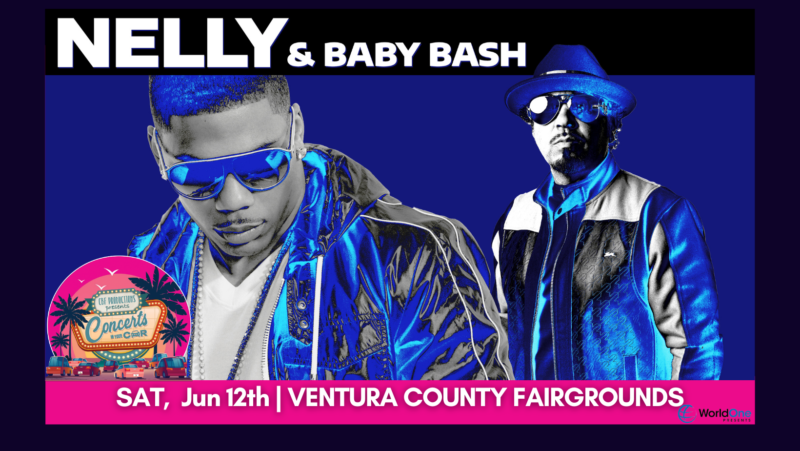 Image Courtesy Of Concerts In Your Car

(Ventura, CA) – A megawatt “Summer Concert of the Season” is coming to the Ventura County Fairgrounds on Saturday, June 12 as Nelly, and special guest star Baby Bash, join the Concerts In Your Car 2021 line up.

A savvy rapper with crossover appeal, Nelly has proven to be a huge hitmaker since 2000 when he debuted his solo album, Country Grammar, which spawned a smash single by the same name. A Grammy Award winner also known for such hits as “Ride wit Me”, “Dilemma”, “Hot in Herre”, “Just A Dream” and more, his decades long career boasts six consecutive Top Ten albums, Platinum singles, and enthusiastically received collaborations.  When the two-time Grammy Award winner isn’t creating hit songs with collaborators or on his own, Nelly ventures into film and television work.

Renowned rapper Baby Bash will join Nelly onstage. In 2003, Baby Bash’s first album with a major label, entitled Tha Smokin’ Nephew, went Gold and produced his first certified hit with, “Suga Suga”. He followed it up with Super Saucy in 2005, which generated the hit single, “Baby, I’m Back”.  He is known for his numerous collaborations and song writing for top tier talent, including his biggest hit and double platinum single, “Cyclone”, featuring T-Pain.

The Nelly and Baby Bash live concert is scheduled for Saturday, June 12th at 8:00 pm at the Ventura County Fairgrounds.  Tickets start at $99. per car for up to four passengers, with additional passenger tickets available for purchase.  The number of passengers must not exceed the number of safety belts/seats in the vehicle. Tickets are sold in advance and online only.

All Concerts In Your Car events include a visual light show and multi-media entertainment.  The combination of an extra high, theatre-in-the-round style, four-sided stage and four over-sized screens ensures that every seat is the best seat in the house.  The events are designed to comply with all state and county restrictions.  Sound comes from the stage like a traditional concert and can also be heard via car stereos on an FM station.   To buy tickets and for more information visit www.concertsinyourcar.com.

ABOUT CBF PRODUCTIONS – In 2020 when large public gatherings were rendered unsafe by COVID-19, CBF Productions launched the first drive-in live music experience in California. They continue to lead the pack by bringing top name talent to their acclaimed live, drive-in, theatre-in-the-round-style and socially distanced entertainment option to the Ventura County Fairgrounds.  From their legendary Boots & Brews Country Music Festivals to Tequila & Taco Festivals, Winter Wine Walks and more, CBF’s visionary events have been on the forefront of the food/drink and music festival circuit for over 12 years.