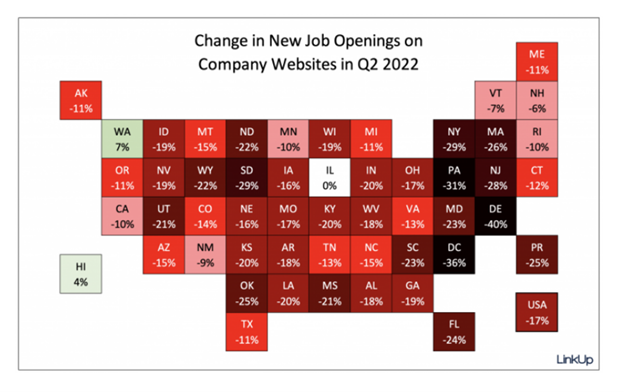 Based on our June data, we expect to see continued weakening in July’s jobs report that will be released August 5th.

The LinkUp 10,000 is an analytic, published both daily and monthly, that captures the sum total of U.S. job openings from the 10,000 global employers in LinkUp’s job search engine with the most U.S. job openings. Representing the entire U.S.

Every month the BLS produces a Job Openings and Labor Turnover Survey (JOLTS).

Along with the its July 7 post, LinkUp posted its job forecast for June.

Given the lag between job openings being posted on company websites and those jobs being filled with new hires, our non-farm payroll forecast for June is based on our data from May when new and total jobs dropped 9% and 5% respectively. As a result, we are forecasting a net gain of just 265,000 jobs in June.

A recession has started yet jobs and employment have not yet returned to the pre-Covid high.

Employment has gone nowhere or down as jobs surge. The employment change since March is -347,000.

See the above link for details.

Expect a Long But Shallow Recession With Minimal Job Losses

Given hiring pressures and boomer retirements, Expect a Long But Shallow Recession With Minimal Job Losses

The stock market is another issue. For discussion, please see Artificial Wealth vs GDP: Why Earnings and the Stock Market Will Get Crushed.