No Love For Commodities 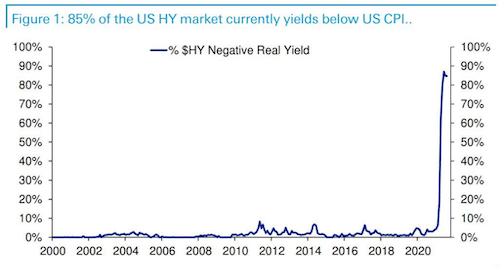 Take a look at this chart and then ask yourself what happens when folks wake to the reality that inflation is transitory in the same way as tofu is tasty?

NO LOVE FOR COMMODITIES

Now, where could that capital seek a safe haven? Hint…

For the majority of investors out there, commodities are still as hated as ever.

To get a better sense of just how out of whack the market really is, it pays to take a step back and truly put things into perspective.

The run we’ve seen so far is far from over. We remain convinced it’s just getting started. Or we’re wrong, and we’re in for some wonderful exponential age of never ending prosperity brought to us by insanely overvalued tech companies and bond markets.

So maybe that, but the probability of it would mean that we would break a cyclical pattern that has lasted with us for hundreds of years. To us, all this seems like a pretty obvious bet.

A lot has happened since we last discussed uranium in these missives a few weeks ago. The yellowcake has been on a tear — up 50% in the last month.

But just to give you some context of where we are in the cycle, here’s a long-term chart of the uranium ETF (hat tip to @NautilusCap for the chart). Side note: the ETF listing nicely coincided with the previous market top in uranium.

So hold on, folks. The best is yet to come.

Adjusted for inflation and annualized, costs are already higher now than for almost anytime in the past six decades, according FAO data. Indeed, it’s now harder to afford food than it was during the 2011 protests in the Middle East that led to the overthrow of leaders in Tunisia, Libya and Egypt, said Alastair Smith, senior teaching fellow in global sustainable development at Warwick University in the U.K.

The below chart comes from Jared Dillian (@dailydirtnap). Over in the UK, food is flying off the shelves. It’s not much different in the US.

IT ONLY TAKES ONE LIGHT TO BURN AWAY THE DARKNESS

Is it acceptable for the State to forcibly and indefinitely close private businesses by decree, without providing any evidence as to why such interference with private property is necessary, proportionate, and constitutional?

This is a question our friend Paul Henderson has been asking in his legal battle against the government. In short, Paul and his family own a small restaurant in the UK, which has now found itself in the government’s crosshairs. But Paul’s not giving up without a fight.

We have a choice: a country with constitutional rule of law and democratic accountability, or a tyrannical sanitary dictatorship that can infringe any human right or legal custom at will. To take no action is to consent to the latter by default.

If you’d like to learn more about Paul’s case and find out how you can support his cause, you can do so here:

MAKING SENSE OF THE WORLD AROUND US

A number of readers shared with us this excellent video about the mass psychosis taking place right now. We have been here before. If you’re trying to make sense of the world around you, then this is going to be helpful.