“Phrogging” Fad Has Many Looking Over Their Shoulders 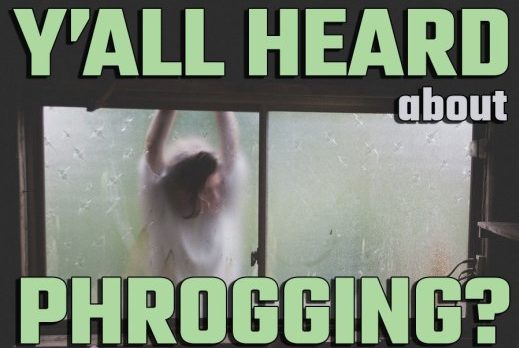 Image Courtesy Of Y'all Heard?

Do some items in your home suddenly disappear and then turn up in different parts of your house? Do you have the uneasy feeling that you are being watched? Do you hear mysterious voices emanating from other rooms – and you live alone? Your home may not be haunted, and you might not be losing your mind. You may very well be the victim of a prankster pulling the Internet-fueled fad of “phrogging.”

The phrogging trend is when the perpetrators, or “phroggers,” move into an occupied home and successfully avoid the people who live there. Big, rambling mansions with unused bedrooms, homes with large basements and attics, and homes that are usually left vacant are all tempting to phroggers, who flit from lily pad to lily pad.

What separates phroggers from other well-known practitioners such as “trespassers” and “squatters” is their practice of secretly photographing the home’s owners who go about their daily business unaware that they are being recorded. These videos are then shared on the darker corners of the web.

The phrogging fad fuels everyday paranoia and touches upon several facets of 21st Century life. The spiraling costs of rent and homeownership; the availability of video cameras on every Smartphone; strange communities that find welcome spaces on the Internet and the homeless situation in America all play a part in this practice.

One classic example of phrogging comes from Taiwan. A nursing student bogged down with classes and night shifts rarely had time to enjoy her own apartment. Unbeknownst to her was that a local homeless man took advantage of the student’s irregular hours to sleep underneath her bed during the daylight hours.

An Internet search will turn up many several examples of homeowners who find out that their homes were occupied by someone else. Videos posted online reveal disused basements containing mattresses and sleeping bags, along with other personal detritus. In even more ambitious examples, false walls discovered during remodeling uncover discarded clothes, books, and health and beauty aids not used by the rightful tenants.

The practice is touched upon as a subplot to many notable films such as The Boy and Bad Ronald.  Phrogging comes into play in the South Korean thriller, Parasite, winner of Best Picture of 2019. In this film, a poor, disreputable family manages to find their way into the immense home of a multi-millionaire by posing as tutors and chauffeurs. Using under-handed skills, the family successfully has the home’s usual employees fired in order to take their place. Their plan backfires after they discover that the former maid has kept her deranged husband hidden away in the house’s basement. Trying to keep up appearances at all costs, the family’s cover is torn away, ending in death and tragedy for all involved.

The tragedy is definitely in the cards for phroggers. All sorts of illegal, those who are caught phrogging have their housing situation solved in exchange for tiny barren rooms with bars across the windows.