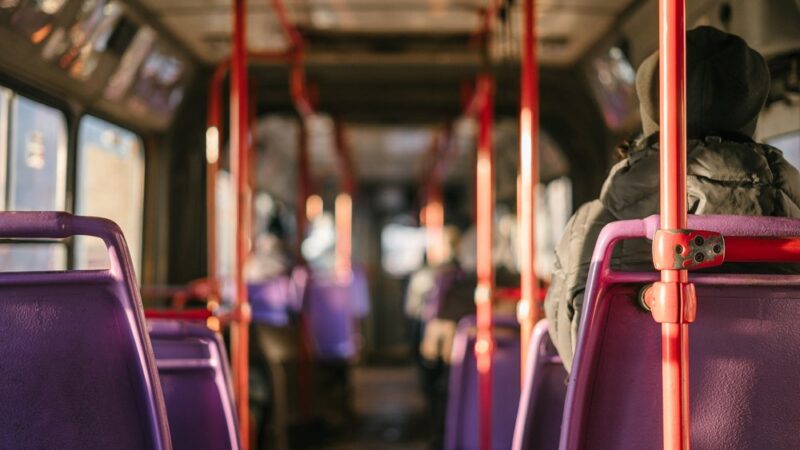 I recently flew from Missoula to Minneapolis, a trip that I usually make by car. Turns out a jet makes short work of the drive that takes two days, so short in fact that I didn’t even have time to finish the crossword in the back of the New Yorker which, for the record, was rated difficult.

This article was written by Karla Theilen and originally published by Strong Towns.

Time constraints would not allow for my usual leisurely drive across Montana, through North Dakota’s Badlands, past the World’s Largest Buffalo and the sculpture of geese in flight that marks the turnoff to the Enchanted Highway, a side trip I highly recommend. I felt a tiny bit lonely as I sailed through the sky above that familiar stretch of road in a metal tube suspended by some tenuous miracle of jet fuel and aerodynamics

Luckily, my plane did not crash, but my Uber app did as soon as I tried to open it after we landed. Turns out the iPhone 8 doesn’t have a big enough brain to accommodate the updated version, even after erasing 400 photos of my dogs.

As the app tried to load, I imagined gears grinding, wires short-circuiting, and the sound of something like a steam locomotive chugging up a mountainside. The phone became so hot I was worried it would melt, or explode in my hand.

“Doesn’t Uber have a phone number?” my mother asked when I called to explain my delay. Though she could rock one of those t-shirts that say, “80 is the new 60,” or “Don’t Mess with the Octogenarian,” my mother hasn’t embraced apps, unless you count spinach dip, or bruschetta.

Besides having the good sense to not to surrender her life to a smartphone, my mom is also smart enough to not drive at night anymore, otherwise she’d have been there to pick me up curbside, flip phone in hand.

Thankfully, a weary traveler without the Uber app can still feel her way through an airport by pictures alone. I found my way to the bathroom, then followed the repeating image of something that looked like a train coming at me head on, emblazoned with the logo for the city’s public transit company.

I boarded the light rail with a two-dollar ticket I’d purchased at a touch screen kiosk with a credit card, an entirely different experience from the last time I took the bus in Minneapolis some decades ago when you needed ninety cents in exact change to ride, everyone behind you waiting impatiently for the last dime to drop into the change receptacle next to the driver.

I settled into my seat, laying the unfinished crossword out on my lap to look busy, and possibly smarter. As I typed my mom’s address into my phone to see what bus I would need to take once the light rail stopped at the transit hub, the screen went black. All of that uphill work trying to download the Uber app must have drained the battery dry. With my question still dangling out in cyberspace, I longed for one of those trifold paper bus schedules from the old days, printed in impossible five-point font.

Some minutes later at the transit hub, a woman approached me as I stood trying to decipher the bus schedule grid through scratched and smudged plexiglass. “Where are you trying to go?” she asked with such authority, I imagined she was one of those goodwill ambassadors for the transit company. I expected to see a vest, or a name tag, but she was just an ordinary citizen with the superpower of spotting a traveler in distress.

I gave her the cross streets in Northeast Minneapolis where I was headed and she nodded briskly, smiling. “Lucky you, that’s the number 32! My bus, too!” I felt like Alice in Wonderland, waiting for a riddle to follow her rhyme, and braced myself for a rabbit hole to open up beneath us.

Instead, in that instant kinship of travelers who realize they’re headed to the same destination, she grabbed me by the arm and led me across the street where the number 32 waited for us, door open, lights burning bright.

The woman leaned in to tell the driver, whom she knew by name, where her “new friend” needed to go. The driver reassured me that the bus would take me to my destination, and that she’d remind me when it was my stop. Even though I felt like I was off to my first day of kindergarten as I boarded the bus, it was a relief to know someone capable was now in charge.

I slid in next to a woman in navy blue scrubs who appeared to be on her way home from work, leaning against the window and eating a salad out of a plastic container. My guess is that the salad was probably intended for lunch, but she never got a lunch break to eat it. I’m a nurse, too, I wanted to tell her, commiserating on how many times I’d also hauled an untouched salad home at the end of the day. But she looked tired, so I just smiled knowingly.

A wave of teens rolled in at the first stop, smelling of dryer sheets, Axe body spray, and a whiff of fresh-cut grass. On the evening air, still warm and humid, wafting in behind them, I swore I heard strains of a marching band and a football referee’s whistle, and maybe even the smell of popcorn.

The teens made their way past a man shuffling through a huge stack of papers, two women in knit hats exchanging chemotherapy stories across the aisle, and a young woman wearing huge white headphones and a Taco Bell uniform singing loudly, joyously off key, along to music only she could hear. They stood in the aisle, gripping hand loops with one hand, scrolling through phones with the other, a staccato chorus of laughter as everyone apparently watched the same video on TikTok, over and over.

Rolling through the streets, the mass of teens swayed as the bus rocked gently from side to side and I was lulled back to a time long before smartphones, or Uber, to a cold January morning when I stood on a sidewalk in the very same city waiting for a taxi to take me to the airport.

I remember looking down the dark, quiet street, my stomach aching with impatience as time ticked by. The only other sign of life was a woman scraping ice and snow off of the windshield of her idling car parked at the curb.

“You okay?” she’d shouted through the frozen air, and for some reason, probably desperation, I’d told her everything. I explained I had called a cab an hour ago, and that I was worried I would miss my plane. “You’re in luck,” she’d told me, “I’m headed to the airport right now,” and opened the passenger door to her already-warm car.

Maybe, I realized staring out the tinted bus window into the warm September night so many years later, my superpower as a traveler was sending out the right kind of distress signals.

Suddenly, the bus driver chirped out the name of my stop over the speaker in such a genial way that I half expected the “ding ding” of the trolley from Mr. Rogers’ Neighborhood.

The woman who had helped me earlier turned around, beaming, and nearly shouted, “That’s you,” motioning encouragingly with her hand for me to get up.

Everyone on the bus turned to watch as I grabbed my carry-on bag. If it were an 80s movie they might have applauded as I walked by, and I may have flung my glasses off, instantly transformed from a bedraggled traveler into a prom queen. Anyway, I was grateful I’d decided against checking a bag, imagining the scene of rolling a huge suitcase down the crowded aisle, which, even without applause, would be embarrassing.

I waved at the driver and the helpful woman and stepped off the bus with a sense of accomplishment. Once my feet were on the sidewalk, I reflexively reached for my phone, the screen of which was still unresponsive and black. I slid it into my bag where it could stay for the night, or for the rest of my trip as far as I was concerned. After all, I was already where I needed to be.