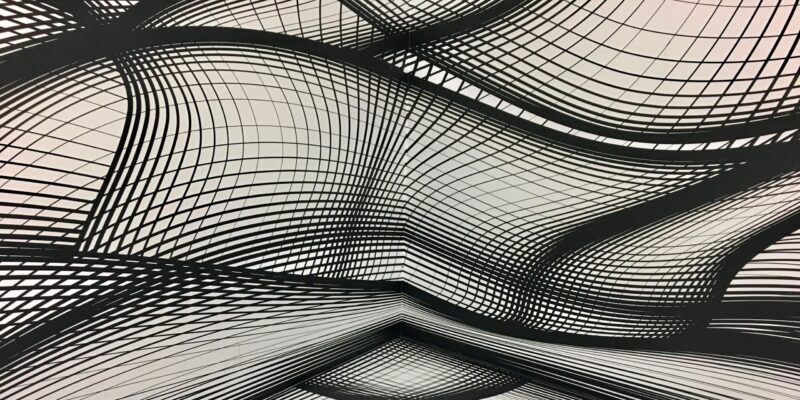 In the belief that pirate sites only stay online when they’re returning a profit, City of London Police decided that deprivation of revenue should be a key strategy in its fight against piracy.

Launched in 2014 and controlled by the Police Intellectual Property Crime Unit (PIPCU), the ‘Infringing Website List’ (IWL) carries details of pirate sites nominated by rightsholders and provides the basis for future enforcement via escalating actions.

After PIPCU forms an opinion that a site is probably illegal, it sometimes makes direct contact with site operators. Warning of potential prosecutions for offenses under the Fraud Act 2006, Copyright Designs and Patents Act 1988, and even the Serious Crimes Act 2007, PIPCU suggests shutting down as an alternative.

Welcome to the Blacklist

Funded by the government and run by City of London Police under the banner of Operation Creative, the IWL is supported by major rightsholders, including the BPI, IFPI and The Publishers Association, plus international groups such as the MPA.

The IWL is shared among brands, advertising companies, agencies and affiliates, who are informed that responsible companies boycott pirate sites because it a) protects their image and b) starves pirate sites of much-needed cash. Anti-piracy groups are also given access to the IWL but despite footing the bill, ordinary people aren’t granted access to the Operation Creative portal in order to view it.

Well, in theory at least.

The IWL is in a constant state of flux due to the addition of new domains and the removal of others. That being said, we believe that 1,530 domains are on the list right now, including torrent sites RARBG, 1337x, TorrentGalaxy and YTS. The list also includes several domains referencing Pirate Bay but as far as we can see, the site’s main domain isn’t present.

Streaming giant Fmovies is listed several times across multiple domains along with Bflix and Soap2Day. YouTube-ripping sites such as Yout and YTMate are also blacklisted, along with many others serving specific foreign language markets.

The list appears to cover the most important targets and hundreds of domains many people will be completely unaware of. That’s in addition to a few hundred others that could disappear overnight without anyone noticing, but that’s partly the point of the list.

All sites start off slowly but when more famous sites get blocked, sudden growth can appear from nowhere. With fewer advertising opportunities, it’s certainly possible that sites with the potential to get bigger will throw in the towel before that can happen.

More than 6,000 Domains Have Ever Appeared on the IWL

The 1,530 figure initially came as a bit of a surprise since we expected many more domains to be listed. That being said, an indexing scheme used in the IWL allows us to have an educated guess at the total number of domains targeted since its inception in 2014.

Our estimate is 6,039 domains, which leads to the tentative conclusion that around 4,500 domains have been removed from the list over the years. Based on the assumption that sites stay on the list until they stop infringing, one might draw the conclusion that after appearing on the IWL, 75% of sites either clean up their act or simply die.

That kind of result would be something to shout about but the IWL deals in specific domains, not sites per se. It’s possible that a single site could have had many domains and may have appeared on the list many times over the years. Plug-and-play sites also have a tendency to quickly respawn with new identities and new domains, muddying the waters even more.

The reality is that we don’t know all of the details and given the secrecy to date, that’s not likely to change. What we do know is that the UK government is very keen to know everything and is willing to spend taxpayers’ money to find out.

According to the official government portal Government Online, between 1,200 and 1,500 government tenders and contracts are advertised each week. On October 10, the Intellectual Property Office called for quotations on the following:

A tracking portal, providing data on advertising streams for requested websites, which are considered to be involved in copyright infringement.

“This tender is being run by the Intellectual Property Office (IPO) and the contract will vest with and be paid for by the IPO. The benefit and outcomes of the services will be delivered by the supplier to the Police Intellectual Property Crime Unit (PIPCU), who are a strategic partner of the IPO,” the tender reads.

“The initial term of the contract shall run from the date of award (following this tender process) to 31 March 2024. This is anticipated to be 15 or 16 months.”

Data Sought By The Government

The Intellectual Property Office lists several minimum requirements for its portal, including the following:

• Total amount of adverts and estimated advert impressions across IWL domains
• Total number of brands and total number of advert intermediaries
• Total IWL domains that have advertising on them
• Advert campaign type e.g., major brands, gambling, adult, or sponsored
• Ability to click on a domain and get a screen shot of the domain and the advert
• Data must be visually represented though charts and diagrams.
• Being able to focus on one or selection domains
• Being able to focus by campaign type, e.g., brands or gambling
• Being able to focus on a particular brand
• Provide a quarterly report in a particular area such as gambling adverts

The specifications suggest that in addition to measuring the volume of ads keeping pirate sites afloat, the IPO may need data to support measures against specific industry sectors, perhaps through education, persuasion, or other means delivered by strategic partner, PIPCU. 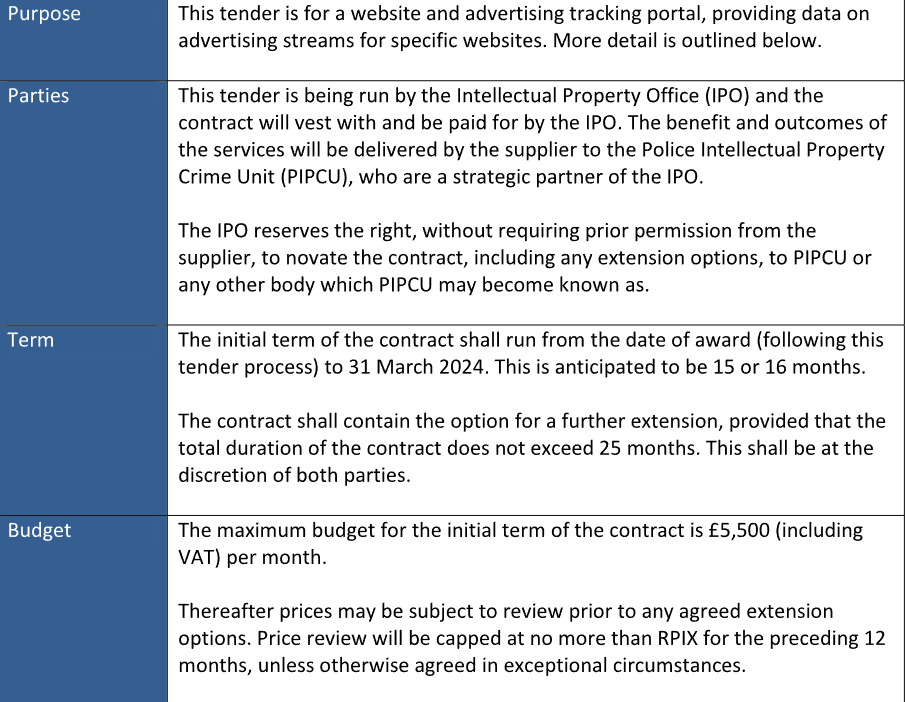 The tender indicates that while the IPO will be paying the bill, all services will be delivered to PIPCU. The initial contract is expected to run for 15 or 16 months, with an option to extend up to 25 months.

The maximum budget for the initial term is £5,500 (including VAT) per month and while all companies will need to endure the bidding process, it seems more than likely that White-Bullet will pick up the contract.

The company specializes in this kind of work and recently won a new contract to maintain the database behind the Infringing Website List.

Finally, a paragraph in the tender caught our eye as being a little out of the ordinary and if the claim is true, PIPCU may have a softer side that’s never publicized.

The Police Intellectual Property Crime Unit is well-known for blacklisting sites, taking down people involved in streaming piracy, seizing tens of thousands of domains related to counterfeiting, and carrying out similar enforcement operations.

Interestingly, the Intellectual Property Office’s description of the unit suggests something much more than that.

“Operation Creative, for the first time in the UK, heavily focus on early intervention seeking to engender the principles of restorative justice as a means of providing early warnings to offenders, giving them the opportunity to develop their businesses into legitimate practices,” the IPO explains.

The concept of restorative justice has been gaining traction in UK government circles for some time. The theory is that by opening up lines of communication between criminals and their victims, the parties may be able to find ways to repair the harm and discover a path forward.

The problem here is that sites are put on the IWL blacklist because they are overwhelmingly used for piracy, their operators are proven to be uncooperative, and in many cases their sites have already been blocked in the UK based on a High Court injunction.

The suggestion that after all this they might be invited round for a cup of tea with the MPA or BPI, to discuss where it all went wrong and how to move forward, seems utterly incredible. Times are changing, no doubt about that, but things don’t change that much, surely?