Proof That Trickle-Down Never Even Dribbled Down 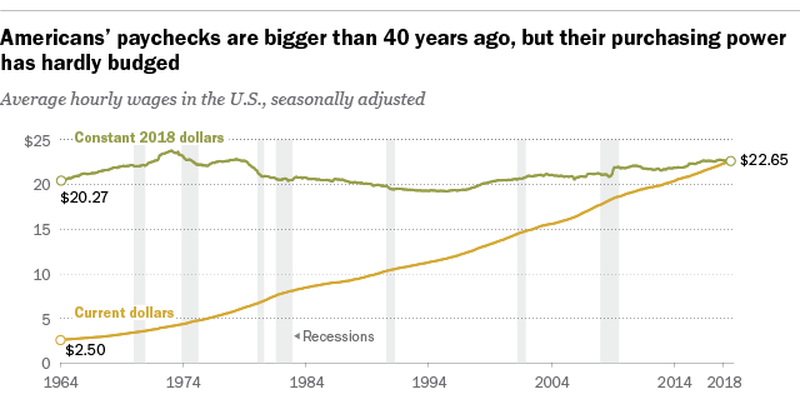 Want to see a crystal-clear picture of who has been helped the most by decades of trickle-down economics, who has gone nowhere and who has actually gone slightly downhill? Well, here you go:

Everyone has gone essentially nowhere, except the top 10%.

Clear proof that throughout the years of trickle-down economics (primarily created by huge reductions in capital-gains taxes — capital gains being where the rich make their money) nothing has trickled down. Everyone has gone nowhere or even down, except the rich.

Interestingly, no one went anywhere in accumulated wealth as a result of the Trump Tax Cuts, which became effective at the start of 2018, not even the rich. Yet, the nation did go deeper in debt due to the combination of tax cuts and increased government spending. So, how is anyone better off?

This graph also demonstrates the fact that years of Fed money printing after the Great Recession also helped no one … except the very rich, who quickly scrambled back out of the hole. That, of course, was because all Fed firepower was poured directly into bonds and then stocks — capital assets. So, the explosive fuel went into capital assets at the same time the taxes on their gains remained down.

Over an even longer timespan, here is what happened to wage earners, (as opposed to the 10% above who make their money from investments):

In nominal dollars, you would think the average wage has been steadily rising quite well (yellow line); but, adjusted for inflation, wage earners are lower than they were at their last peak in 1974. As a person who has grown older during that time, you may not have felt the full stagnation because, most likely, you migrated up in rank at your job or moved on to better positions or companies as your skills and experience rose. The average wage, however, held flat, adjusted for inflation. What that means, if you are a wage-earner and an average guy or gal for your age, is that you are not doing any better than someone in 1974 who was at the same point in his or her life and career as you are now.

That is what helps keep suppress revolt. As individuals, everyone who has lived a little thinks they’re a little better off because their social station climbs with time as it should with decades of work because their individual skills and value grow; but they’re not doing any better off near the end of their lives in terms of their wages than what people in 1974 were doing near the ends of their lives. It’s a mirage that moves forward with you as you move forward in age. In other words, the average sixty-year-old today is making the same as the average sixty-year-old in the 1970s, while the average twenty-year-old today is making the same as the average twenty-year-old in the seventies.

You may still wonder how it is that it seems the standard of living has risen with bigger homes, etc. As a parent, for example, you may have a nicer home than your parents had when they were your age. The answer is one word: “debt.” Americans have increased their standard of living only by piling up debt — a mountain of it — much faster than population growth: As you can see, Americans deleveraged slightly during the Great Recession, but then they piled up debt higher than ever before at a faster clip than ever before as the Fed’s low-interest policies enticed them to build their standard of living on debt since they could not do it by any other means. The talk of late about people reducing their debt is that tiny little dip at the very top of the mountain.

Now, all you need to do is flip the graph upside down because debt is a pit if you are on the side that owes the debt, not a mountain of assets, as it is if you own it where people are making payments to you. Then you get a sense of the depth of the abyss that Americans live in to maintain their lifestyles.

The above graph is just consumer debt, not corporate or government, classified based on who owns the debt as an asset, not who owes the debt. The graph is not inflation adjusted or population adjusted, as I could not find such a graph. The Fed goes by the following graph, which is classified by type of debt, but doesn’t say how it is adjusted or is not:

Regardless, it’s quite the mountain compared to years before the turn of the century.

As you can see, there are really just two classes in the US — the Rich and the Rest. The balance of wealth would be disproportionate enough if the top 10% owned as much as the remaining 90%; but they own 40% more than the remaining 90% combined. Yet, the Rich have only a third of the debt the Rest have (or about a quarter of the total consumer debt).

If you’re starting to see that the capital-gains tax is stacked against you for life because it has never trickled down, wait until you see what has happened with dividends — the easiest of easy money that pools luxuriously and almost exclusively around the rich:

I call it the easiest money because it not as risky as the rise and fall in asset values. Yes, dividends can go down, but they don’t take nearly the ups and downs of daily stock price changes. It is another arena where the extraordinarily wealthy make most of their money, but pay the lowest of all tax rates. This puts the upper bracket for one of their major sources of income at a level that is actually far below the middle class. Why do we stand for it?

It’s a trickle-down tax cut that does not ever trickle down at all all. You see, “qualified dividends,” which encompass most dividends from US corporations, are paid to investors by companies that choose to pay out their profits as dividends instead of reinvesting them. Those dividends, which are all shunted away from corporate reinvestment, are taxed at even lower rates than the already low capital gains rates, that break becomes even greater because of how they are bracketed.

This is where trickle-down economics is an outright lie. Dividends are created by not reinvesting profits in new factories, not developing new products, not expanding markets and, therefore, not creating new jobs. There is nothing wrong with paying the owners directly from profits, of course, but it evaporates the argument that the capital-gains tax break and the exists to create jobs through reinvestment. Dividends, given and even more special rate, are exactly the money that is not reinvested by the corporation, and may become the money the rich just spend on more ancient art works or football teams. They are an enticement away from reinvestment.

The game is rigged

Is it any wonder that, with all benefits inuring to the wickedly wealthy for the past half a century, we see increasing interest in socialism in this country? (I say “wickedly,” not because wealthy are inherently wicked but because how wickedly they have rigged the government to give themselves even lower taxes than most of the rest of us.)

It was decades or even centuries of greed in other capitalist nations that eventually drove the peasants to rebel and grab socialism as a ladder out of their abyss. It has proven again and again to be a ladder that failed them miserably, but when you spend decades down in a pit watching the rich throw parties around the top of the pit and smelling the scents of feasts that waft down to you, you take whatever ladder you can find that offers hope, even if it turns out to be false hope.

Of course, the failure is not capitalism, it is greed — greed that repeatedly gives the biggest tax breaks to the rich by focusing tax breaks on the areas where the rich make all their money, greed that gives all the new money to the rich by creating it inside the nation’s wealthiest banks from which it gets invested into stocks and bonds and other capital items where the rest of the rich make all their money, and all that bond buying lowers the interest they pay on debt used to invest in stocks. It’s a rigged game that is driving the US populace toward socialism because they see for years and years the only ones who keep getting ahead are the pigs at the top of capitalism.

But the problem is not capitalism, per se, it is crony capitalism where the rich rule the rest by owning the politicians in order to create tax structures, banking systems and regulations that drive all the money to the top. In most capitalist societies that have followed this path, the rich continue along fine for awhile until they get too greedy for too long and then eventually face a bloody revolution. If we don’t change these privileged tax structures that have been overplayed on capitalism to the benefit of the top 10%, that is where we’re headed.

If you create a capitalist society where you drive all the tax breaks and new money to the bottom of the pit so it has to bubble up for the rich to get their hands on it, then the poor and the middle class will rise slowly up the ladders provided and join the rich. In the meantime, the rich will have to create factories and produce things the poor and middle class want to buy with their tax savings in order to get any of that money out of the pit.

Of course, being a democracy, we don’t need a bloody revolution to change things. We could do it without blood if we could get our voting machines to work right … but also if we could get our populace to realize that billionaire presidents who put billionaire banksters in charge of all the financial controls in the nation are not working to help the poor or middle class. It is, after all, the middle class that keeps voting for this kind of government, thankful for the few sweet drips they can lick from the trickle.

If they ever wake up to how long they’ve been fleeced, the clawback could be ferocious.

This article was written by David Haggith of The Great Recession Blog.