Ranked: America’s Most Searched And Visited News Sites By State 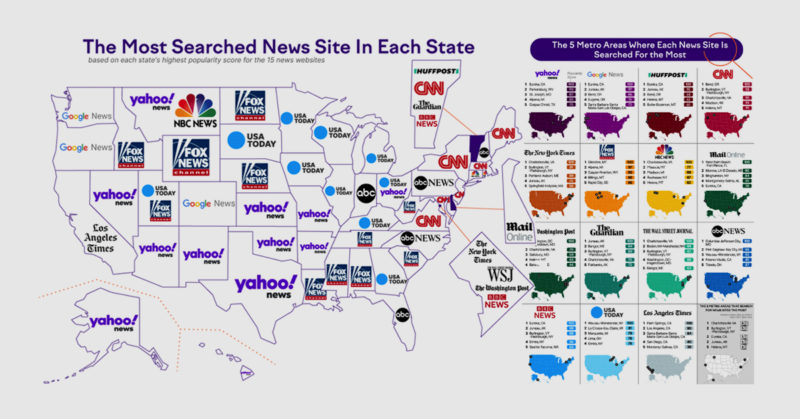 America is known to have significant distinctions at the state-by-state level, and data suggests this trend extends to popular news sources. To learn more, this infographic from SEMRush ranks U.S. news websites by search volume and popularity across U.S. states.

This article was originally published by the Visual Capitalist.

Here’s how the top 10 news sites compare when ranked by monthly visitors, as well as the number of states the news source is most searched for in:

The Most Popular News Sites

Yahoo News is the most popular news website in America, bringing in a massive 175 million monthly visitors. In addition, they’re the most searched for news site in 12 states—the highest of any website. The company’s history has been a roller coaster ride and at different times Yahoo intended to acquire Google and Facebook. Both companies went on to be worth over $1 trillion each, while Yahoo shrank some 90% from when it was once worth $125 billion.

The New York Times has 60 million monthly visitors, but in recent years, has pivoted towards the coveted and trending paid subscription model. This decision is paying off well, as the site now has 6.1 million paid subscribers—more than any of its competitors. Consequently, the New York Times’ share price hit a record high in December 2020.

HuffPost, and their audience of 110 million, were bought by BuzzFeed from Verizon in November of 2020. The two organizations have some history together, as BuzzFeed co-founder Jonah Peretti was also one of the early founders of HuffPost.

CNN is seeing a fall in ratings ever since Donald Trump left office. By some measures has witnessed a 36% decline in primetime viewers in the new year.

Overall, the modern news industry has been a tough landscape to operate in. Here are some of the reasons why:

First, the internet has removed barriers to where people obtain information, and revenue streams have been disrupted in the process. The advertising business model of news organizations is cutthroat to compete in, and there has been plenty of consolidation and layoffs.

Lastly, trust in traditional news and media organizations has been declining amongst Americans, from nearly 60% to 46% since 2019.

To add to this, on a global basis, the U.S. ranks well below most major countries based on trust in news media.

Some organizations like The Washington Post and The New York Times have opted out of the advertising model, moving towards the direction of premium subscriptions. But only 20% of the Americans pay for their news, which could lead to stiff competition down the road.

The Future Of News

There are serious concerns about the future of news in the era of spreading misinformation. Up to 43% of Americans say the media are doing a very “poor/poor job” in supporting democracy. But despite this waning trust, 84% of Americans view news media as “critical” or “very important”.

What will the future of media look like throughout the 21st century and how will this impact the most popular news sites of today?