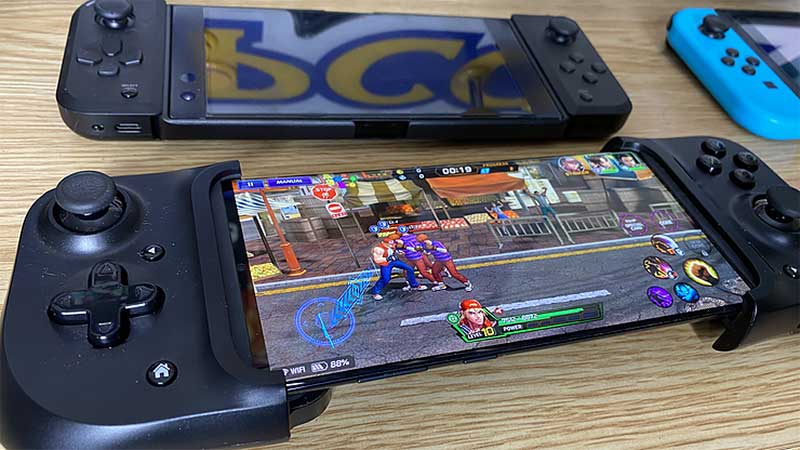 Mobile Gaming. What comes to mind when you hear that term? Angry Birds? Candy Crush? Or some pay to win style game?

Where to Buy: https://amzn.to/3huAArb
*Product Provided by Razer*

Mobile Gaming is viewed by many people in many different ways and when you look at the West; we mainly view it as something to kill time and not something that is a legit gaming platform even with amazing services like Xbox’s Project xCloud and more delivering the console experience in the palm of your hand. In the East; mobile gaming is and has been for several decades as a major gaming platform and the platform of choice for many to game on given how many are always on the mobile devices for not only social media and work but gaming above all.

Razer has been pioneering the mobile gaming market for years now with devices such as the Razer Phone and Razer Phone 2, Razer Raiju Mobile, Razer JungleCat, and now they release their newest universal controller for Android smartphones and coming soon to iPhones; the Razer Kishi. The question now lies with can Razer once again set the bar for the best mobile controllers on the market in an endless sea of 3rd party controllers? Let’s find out!

I have to be honest, when I got the box for the Razer Kishi I was shocked at how small it was and was confused as to whether or not it was bigger or smaller than the Razer JungleCat because the JungleCat’s box was bigger; but then I remembered that it came with cases to use on the few smartphones that It is compatible with such as the now-defunct Razer Phone 2 (a great phone that should’ve gotten more love), Galaxy S9.and Oppo Phone. With the Razer Kishi, it’s simply a matter of one device that you slot almost any modern android smartphone in (sans the Razer Phone 2) and that’s it; you’re set to go. Hands-on; it feels incredibly comfortable with a nice back that allows you to rest your ring and middle fingers on it and has your index finger lay comfortably on the top L1/2 and R1/2 triggers.

The thumbsticks are laid out in the same fashion as an Xbox One or Nintendo Switch Controller with the sticks being opposite of one another. The sticks have a very good response to them when playing games and at times I forget im not using an Xbox One Controller.

The DPad is where a lot of controllers like this mess up as many are too shallow, too stiff, awkwardly placed, or completely unresponsive and thankfully Razer came through like a champ and made a DPad so good that it makes you think you’re using a Nintendo made DPad. For me this is essential because I play a lot of fighting games and 2D games and both require extreme precision and this controller delivers just that. Now when it comes to shooters this controller is truly the GOAT as it has incredible accuracy.

The face buttons are laid out in the Xbox format and are responsive to the touch with a glossy look and tactile feel. The back triggers feel just about the same as the Nintendo Switch and Switch Light with a solid clickiness. There are additional function buttons on the controller to represent Start, Select, and Home with the 2 function buttons on the left side above and below the DPad as well as the 1 on the right side near the right analog stick. You’ll find below the right side of the controller is a USB Type-C passthrough for charging your phone while you game which is awesome given that other controllers like this do not offer that option.

Whether I’m playing games like PUBG, Black Desert Online Mobile, The King of Fighters All Stars, Castlevania, or emulators; the controller is incredibly top-notch, responsive, and feels good in the hands.

The Razer Kishi is made of a plastic material that doesn’t weigh too much by itself and is compact. The buttons and shoulder buttons are all solidly made with that console quality feel to it. The elasticity of the band that allows you to stretch the controller to fit the modern curved phones that are available. One of the things you’ll notice is that the controller is made in a collaboration between Razer and GameVice which is one of the reasons why the controller is made the way it is with its universal fit and ultra-low latency. All in all, an exceptionally well-built controller.

There are several games natively on the Google Play Store that will work plug and play with the Razer Kishi which to name a few are the following:

Now many of you may be interested in how this works with Cloud Gaming as that is the new platform for many to easily get into gaming and I am here to tell you it works excellently. The Razer Kishi works so well with using cloud gaming applications such as NVIDIA GeForce NOW, Google Stadia, and Project xCloud. So long as you have a solid internet connection; all you need to do is select the game you want to play on your respective application and the buttons will be automatically mapped to the Kishi controller and you’re all set and ready to game!

I fired up Project xCloud and played some Gears 5, Bloodstained, Black Desert Online, Yakuza 0, and Halo: The Master Chief Collection. Gears 5 and Halo: MCC played significantly better with the Razer Kishi in comparison to the Razer JungleCat due to the travel of the analog sticks not feeling as shallow as the JungleCat making precision shots much better and with the ultra-low latency of the Kishi vs the Bluetooth of the JungleCat. Bloodstained felt so good with the Kishi along with BDO and Yakuza 0 played phenomenal with my inputs having no input delay and instantaneous.

Just as the Razer JungleCat gave us the Nintendo Switch like feel for mobile gaming, the Razer Kishi has truly given us that and more without the need to rely on Bluetooth to function the controller and it also gives you that full feature console-quality controller giving you a lot of comfort as you game. Comfort is a very important aspect of this controller due to its ergonomic nature so at no point will you feel discomfort in your hands and fingers from prolonged play sessions.

The form factor of being able to slot your phone into the controller when you want to game and then to stow it away when you are done is second to none and doesn’t require you to need to have any of the special cases or needing to charge the controller: the simplicity truly sets this apart from the rest.

If you’ve got any modern Android phone and want to be able to game with the best controller on the market with ultra-low latency, charging pass-through while gaming, and all in a compact form factor with a solid price at 79.99$; then you can’t go wrong with the Razer Kishi as its simply the best controller you can get for your Android device hands down and it is honestly worth every penny!