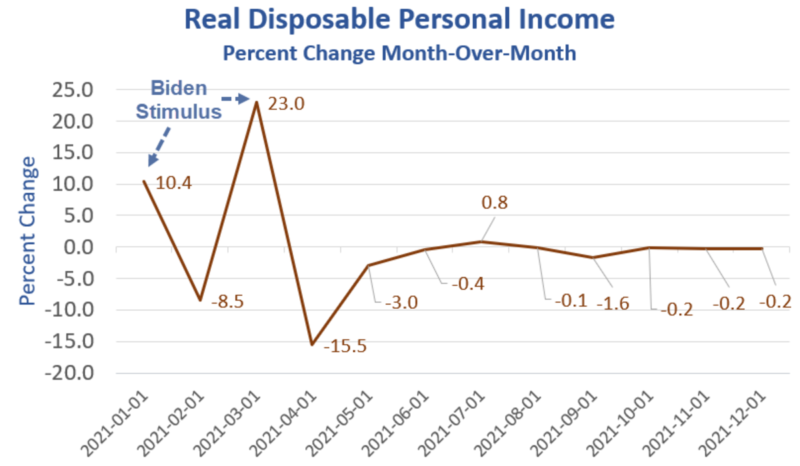 Inflation has eaten up every penny of income gains for the last year. Today the Bureau of Economic Analysis released Personal Income and Outlays data for the month, and it looks grim.

Personal income is on a slow exponential rising trend. But all of that is due to population increase. A good way to account for growth is on a per capita basis.

With boomers retiring en masse, guess where this is headed.

4th Quarter GDP Up 6.9% Is Mostly An Artificially Boosted Illusion

The impact of three rounds of fiscal stimulus are over. Meanwhile, a massive inventory build by merchants is underway.

I discussed the current setup in GDP Up 6.9% Is Mostly An Artificially Boosted Illusion

Change in Private Inventories (CIPI) added a whopping 4.9 percentage points to real GDP in the fourth quarter. Since inventories net to zero over time, the true bottom-line estimate of real GDP was 2.0%.

Thus, of the reported 2.3% GDP gain for the third quarter, nearly the entire rise was an inventory adjustment.

On January 14, I noted Retail Sales Unexpectedly Flop in December, Down 1.9 Percent

The Fed has everything under control. So, what can possibly go wrong?

I now expect a recession no later than the end of 2023.