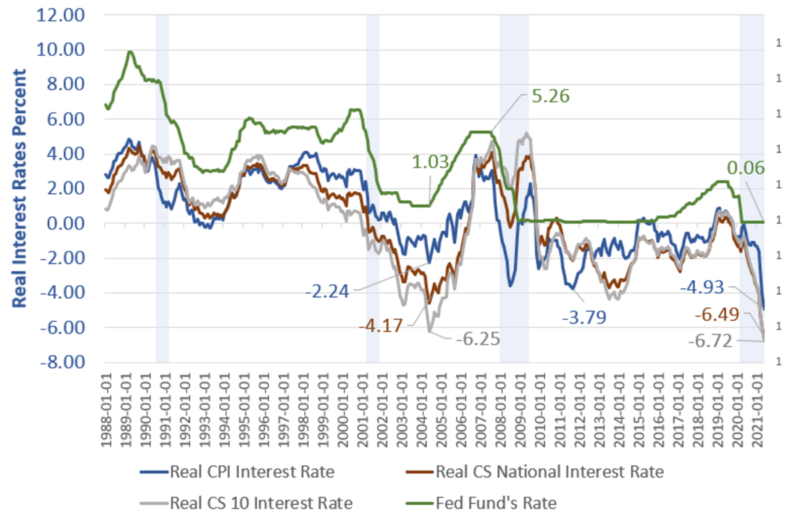 Fueled by negative real interest rates, the Fed has blown another housing bubble.

Real means inflation adjusted. But what is the best measure of inflation?

Home Price Not in the CPI

Home prices are not in the CPI. They should be. Economists generally disagree with me, but what good is a measure of inflation that excludes key prices?

Q: How relevant is the CPI as a measure of inflation?
A: Not very if at all.

The Fed has ignored those things at its peril.

The reason economists ignore housing is they view it as a capital expense. So what? Are we measuring prices or just the ones that allow bubbles to be easily blown?

It’s not possible to include prices such as stocks in the basket because they vary with earnings, but repeat sales of the same house and medical expenses are a different matter.

Personal Consumption Expenditures (PCE), the Fed’s preferred measure of inflation does take medical prices into consideration, but at the expense of even greater housing distortions.

What the Chart Shows

The standard measure of “real” is made by subtracting year-over-year CPI from the Fed Funds Rate or 1-month T-Bill.

But that does not include housing. The BLS housing component includes rent of primary residence weighted at 7.86% and OER weighted at 24.26%.

OER stands for Owners’ Equivalent Rent. It is an estimation of what homeowners would pay in rent if they rented their own house, from themselves, unfurnished, without utilities.

I calculated the CS-CPI by substituting actual home prices as measured by Case-Shiller for the OER component.

Most Negative Rates in Series History

Both numbers are deeper into negative territory than in the housing bubble years.

The Case-Shiller housing data goes back to 1987. Year-over-year calculations start in 1988.

Home prices are up 111 consecutive months through May. The most current Case-Shiller data is from March.

To use CPI data through May, I replicated March Case-Shiller data for April and May.

Given further housing price increases, it’s safe to assume that real interest rates are deeper than -7.0%.

Yesterday, I gave Congratulations to Chicago and Las Vegas, the Only Major Cities Whose Home Prices Have Declined Since 2007.

Those are not median prices. Case-Shiller data reflects repeat sales of the same house over time.

The above chart brings up another issue with measuring the CPI, extreme price variations. And the issue applies to many things, especially housing, health care, and education.

Those in college experienced rapidly escalating tuition. Those not in college pay no college tuition at all. Try telling kids in college that education is only 3.03% of their expenses and see what they say. But that is what the BLS says.

The BLS takes all of the price data, weights it, then averages it all together, thereby dramatically undercounting inflation for everyone in college as well as everyone who buys their own health insurance. On top of it all, the BLS ignores housing as discussed above.

The Fed then takes these absurd BLS measures of inflation, then decides for no explained reason that “on average” inflation should be 2%.

I have news for the Fed: 7% is far better measure than whatever the hell they are looking at.

The Fed defends its actions in the name of “price stability” and actually wants to boost inflation even more to make up for inflation that was allegedly too low for years.

Housing and speculation are all the Fed has. And part of housing is speculation including FOMO, fear of missing out.

Zoomers prefer to call it YOLO. You only live once. On the YOLO theory, Dogecoin is a great buy.

Perhaps Dogecoin goes to $5. If so, hooray. If it goes to zero, so what? It’s YOLO. There’s always something else to speculate in and make up losses.

That is what the Fed is encouraging, either on purpose or out of ignorance.

Take your pick, but the result is the same: Cheap money encourages speculation in assets.

Despite wage increases, Real Hourly Pay Is Losing to Inflation. “Real” in that link means a 5% inflation adjustment not a 7% adjustment as calculated above.

The Fed’s explicit inflation policy is nothing other than financial repression of the poor for the benefit of asset holders (the wealthy).

Sadly, people in the US are likely to say “Look at what China is doing to its people” without stopping to think the Fed is doing the same damn thing.

I have many time proposed ending the Fed.

I am often asked “Replace the Fed with what?” The answer is “Nothing”. We do not need a group of charlatans who would not recognize “inflation” if it jumped up and spit grapefruit juice in their eyes.

We need sound money, not the Fed whose goal is to destroy money at the rate of 2% a year to the guaranteed detriment of the poor and middle class.

The Fed says inflation is transitory. The Fed is correct but for a hugely wrong reason.

Inflation is transitory because the Fed itself has sown the seeds of another economic collapse.

Speculation eventually dies out. All bubbles burst. When that happens, the result is anything but inflation.