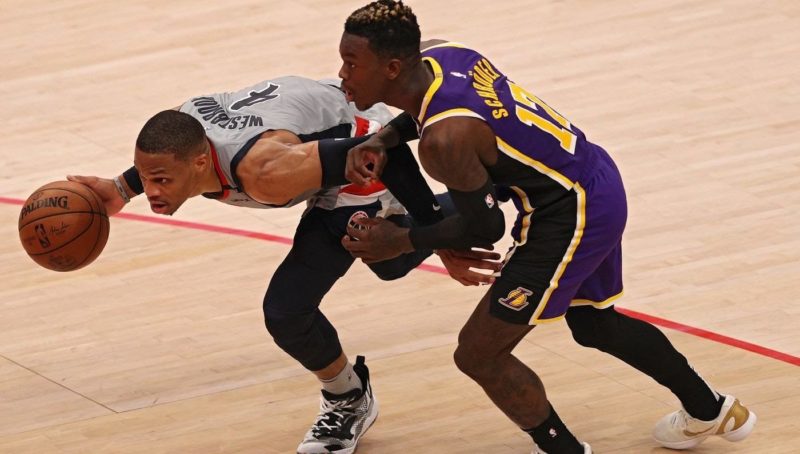 As the Los Angeles Lakers prepare for a crucial offseason, it’s no secret that a high priority for them is a veteran point guard to run offense, particularly when LeBron James is sitting.

This article was written by Honi and originally published by Lakers Outsiders.

With Chris Paul now having lost the NBA Finals, there’s been some speculation about him opting out of the final year of his massive contract to ring chase with his close friend. According to Marc Spears of the Undefeated, Paul is an option for the Lakers, but Spears is also reporting a more surprising option: Russell Westbrook.

Paul has long been seen as an ideal fit alongside James and Davis as well as someone who can get the most out of the Lakers’ role players when LeBron is not on the floor. He showed his still tremendous value on the Suns this season, albeit on a much younger n team that needed his leadership and expertise in a different way than the Lakers do.

Paul still lives in LA and his relationship with LeBron is certainly enticing of this speculation. However, in order for such a marriage to realistically happen, Paul would have to opt out of his contract to either take a massive discount and sign on the taxpayer mid-level exception or to take a smaller discount to be signed and traded to the Lakers. That is complicated, of course, by the fact that the Suns would have to facilitate the move and by the fact that it would automatically hard cap the Lakers, lowering their flexibility to fill out the edges of the roster. That might not matter as much with James, Davis and Paul as your top three but it’s certainly worth considering.

The Westbrook angle is a little different. The Lakers would not be hard capped by trading for the point guard but his $44 million contract will do plenty to limit the Lakers’ flexibility. As Spears reports, the Lakers would likely have to include Dennis Schröder by signing him first, then trading him but of course that relies on the Wizards wanting to pay Schröder what he believes he deserves. Perhaps a four-year $100 million deal is more palatable than Westbrook’s remaining two years at nearly the same total cost, especially if they opt for a rebuild through trading Bradley Beal as well.

On the court, the Westbrook fit is a little more clunky. He does not have the shooting ability of Paul which limits spacing when he is on the floor; that could potentially have the side effect of taking James and Davis further away from the basket for Westbrook’s sake which might not be a worthwhile sacrifice. He is also a poor and often lazy defender, though with the ability and physical tools to turn it on at times. Still, there’s no denying his talent and he had a pretty great season in helping drag the Wizards to the playoffs after a terrible start to the year. Perhaps in the Lakers’ system alongside LeBron, he could fall more in line and be a net positive contributor.

Either way, these are very early discussions happening and there’s no guarantee that the Lakers ever seriously approach these players. For all we know, this could all be some gamesmanship to put pressure on Schröder to re-sign on a more team-friendly deal. But regardless, we know that the Lakers are looking for lead ball-handlers and are cognizant of some creative methods of getting them.