The Oklahoma Turnpike Authority (OTA) has spent the last year embroiled in several lawsuits, with plaintiffs alleging its plans for an imminent turnpike expansion project not only lacked transparency, but were illegal.

This article was written by Asia Mieleszko and originally published by Strong Towns.

On December 1, 2022, over 150 plaintiffs celebrated their first legal victory as Cleveland County Judge Timothy Olsen agreed, ruling that the OTA “willfully” misled the public. “Trying to deny the public’s right to knowledge is not what a state agency should be doing [and] if they [were] transparent to begin with, we wouldn’t be having these lawsuits,” said Norman Ward 5 councilman Rarchar Tortorello, also a plaintiff in that lawsuit.

The project, according to OTA press materials, is a “$5 billion, 15-year long-range plan [which] identifies and addresses on-going highway infrastructure needs to improve access to communities across the Oklahoma turnpike network.” Named ACCESS Oklahoma, the plan involves widening four existing turnpikes, installing several new alignments, and constructing new access points for those alignments. Aspects of the project require expropriating businesses, homes, and farmland through eminent domain affecting five Oklahoma counties. Many of the plaintiffs across the various lawsuits are personally impacted, fearing displacement if the project is able to progress as planned. Furthermore, they claimed they should’ve been adequately notified of the project’s scope in advance of its announcement.

“Absolute shock and horror,” is how Norman resident Darla LeBlanc described her reaction upon learning of the news in a segment for KOCO News 5. “My family is just stuck in this nightmare limbo for the unforeseen future where OTA has removed any power or choice or autonomy on decisions for what we wanted to do for our own lives.” It was on these grounds that over 150 plaintiffs took the OTA to court.

The OTA meets routinely in the Oklahoma Department of Transportation’s (ODOT) Commission Room. Even though these meetings are open to the public, most of them orbit the minutiae, jargon, and finances that seem reserved for professionals.

On December 7, 2021, Tim Gatz, who holds both the titles of secretary of transportation and executive director of the OTA, teased a project that would “become the blueprint for the future of OTA projects and the continued economic growth and development of the state.” The accompanying press release offered little beyond an air of excitement, explicit support from Governor Kevin Stitt, and a commitment to transparency throughout a project whose scope was seemingly still being worked out. At that point, the project had no publicized name or route.

Well into the new year, on February 22, 2022, Gatz took the microphone again. According to the minutes, he thanked the Board of the OTA for their support and approval of the engineering, right of way, and utility management contracts earlier in the meeting. This documentation laid the foundation for the project he teased nearly three months prior, now titled: Advancing and Connecting Communities and Economies Safely Statewide, or ACCESS.

On February 22, the residents of Oklahoma, Cleveland, McClain, Osage, and Tulsa counties were formally, for the first time, introduced to the details of a $5 billion, 15-year turnpike expansion project whose trajectory seemed inevitable and whose route would devastate hundreds of homes, businesses, and natural areas. The agenda published prior to this meeting did not so much as hint at the scope of what Gatz announced, as determined by Judge Olsen’s recent ruling. While the verbal announcement joined a library of online materials, namely a project-specific website where constituents could track developments—www.AccessOklahoma.com—it was not preceded by any sort of public outreach.

Long-time residents, such as lawyer Stan Ward, learned their house was directly in the path of the proposed turnpike not through any personal notification courtesy of the OTA or ODOT, but through a local newspaper that had published the proposed route the following day. Other residents, getting wind of the news, began overlaying OTA projections on Google Maps to determine whether their home’s integrity would be challenged. Those impacted assert that it was on this day, a day during which budgets and contracts were already approved, that the public was for the first time adequately informed of the irreversible impact ACCESS Oklahoma would have on their lives.

Residents Sue Over Lack of Transparency

Residents immediately mobilized to assert that the surprise OTA sprung on them was illegal. Oklahoma’s Open Meetings Act requires that “all meetings of public bodies (state and local boards and commissions) must be open to the public and that the public must be given advance public notice of such meetings.” Lawyer Stan Ward, familiar with the act from prior cases, added that this notice “must be written in language [so] that an ordinary person of education and intelligence can understand the nature of business to be conducted at a public meeting.”

In fact, Ward took OTA to court in May of 2022, asserting that reference to ACCESS and its impacts was entirely absent from the principle decision-making agendas. On December 1 of that year, Judge Timothy Olsen of the Cleveland County Courthouse agreed. In the resulting summary judgment, Olsen ruled that the OTA “willfully violated” the state’s Open Meetings Act, a decision supported by troubling evidence that emerged throughout the legal process.

That evidence included an email exchange between an ODOT email address and Jones PR, a public relations contractor for the agency, dated as early as February 7, weeks before the announcement. In the exchange, a representative from ODOT requested that Jones PR purchase domains expressing opposition to ACCESS Oklahoma for a total of $412.80, including variations on their extensions: “.com,” “.info,” “.org,” and so on. 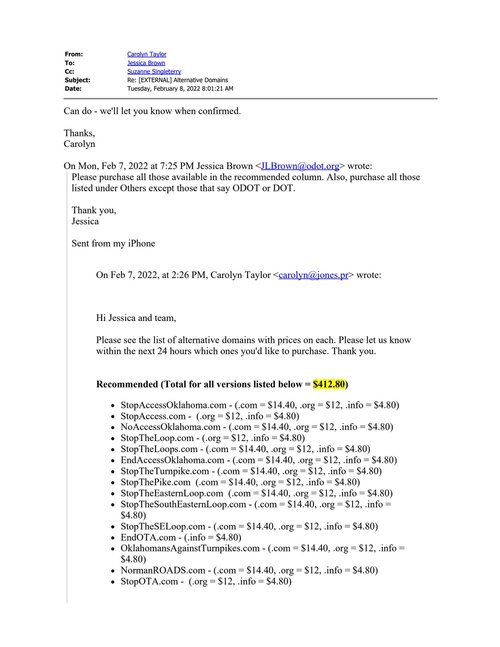 “It is common practice and the industry standard for an entity to purchase multiple domain names to help ensure the public has access to accurate information, to bar phishing sites with very similar domain names, and to protect against user error,” claimed Bryce Boyer, a public information officer at ODOT in an email to the Oklahoma Transcript.

By contrast, in a piece for NPR’s StateImpact Oklahoma, public relations expert and Oklahoma University professor, Jenson Moore, stated that, “purchasing domain names where oppositional information can readily be shared is denying the public access to alternative viewpoints that would allow them to be informed. It is not about disinformation—it’s about denying oppositional information. From a public relations standpoint, this is unethical of the OTA to do because they are purposely attempting to limit any information [that the public needs] to make decisions about this project.”

Ward and his co-counsel similarly could not be convinced that the appropriation of state funds to purchase—and consequently restrict access to—domain names exclusively expressing opposition to ACCESS Oklahoma could be interpreted as anything other than a secretive and deliberate attempt to curb dissent in advance of the February 22 rollout.

Despite this attempt, residents mobilized under the name Pike Off OTA, “a grassroots 501c4 organization that formed not only to prevent the development of two proposed turnpikes, the East-West Corridor and the South Extension, but to also reduce the overreaching impact of the Oklahoma Transportation Authority.” Dr. Amy Cerato, a professor in The School of Civil Engineering and Environmental Science at the University of Oklahoma who moonlights as a lead organizer for Pike Off OTA, insists that opposition to the turnpike is not opposition to economic development. In fact, she notes that, “the way to make a place vibrant and wealthy is to create a place for people to go, to walk to, to get out of their cars, not an 80 mph turnpike that takes people past your town and into another city.”

She’s likewise skeptical of the justifications OTA and ODOT have provided for the expansion, pointing out that nearly all of them have been debunked. Traffic data Cerato plotted throughout the last three years, as well as observable trends in the last three decades, contest the projections advanced by OTA. She remarked that these numbers recall a similar project advanced—and abandoned—in the 1990s, which foretold that 2020 would experience twice the ridership, population, and congestion than what proved to be the case. Another justification is safety, to which Cerato says, “Safety is most threatened along the interchanges, which ODOT was interested in fixing before scrapping the idea to prioritize the turnpike,” adding that “turnpike speed limits are significantly higher than those of I-35.” So, the pretense of safety rings hollow given “higher speeds are the number one cause of serious injury and death in crashes.”

So far, one side is winning in court: Olsen’s summary judgment nullified any agreements made in the last year, effectively placing OTA and ACCESS back at square one, and another case currently in the Supreme Court challenges the legality of routing ACCESS through territory unauthorized through the Oklahoma Turnpike Enabling Act. Despite these wins, Cerato foresees the necessity for additional advocacy to cement legislative obstacles for agencies like the OTA. “Not to mention,” she adds, “nobody is safe,” referring to other communities in the periphery of this plan and future highway expansion projects who reside on authorized land.

The surreptitious negotiations that have upended the lives of everyday Oklahomans are, according to Strong Towns President Chuck Marohn, “standard practice that reform alone cannot meaningfully repair.” Chiding the current practices of public engagement as “theater,” Marohn admits, “unfortunately, when it comes to highway expansions [the decision makers] are not interested in dialogue or to discern what the best approach will be. They’ve decided on their approach, and are simply looking to navigate the bureaucracy so that they can get their project built. As a result, there’s an endless amount of procedural injustices done to maintain this machine.” After discovering state funds were appropriated to purchase oppositional domains, impacted residents agreed. In an interview for Strong Towns, Stan Ward questioned, “How in the world would you have any confidence in the integrity of their actions from start to finish?”