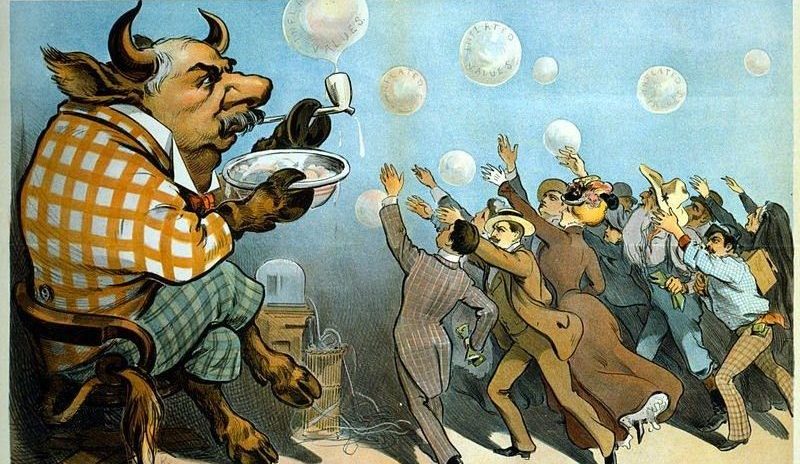 Growth names are stumbling, bitcoin is crabbing, former market leaders are getting downgraded, and inflation is heating up. Some observers see shades of the spring of 2000 or the summer of 2008 in this. More on that below, but first a quick follow up on Slope of Hope founder Tim Knight’s prediction about the weekend drop in Doge extending to stocks.

This article was originally published by Portfolio Armor.com.

In our previous post (In Case Elon Musk’s SNL Effect Extends To Stocks), we included this prediction tweet from Tim Knight:

We included this video using our app to find optimal hedges on Tesla (TSLA) in light of Tim’s prediction.

As it happened, Tesla was down another 6.44% on Monday on a red day overall for the markets. At the same time, as Sentiment Trader pointed out, 44% of S&P 500 stocks made new 52-week highs.

Good warning there about the need for humility. With that in mind, let’s consider a couple of inauspicious possible analogs.

A pseudonymous observer highlighted the recent spike in gas prices, reminding us how they helped trigger the global financial crisis in 2008.

Recall that the mortgage bubble in 2008 led to a lot of home construction in exurbs like Palmdale in Southern California, places that became less economical as gas prices spiked.

Meanwhile, TD Ameritrade’s Oliver Renick saw parallels to the burst of the dot-com bubble in the spring of 2000.

Readers may recall that we’ve analogized the current crypto bubble to the dot-com bubble before. In a post on Linked In of all places (really, Oliver?), Renick suggested that if bitcoin doesn’t stop crabbing and start rallying on inflation news now, it could sell off, tanking the whole crypto sector.

Bitcoin has utility in its role as a censorship-resistant means of money transfer, but many cryptos can accomplish this goal. It’s the gold story that’s been the secret to its success. “Digital gold” is the easiest catchphrase to remember, repeat, and fits with the financial narrative du jour of the money-printing generation. But most importantly, it’s been the most successful story because it’s been impossible to disprove – up until now.

This is the moment everyone’s been waiting for. The Fed literally doesn’t give a damn about inflation, policymakers are dumping everything into the economy they can possibly come up with, and the most reliable stocks of the bull market are breaking down. We just had the biggest bond selloff in history a few months ago and the dollar is in a month-long freefall. Bitcoiners have never been more convinced that destiny is manifest, and many believe crypto canon calls for an extension of gains after last year’s block “halving.” Gold is finally rallying, but bitcoin’s hit a wall.

If it sells off here, the entire story falls apart.

If crypto does collapse, what happens to stocks? In a post earlier this year (How The Next Crash Happens), we speculated that if there were widespread adoption of bitcoin on the balance sheets of companies before a bitcoin crash, that crash could spread to equities. Since then, though, prominent companies with bitcoin on their balance sheets, Tesla and Square (SQ), have already tumbled, as have crypto-related names such as Riot Blockchain (RIOT), Silvergate Capital (SI), and Microstrategy (MSTR).

For that matter, so have green energy growth stocks such as Plug Power (PLUG) and FuelCell Energy (FCEL).

Our friends at Squeeze Metrics agreed with our speculation that crypto has siphoned off some of the speculative fervor that had previously fueled those stocks.

If that’s the case, it may moderate the impact of a crypto bust on stocks. The prudent course of action, though, would be to assume the worst and act to avoid it.

We like to think of things “from the viewpoint of calamity,” to re-borrow the expression Benjamin Graham borrowed from the rationalist philosopher Baruch Spinoza. In the event we are heading toward a bust along the lines of 2000 or 2008, investors ought to consider hedging against market risk here. We laid out a simple approach in a post earlier this year (Shields Up). It’s a bit more expensive to hedge market risk using SPY now, but you ought to consider doing so nonetheless.