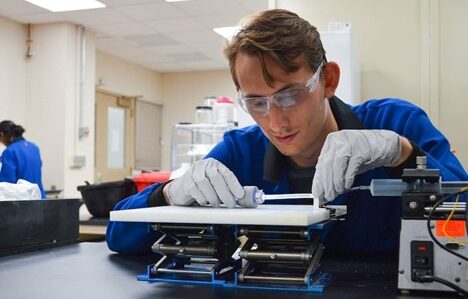 A team of scientists and engineers at the University of Minnesota has developed a plant-inspired extrusion process that enables synthetic material growth, which could enable soft robots to grow like plants. The method is innovative and new, and the resulting robots could navigate tight places, complicated terrain, and even areas within the human body.

This article was written by Alex McFarland and originally published by Unite.AI.

The research, which was funded by the National Science Foundation, was published in the Proceedings of the National Academy of Sciences (PNAS).

Robots That “Grow” as They Move

Chris Ellison is a lead author of the paper and a professor in the University of Minnesota Twin Cities Department of Chemical Engineering and Materials Science.

“This is the first time these concepts have been fundamentally demonstrated,” Ellison said. “Developing new ways of manufacturing are paramount for the competitiveness of our country and for bringing new products to people. On the robotic side, robots are being used more and more in dangerous, remote environments, and these are the kinds of areas where this work could have an impact.”

Soft robots are robots made of soft and pliable materials instead of rigid materials, and these new types of soft growing robots can generate new material and “grow” as they move. They could be applied to a variety of applications, and they are especially useful for navigating remote areas humans can’t access. Real-life applications could include inspections or installing underground tubes, or navigating inside the human body.

The soft growing robots that we currently have access to leave a trail of solid material behind them, and they use heat and/or pressure to transform the material into a more permanent structure. The researchers compare this to a 3D printer, which is fed solid filament to produce a shaped product. Despite this, the soft material gets difficult when the robot has to move around turns, meaning it’s hard for the robots to navigate certain obstacles.

To address this problem, the team developed a new means of extrusion. The new process involves material being pushed through an opening to create a specific shape, and it enables the robot to create its synthetic material from liquids instead of solids.

Matthew Hausladen is first author of the paper and a Ph.D. student in the University of Minnesota Twin Cities Department of Chemical Engineering and Materials Science.

“We were really inspired by how plants and fungi grow, “ Hausladen said. “We took the idea that plants and fungi add material at the end of their bodies, either at their root tips or at their new shoots, and we translated that to an engineering system.”

The researchers wanted to mimic the process of plants using water to transport the building blocks that transform into solid roots as the plant grows outward. To achieve this with synthetic material, the team relied on a technique referred to as photopolymerization, which uses light to transform liquid monomers into a solid material. The soft robot can use this technology to more easily navigate obstacles and turns without the need to drag solid material.

The team says the new process could also be applied in manufacturing, especially applications that use heat, pressure, and machinery to create and shape materials that might not be needed.

“A very important part of this project is that we have material scientists, chemical engineers, and robotic engineers all involved,” Ellison continued. “By putting all of our different expertise together, we really brought something unique to this project, and I’m confident that not one of us could have done this alone. This is a great example of how collaboration enables scientists to address really hard fundamental problems while also having a technological impact.”