Technically Speaking: If Everyone Sees It, Is It Still A Bubble? 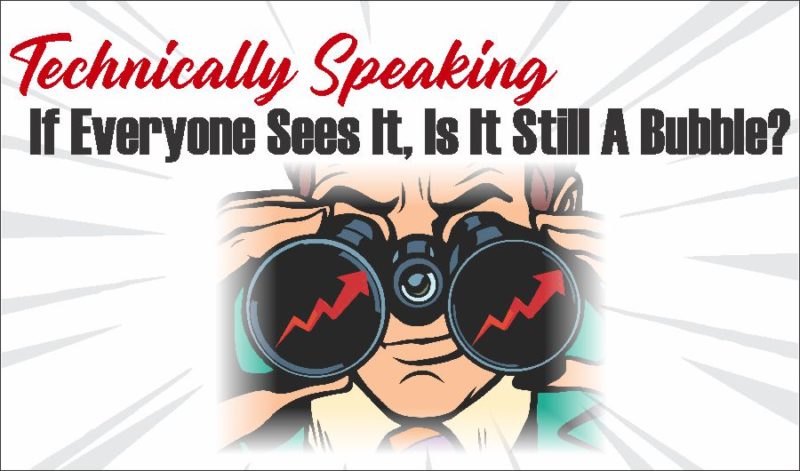 “If everyone sees it, is it still a bubble?” That was a great question I got over the weekend. As a “contrarian” investor, it is usually when “everyone” is talking about an event; it doesn’t happen.

As Mark Hulbert noted recently, “everyone” is worrying about a “bubble” in the stock market. To wit:

“To appreciate how widespread current concern about a bubble is, consider the accompanying chart of data from Google Trends. It plots the relative frequency of Google searches based on the term ‘stock market bubble.’ Notice that this frequency has recently jumped to a far-higher level than at any other point over the last five years.” What Is A Bubble?

“My confidence is rising quite rapidly that this is, in fact, becoming the fourth ‘real McCoy’ bubble of my investment career. The great bubbles can go on a long time and inflict a lot of pain, but at least I think we know now that we’re in one.” – Jeremy Grantham

What is the definition of a bubble?  According to Investopedia:

“A bubble is a market cycle that is characterized by the rapid escalation of market value, particularly in the price of assets. Typically, what creates a bubble is a surge in asset prices driven by exuberant market behavior. During a bubble, assets typically trade at a price that greatly exceeds the asset’s intrinsic value. Rather, the price does not align with the fundamentals of the asset.“ We are interested in the “third” component of “bubbles,” which is investor psychology.

A Bubble In Psychology

“It’s the swings of psychology that get people into the biggest trouble. Especially since investors’ emotions invariably swing in the wrong direction at the wrong time. When things are going well people become greedy and enthusiastic. When times are troubled, people become fearful and reticent. That’s just the wrong thing to do. It’s important to control fear and greed.”

Currently, it’s difficult for investors to become any more enthusiastic about market returns. (The RIAPro Fear/Greed Index compiles measures of equity allocation and market sentiment. The index level is not a component of the measure that runs from 0 to 100. The current reading is 99.9, which is a historical record.) Such is an interesting juxtaposition. On the one hand, there is a rising recognition of a “bubble,” but investors are unwilling to reduce “equity risk” for “fear of missing out or F.O.M.O.” Such was a point noted explicitly by Mark:

“Rather than responding by taking some chips off the table, however, many began freely admitting a bubble formed. They no longer tried to justify higher prices on fundamentals. Rather, they justified it instead in terms of the market’s momentum. Prices should keep going up as FOMO seduces more investors to jump on the bandwagon.”

In other words, investors have fully adopted the “Greater Fool Theory.”

I know. The discussion of “valuations” is an old-fashioned idea relegated to investors of an older era. Such was evident in the pushback on Charlie Munger’s comments about Bitcoin recently:

“While Munger has never been a bitcoin advocate, his dislike crystalized into something close to hatred. Looking back over the past 52 weeks, the reason for Munger’s anger becomes apparent with Berkshire rising only 50.5% against bitcoin’s more than 500% gain.” – Coindesk

In 1999, when Buffett spoke out against “Dot.com” stocks, he got dismissed with a similar ire of “investing with Warren Buffett is like driving ‘Dad’s old Pontiac.’”

Today, young investors are not interested in the “pearls of wisdom” from experienced investors. Today, they are “out of touch,” with the market’s “new reality.”

“The big benefit of TikTok is it allows users to dole out and obtain information in short, easily digestible video bites, also called TikToks. And that can make unfamiliar, complex topics, such as personal finance and investing, more palatable to a younger audience.

That advice runs the gamut, from general information about home buying or retirement savings to specific stock picks and investment ideas. Rob Shields, a 22-year-old, self-taught options trader who has more than 163,000 followers on TikTok, posts TikToks under the username stock_genius on topics such as popular stocks to watch, how to find good stocks, and basic trading strategies.” – WSJ:

Of course, the problem with information doled out by 22-year olds is they were 10-year olds during the last “bear market.” Given the lack of experience of investing during such a market, as opposed to Warren Buffett who has survived several, is the eventual destruction of capital.

“There is no shortage of current analogies, of course. Take Dogecoin, created as a joke with no fundamental value. As a recent Wall Street Journal article outlined, the Dogecoin ‘serves no purpose and, unlike Bitcoin, faces no limit on the number of coins that exist.’

Yet investors flock to it, for no other apparent reason than its sharp rise. Billy Markus, the co-creator of dogecoin, said to the Wall Street Journal, ‘This is absurd. I haven’t seen anything like it. It’s one of those things that once it starts going up, it might keep going up.’” – Mark Hulbert

That exuberance shows up with professionals as well. As of the end of April, the National Association Of Investment Managers asset allocation was 103%. “Regardless of the investment acumen of any group (we think it is very high among NAAIM members), once the collective investment opinion or posture becomes too one-sided, it can be an indication that some market action may be necessary to correct such consensus.“

Of course, margin debt, which is the epitome of “speculative appetite,” soared in recent months. As stated, “bubbles are about psychology,” which the annual rate of change of leverage shows. Another form of leverage that doesn’t show up in margin debt is ETF’s structured to multiply market returns. These funds have seen record inflows in recent months. With margin debt reaching levels not seen since the peak of the last cyclical bull market cycle, it should raise some concerns about sustainability. It is NOT the level of leverage that is the problem as leverage increases buying power as markets are rising. The unwinding of this leverage is critically dangerous in the market as the acceleration of “margin calls” leads to a vicious downward spiral.

Importantly, this chart does not mean that a massive market correction is imminent. It does suggest that leverage, and speculative risk-taking, are likely much further advanced than currently recognized.

Prices are ultimately affected by physics. Moving averages, trend lines, etc., all exert a gravitational pull on prices in both the short and long term. Like a rubber band, when prices get stretched too far in one direction, they have always eventually “reverted to the mean” in the most brutal of manners.

During the last 120-years, overvaluation and extreme deviations NEVER got resolved by markets going sideways. The only missing ingredient for such a correction currently is simply a catalyst to put “fear” into an overly complacent marketplace. Anything from economic disruption, a credit-related crisis, or an unexpected exogenous shock could start the “panic for the exits.”

There is more than adequate evidence a “bubble” exists in markets once again. However, as Mark noted in his commentary:

‘I have no idea whether the stock market is actually forming a bubble that’s about to break. But I do know that many bulls are fooling themselves when they think a bubble can’t happen when there is such widespread concern. In fact, one of the distinguishing characteristics of a bubble is just that.”

However, he concludes with the most important statement:

“It’s important for all of us to be aware of this bubble psychology, but especially if you’re a retiree or a near-retiree. That’s because, in that case, your investment horizon is far shorter than for those who are younger. Therefore, you are less able to recover from the deflation of a market bubble.”

Millennials are quick to dismiss the “Boomers” in the financial markets today for “not getting it.”

No, we get it. We have just been around long enough to know how these things eventually end.