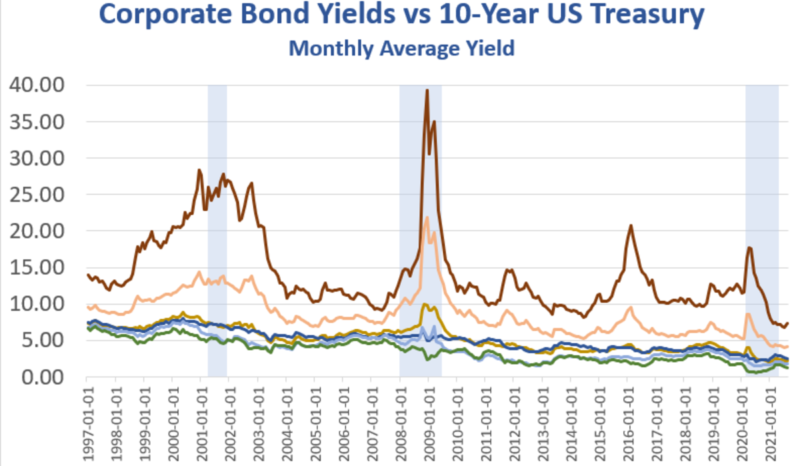 Corporate bond yields are at or near record lows as investors plow into CCC and even unrated debt. Will record optimism be rewarded?

We are at or near the record lows across the most speculative indices.

Spreads however are a bit misleading because they mask absolute yields.

But not even that nearly 6% yield save BBB bonds in housing bubble bust.

Index quality and duration are also factors. Some suggest the quality of junk is better now than then. The WSJ comments “54% of bonds in the ICE BofA U.S. high-yield index carry an average double-B credit rating, the highest ratings tier below investment grade. That is up from 47% two years ago and 38% in 2008, just before the financial crisis.”

Ford has $152 billion in total debt. That debt is just one notch below investment grade.

But will Ford survive?

Faced with yields once reserved for the safest types of government debt, some managers of speculative-grade bond funds are piling into debt with rock-bottom credit ratings. Others are buying smaller, more obscure securities that carry higher yields because they can be hard to sell.

The average speculative-grade U.S. corporate bond yield reached as low as 3.53% this summer, more than a percentage point lower than it had reached at any time before the Covid-19 pandemic, according to Bloomberg Barclays data stretching back to 1995.

For much of the year, many have been piling into the lowest-rated speculative-grade bonds—those rated triple-C or lower. This buying spree has driven yields down so far that purchasers have rarely been compensated less for taking risk.

Marc Bushallow, a portfolio manager at Manning & Napier Inc., based in the Rochester, N.Y., area, is among those adopting a different strategy. Since last fall, the firm’s seven-person fixed-income team has been pursuing smaller, less frequently traded corporate bonds that are often unrated by the three major ratings firms.

“There are times in the market when you want to own less-liquid stuff, and there are times when you don’t,” he said. “It’s relatively early in the [economic] cycle, so unless you think the cycle is going to end in 12 to 18 months, we think that it is still a pretty attractive place to be.”

I am amused by the comment that it’s “relatively early in the cycle”. Early or late, yields are at or near record lows.

GDP estimates are falling like a rock and everything is priced for perfection.

Even if there is no recession on the horizon, junk bond yields can rise for all kinds of reasons, one of them being a simple attitude change over what constitutes reasonable risk.