The Crispy Chicken Sandwich Wars Are Heating Up 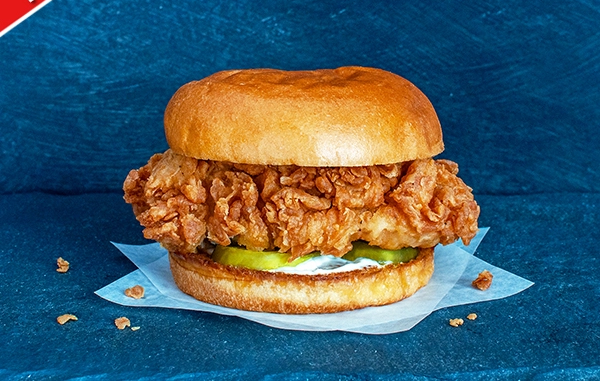 Just yesterday we wrote about Impossible Foods slashing its wholesale prices for the second time in a year in an attempt to get the prices of its patties closer to parity with beef prices.

Given the number of Americans who are vegetarian is so low—just 5% according to a 2018 Gallup poll, quick service restaurants have more important menu items to compete over than alternatives to meat.

This article was written by MarketCrumbs.com.

While the crispy chicken sandwich has been around for a long time, the food item has gained popularity since Popeyes launched its version in August 2019.

McDonald’s announced on Monday that its new Crispy Chicken Sandwich, featuring the sandwich’s signature pickle, will be available at participating restaurants nationwide on February 24. McDonald’s is introducing three versions of the sandwich—Crispy, Spicy and Deluxe, which includes lettuce, Roma tomatoes and mayo.

With the addition of the Crispy Chicken Sandwich, McDonald’s is sticking to a promise it made to investors last year when it told them it would release a sandwich as franchisees voiced their concerns over offerings from Popeye’s and Chick-fil-A threatening their sales. McDonald’s teased the sandwich in December 2019 as it was testing it in Houston and Knoxville, but delayed its release last year amid the pandemic.

KFC announced yesterday it too would join the crispy chicken sandwich wars with the debut of its KFC Chicken Sandwich, which will be available at all 4,000 KFC restaurants in the U.S. by the end of February. Saying “Fried chicken fans have never tasted a sandwich like this before,” KFC’s version has all the traditional ingredients plus real mayo or spicy sauce.

KFC touted the amount of detail it went into to create what one customer during the test run in Orlando called “a life changer.” The KFC food innovation team tested pickles with eight variations of thickness and teamed up with six different bakeries on more than ten recipes to find the perfect bun.

“We tested the new KFC Chicken Sandwich in Orlando last spring, and we nearly doubled our sales expectations, so we knew that we had a winner,” KFC U.S. Chief Marketing Officer Andrea Zahumensky said. “Many customers hadn’t considered KFC as a part of the chicken sandwich conversation, but anyone who tastes this sandwich will know, without a doubt, that we’re playing to win.”

Besides offering a sandwich that many find delicious, quick service restaurants are rushing into the category for one reason, as best explained by McDonald’s USA President Joe Erlinger in November.

“Globally, the chicken category is almost twice the size of beef,” Erlinger said. “It is growing faster and represents a significant opportunity.”