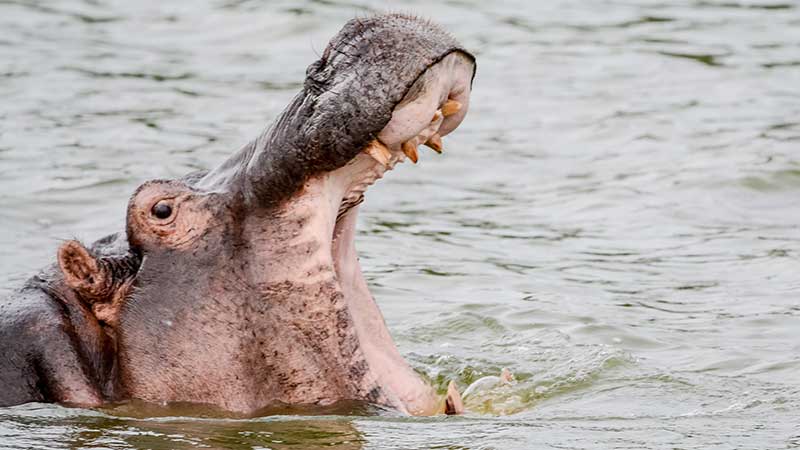 They have two adorable ears, two beady eyes, a comically rotund belly, a gaping mouth, and they are extremely dangerous. The hippopotamus, or “river horse” as they are known in their native Africa, kill far more people annually than cheetahs and lions. It is estimated that hippos are directly responsible for more than 500 human deaths every year, ranking them as one of the world’s deadliest animals.

A favorite of cartoonists, the hippo is usually depicted as being jolly and clown-like. Nothing could be further from the truth. Hippos are fiercely territorial, and will charge and kill any human or animal they deem an invasive threat.

The hippos’ substantial weight places them as the world’s third largest mammal, following elephants and rhinoceroses. Unwary humans who see them glide in nearby rivers incorrectly assume the hippos as docile, and sometimes climb on their backs as they would when mounting a stallion. The unamused hippo will then discharge the unwanted rider and drag them underwater to drown. Hippos also have very sharp teeth lining their substantial mouths, and are known to frequently maul their prey.

An especially horrifying hippo attack occurred at the Zambezi River in Zimbabwe in 1996. A tour guide was leading a kayak expedition when his party was overpowered, and he found himself being swallowed whole by one of the creatures. “I seemed to be trapped in something slimy. There was a terrible, sulphurous smell, like rotten eggs, and a tremendous pressure against my chest.” While he was able to escape, the brush with death cost the guide his left arm.

Hippos have proved to be problematic in the South American nation of Colombia. Notorious drug dealer Pablo Escobar, during his reign in the 1990’s, imported four hippos to his private compound in Villa Napoles. When Escobar’s narcotics empire collapsed following his death, the animals in his collection were relocated to zoos. The one exception were the hippos, who were allowed to roam free in the countryside. It was here the animals began to reproduce at an alarming rate, thriving in the lush jungle landscape without natural predators.

Researchers say that there are more than 80 hippos in the area. Some scientists suggest that the animals are a boon to the ecosystem, as they subsist on the local flora and fauna, and then enrich the surrounding soil with their dung. Other researchers argue that the hippo’s dung poses a threat to aquatic life in the area, as it robs local waterways of oxygen needed for local fish. Most agree, however that the situation gives the nearly extinct species a safe habitat to live and reproduce.

To date, there have been no known attacks on humans in the area. People frequently spot the hippos wandering free in the area, remarking that the creature is a more common sight than the local wildlife. While giving the hippos the affectionate nickname of “village pets,” Villa Napoles natives know well enough to give the two-ton creatures a wide berth.