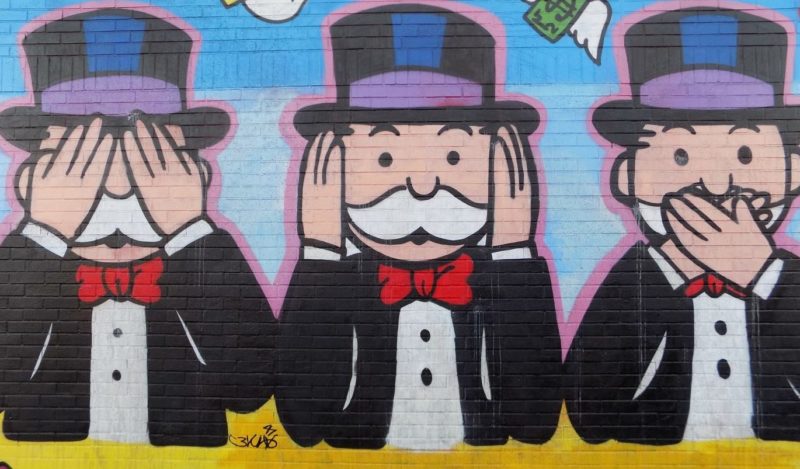 “I’m not in the transitory-inflation crowd. The private sector is allocating all the money to the fast-growing software, eating-the-world companies. It’s not allocating money to companies that actually make things and provide other kinds of services that people find less exciting, meaning there are shortages of these things now.”

This article was originally published by The Swarm Blog.

In fact, after two decades of a downturn in economic activity, it is possible to argue that low interest rates policy has been a failed experiment.

There is no free lunch in economics, meaning that every decision taken by authorities has consequences, even when it comes to supplying cheap money. I have already discussed the negative externalities due to lose monetary policies and infinite bailouts, such as a growing squeeze of working and middle classes (see There Ain’t No Such Thing as a Free Lunch – Part 1), and capital misallocation (see Part 2).

Those policies are based on the idea that low rates will favor investment decisions and fuel a powerful economic boom, which is a fallacy. Of course, authorities may provide temporary forms of relief when a crisis occurs in order to stabilize the system and to avoid a spiral of defaults. However, such measures should not become the new paradigm, as capitalism is based on the relationship between risk and return. Said differently, interest rates need to be high enough so as to incite wealthy agents to invest in new projects, looking for high returns on equity, and so that they can repeat that again and again on the long run.

Besides, the economy evolves towards a form of punctuated equilibrium, which means that crises should not be treated as “accidents” but rather as structural and necessary events. In other words, the objective of any serious political or monetary authority should not be to avoid downturns at any cost, but to fight distortions and to ensure stability.

Today, we live in countries where what matters the most is to make quick and significant capital gains. People are no longer investing in projects, they are just gambling on markets, willing to be part of the next major vertical move. This means buying stocks of young technology companies with absolutely no balance sheet and selling a vague promise of a killer product, or panic-buying shares of zombie firms with absolutely no future prospect, and let’s not even talk about NFTs.

Even if some people argue that we have entered the so-called “exponential age” where only digital activities would matter, manufacturing remains the lifeblood of an economy. According to Czech-Canadian thinker Vaclav Smil, there is no innovation and no sustainable growth perspectives without a healthy manufacturing sector [1]. And this can only occur in an environment characterized by normalized interest rates.

The economy can survive to higher rates. On the long run, it even needs them. The thing is, everyone is afraid of the consequences of such a move.

Indeed, the corollary of that idea is the necessity for Western countries to solve their debt problem. As long as the debt situation worsens, the economy will continue to evolve towards an ultra-speculative machine that will destroy any serious prospect of creating long-term tangible assets, jeopardizing America and Europe’s chances for the future. Like it or not, but China has taken a reformist turn since 2015.

Unfortunately, I deem such a change very unlikely. First, too many people are being fooled by soaring asset prices. Even in the financial industry, people are convinced that bull runs reflect the fact that the economy is doing well. You would be surprised to find out how many people really believe in the efficient markets hypothesis. Meanwhile, every folk who tries to alert on risks is mocked and called “Cassandra.” Some persons even had the privilege of receiving a visit from the SEC just because of that, as if spreading bearish opinions was a federal crime in some democracies.

The second problem is the fact that a worrying number of political leaders are too corrupt to do anything about that. Beyond the case of Fed presidents trading stocks or municipals bonds, everyone should bear in mind that the speaker of the House has been making millions thanks to call options trades. If the people in charge of changing the rules are influenced by market prices, then who is going to push for serious reforms?

Last but not least, central banks are trapped as they opened a Pandora’s box in 2020 by adding too much risk to their balance sheet. Indeed, a growing share of the value of major currencies like the dollar or the euro is now backed by risky assets such as corporate bonds (including high yield ETFs). Therefore, the Fed and the ECB must ensure that the market price of those securities never fall, in order to guarantee the value of their currencies. Otherwise, that would mean losing control over the currency. But as capital markets are now conditioned to infinite QE policy, central banks have no choice but to keep expanding their balance sheet to support the value of those assets, meaning that they are forced to buy even more risky things (Janet Yellen once suggested that the Fed should buy stocks), leading to a problematic vicious circle.

Nevertheless, at some point, we will have no choice but to change direction, wishing that this be done with discipline and without malice. Of course, one should expect a significant crisis, given that speculative excesses will not be absorbed smoothly. But everything comes with a price, and the economy really needs higher rates.

If we do not initiate change on our own, then sooner or later our countries will be impacted by even more dramatic events. As Jonathan Tepper conjectured [2], “risk is like energy and cannot be destroyed, it can only be transformed.”