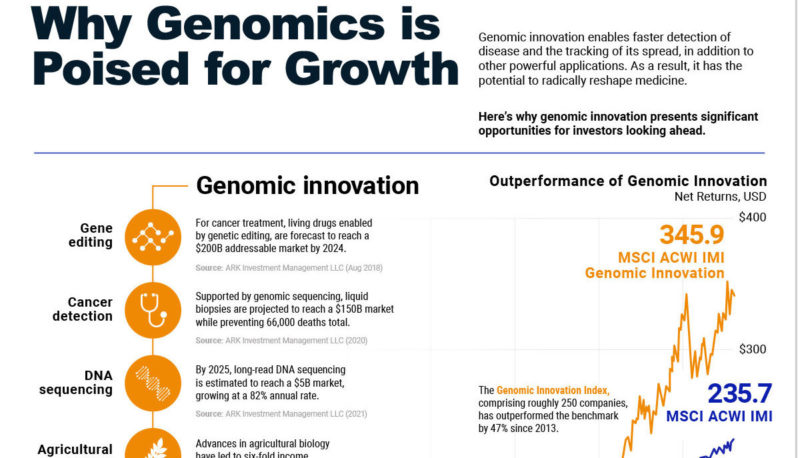 The Genomic Revolution: Why Investors Are Paying Attention

At the center of the genomic revolution is big data and DNA.

The implications are vast. With recent advancements, faster cancer detection is within reach, potentially saving thousands of lives each year. An initial research study shows this technology could save 66,000 live annually in the U.S. alone.

This article was written by MSCI and the Visual Capitalist, and originally published there.

In this graphic from MSCI, we look at four reasons why the genomics sector is positioned for growth thanks to powerful applications in medicine.

What is the Genomic Revolution?

To start, the genomic revolution focuses on the study of the human genome, a human (or organism’s) complete set of DNA.

A human consists of 23 pairs of chromosomes and 24,000 genes. Taken together, the human genetic code equals three billion DNA letters. Since most ailments have a link to our genetic condition, genomics involves the editing, mapping, and function of a genome.

With genomic innovation, large-scale applications of diagnostics and decision-making tools are made possible for a wide range of diseases.

Over the last century, the field of genomics has advanced faster than any other life sciences discipline.

The hallmark achievement is the Human Genome Project completed in 2001. Since then, scientists have analyzed thousands of people’s genes to identify the cause of heart disease, cancer, and other fatal afflictions.

Here are four areas where genomic innovation is making a big difference in the medical field.

For instance, gene editing enables living drugs. As the name suggests, living drugs are made from living organisms that harness a body’s immune system or other bodily process, and uses them to fight disease.

Based on analysis from ARK Invest, living drugs have a potential $200 billion addressable market.

Multi-cancer screening, supported by genomic sequencing and liquid biopsies, is projected to prevent more deaths from cancer than any other medical innovation.

Through a single blood test, multiple types of cancer can be detected early through synthetic biology advancements. Scientists use genomic sequencing (also referred to as DNA sequencing) to identify the genetic makeup of an organism, or a change in a gene which may lead to cancer.

Critically, screening costs are dropping rapidly, from $30,000 in 2015 to $1,500 in 2021. The combination of these factors is spurring a potential $150 billion market. This could be revolutionary for healthcare by shifting from a treatment-based model to a more preventative one in the future.

For these reasons, long-read DNA sequencing is projected to grow to a $5 billion market, growing at a 82% annual rate.

Finally, the genomic revolution is making strides in agricultural biology. Here, research is looking at how to reduce the cost of producing crops, improving plant breeding, and enhancing quality.

One study shows that genomic advances in agriculture have led to six-fold increases in income for some farmers.

Investing in the Genomic Revolution

A number of genomic-focused companies have shown promising returns.

This can be illustrated by the MSCI ACWI Genomic Innovation Index, which has outperformed the benchmark by nearly 50% since 2013. The index, which was developed with ARK Invest, comprises roughly 250 companies who are working in the field of genomic innovation. In 2020 alone, the index returned over 43%.

From diagnostics to prevention, the genomic revolution is breaking ground in scalable solutions for global health. Investment opportunities are expected to follow.