The Greatest Heist In History 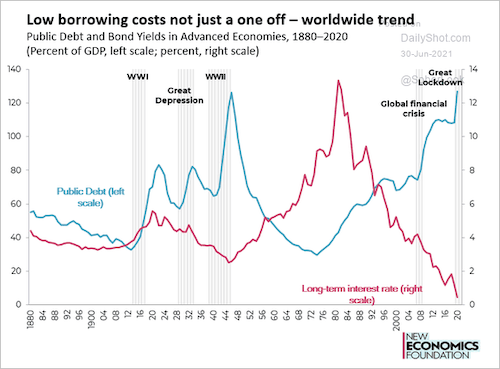 With government (as well as corporate) debts at nosebleed levels AND interest rates at by far the lowest point in the last 140 years, we’re facing a unique dilemma today…

What happens if we were to ratch interest rates up like Volcker did in 1980, when inflation raged? As we discussed in a recent issue of Insider Weekly, there are two ways out of this mess:

Cap rates and let inflation run hot. You can’t jack rates, so you don’t. You realise that the interest rate is fictional, but so what? You then get a two step economy. One with real rates (i.e. you and I borrowing money), and one for the government. That’s basically what we have today so most folks will understand it.

The other option is to wipe out the debts and start afresh. A debt jubilee. I think this is actually the more likely avenue, even though I’ve seen nobody considering it. The pointy shoes have been building the narrative for a need for a “debt reset,” even trotting out Mario Draghi a few months ago to champion the idea. In any event, this would come together with a central bank digital currency. It would provide the perfect cover and the sheeple wouldn’t have a clue as to what’s going down. It would be the greatest heist in history if they pull it off.”

The good news for you as an investor is that in both scenarios the practical thing to do is to get out of cash and own productive assets that would hedge you against inflation and loss of confidence in the currency system.

HOW TO INVEST FOR THE GREAT RESET

Chris joined George Gammon on his Rebel Capitalist podcast earlier this week to discuss the massive geopolitical and economic shifts taking place today and best places to put your capital to profit from these changes. The conversation has only been on the interwebs for a few days and it already received a flurry of positive comments (which made Chris blush).

Listen to the entire conversation here.

If you’re a long-time reader or Insider member, you know (because we keep harping on about it like a nagging wife when you’ve left your underpants lying about) we’ve been salivating at the opportunities in coal.

While we’re told from left and right that coal is a thing of the past, the Wall Street Journal reports:

“Coal prices have climbed to their highest level in a decade, making the fuel a hot commodity in a year when governments are pledging reductions in carbon emissions.

A shortfall of natural gas, rebounding electricity usage and scanty rainfall in China have lifted demand for thermal coal. Supplies have been crimped by a closed mine in Colombia, flooding in Indonesia and Australia and distorted trade flows caused by a Chinese ban on Australian coal.

Both coal-price benchmarks have outstripped gains in oil, copper and other commodity markets that are benefiting from a vaccine-fired burst of economic activity.”

Back in April, we highlighted in Insider Weekly one of the companies best positioned to profit from the rise in coal prices, Peabody Energy:

“Peabody was once the world’s biggest publicly listed coal miner. Now it has the status of a microcap. To say it is unloved is an absolute understatement. It is essentially priced for bankruptcy.

The big issue for Peabody was late last year they had debt coming due, which needed restructuring. Debt was restructured and now Peabody’s nearest debt maturity is 2024. That should be a long enough runway.

What is the essence of the call on Peabody? Well, some 84% of its product is thermal coal and some 60% is consumed in the US.

So the “call” on Peabody would be that power output from coal fired power stations in the US will increase over the next 5-10 years. And why would that be? Because natural gas becomes more expensive. And why would natural gas prices rise? Constriction of supply due to a decrease in by-product from shale oil. And supply of thermal coal from the US? Well, to keep it short, resources are being depleted way faster than they are being replaced!

If Peabody were to get back to a valuation remotely close to other US coal miners (who are cheap in the first place), then it would be at very least a doubling of Peabody’s stock price.”

That’s precisely what happened. Though, to be frank, we didn’t expect to get “lucky” so quickly. Peabody is sitting at $8.19 today — a double from when we discussed it. But as you can see in the above chart, it’s still way below its 2018 highs.

THE CASE FOR “TOXIC” SECTORS

Staying with coal for another moment…

If you are wondering why we are so bullish on “toxic” sectors such as coal, this Bloomberg article does a good job at summing up our thesis:

“The world has said we want to reduce the amount of thermal coal production, mining companies are definitely not investing in more thermal coal mines,” Glasenberg said at the Qatar Economic Forum last week. “What you are having is supply being disrupted, no new supply coming into the market. However, demand is still there.”

The key driver of demand remains Asia. Despite President Xi Jinping’s pledge to make the economy net zero by 2060, power stations are burning at full capacity this year as demand from factories strains the power system. A peak isn’t expected until 2026 and in the meantime the International Energy Agency forecasts demand will keep rising by about 0.5% a year. Consumption is expected to rise even faster in India, by an average of 3.1% a year.

Together with hefty increases in Southeast Asia, that’s more than enough to cancel out falling burn rates in Europe and the U.S. The IEA reckons the world will consume slightly more coal in 2025 than this year.

Benchmark prices in Australia have rallied about 66% this year to more than $136 a ton, the highest since 2008.

Supply won’t respond because investing in new mines has become anathema for banks and many mining companies.”

And yet, for the most part, coal stocks (along with oil and gas, shipping, uranium, etc.) remain to be seen as toxic waste by most investors. So we keep buying…

And lastly, seeing that the Biden administration just roped 130 countries into their 15% minimum corporate tax rate scheme, we thought it opportune to share with you our thoughts on the matter. Hot off the press, from this week’s Insider Weekly:

“What this global tax is, if anything, is protectionism for big businesses and large nations (now being run as technocracies) such as those in the G7. This simply benefits the already large, already rich old farts comprising the G7.

None of this does a damn thing for small and medium business, which is the lifeblood of any middle class society, and it doesn’t do a damn thing for small nations either. It effectively penalises the productive aspects of society while simultaneously paying people to sit on their arses (Covid relief/UBI) producing sweet “pha-call” and then funneling trillions into low productivity sectors (green and ESG) and creating bubbles (which we’ll participate in via our nickel, copper, and rare earths). That their previous large entitlement spending programs have been an unmitigated disaster, or that the overbearing weight of government on small and medium businesses has created structural imbalances in the economy showing itself in greater not less inequality won’t matter. These morons don’t have mirrors.

As to those large corporations who, if you’ve not been paying attention, are the ones calling the shots, they’ll be unlikely to be hard hit. Remember, taxes have been going up for the last few decades in the West. How’s that fared for the likes of Microsoft or Amazon?”

Here’s something else to ponder… What does all this mean on an international playing field? It will be terrible for any small countries that are in need of attracting capital investment. If they are forced into this collective, their economies will suffer with those aforementioned technology giants taking up much of the market share. Everyone loses but large multinational corporations get richer. Yaay!