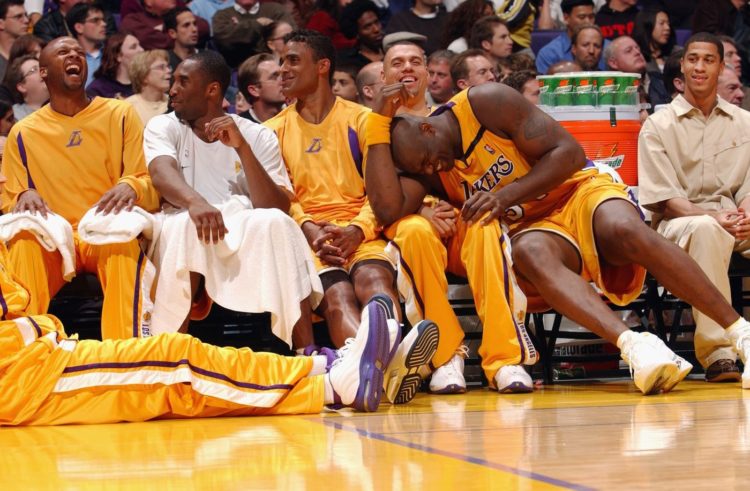 Led by the dynamic duo of Kobe Bryant & Shaquille O’Neal, the Lakers started the new millennium winning three straight NBA titles. They ended the decade in a similar fashion, claiming championships in ’09 & ’10. Between the five championships, the chemistry between Kobe & Shaq deteriorated, leading to Shaq’s departure from the team following their title in ’03. These are the players best known for helping the Lakers prove their dominance in the league for the 2000s.

PG: Derek Fisher – Not exactly a volume scorer but if you look up clutch shots in a dictionary, you’d see Derek Swisher & Robert Horry side-by-side. Also, not just anyone could play peacemaker with the inflated egos & fiery tempers of Kobe & Shaq, but Fisher did, acting as one of the team’s strongest leaders on & off the court.

SG: Kobe Bryant – Throughout the 2000s, Kobe built upon the potential that he showed in the late ‘90s and quickly established himself as one of the best guards in the league. In the playoffs through the 2000s, Kobe never dipped below 20ppg, which further cemented his legacy as an upper-echelon scorer and helped lead LA to five titles. There’s simply not enough time to fully capture everything that made Kobe in the 2000s such a beloved player by fans and such a special player to watch.

SF: Lamar Odom – If your only connection with Lamar Odom is through the Kardashians, you’re missing out on sneakily one of the best players of the decade. A starter for most of his early career, when Lamar moved to sixth man for the Lakers, he averaged 13p & 8r to help the team win the ’09 & ’10 titles. He followed those rings up with some more hardware, adding a Sixth Man of the Year award to his mantle as well. Originally acquired as a part of the trade that sent an angry Shaq to Miami, Odom endeared himself to fans with strong play on the court and his charismatic personality off-court.

PF: Pau Gasol – Since 2000, the only Laker with more points than Pau Gasol is Kobe Bryant. This stat becomes even more impressive when you remember that Pau wasn’t a Laker until 2008, where he instantly formed an incredible bond with Bryant and found rapid success. Gasol averaged 18p, 10r, & 2blks per game in the ’09 & ’10 NBA Finals and his playmaking ability from the paint & post opened up the Lakers offense and took the team to a higher level of play. Though it comes under heartbreaking circumstances following Kobe’s untimely passing, to see the bond Pau has maintained with the Bryant family shows reminds fans that it’s always bigger than basketball.

C: Shaquille O’Neal – Though Shaq was traded to the Heat in July 2004, there is no one that made a greater impact at the center for the Lakers in the decade. Named Finals MVP in all three of the team’s titles to start the decade, Shaq’s numbers across the 2001 & 2002 NBA Finals remain mind-boggling: 34p, 14r, 4a, 3blks per game. There was nothing like prime Shaq and there will never be anything like him ever again. One of the greatest what-ifs in sports remains what if he & Kobe had been able to resolve their differences and how many more rings could’ve been had but still, the two remain one of the most dominant duos the league has ever seen.

Sixth Man: Rick Fox/Robert Horry – It’s impossible to choose just one of these Lakers to bring off the bench. Fox was never a superstar outside of with Lakers fans but with timely scoring and fast hands-on defense, he was a key part of the three-peat and part of what gave LA so much talent & depth. Similarly, “Big Shot Bob” Horry may not have been the flashiest player, but no one seemed able to hit the clutch shot better than Horry. His buzzer-beating three vs. the Kings continues to be featured on highlight reels 18 years later.

For millions of Lakers fans, this was the decade that introduced them to the team and made them fans for life. One of the golden ages of the franchise, the Lakers in the 2000s will always be mentioned along with the all-time sports dynasties.