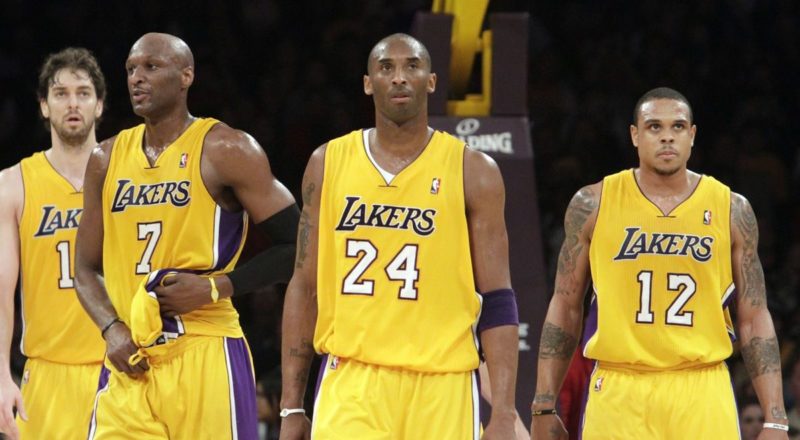 Following back-to-back championships to start the decade, millions of NBA fans expected the Lakers to remain perennial contenders for the rest of the decade. Yet, things didn’t go as expected as the team would struggle through the mid-2010s.

PG: Derek Fisher – A steady point guard can make all the difference to a team and it’s telling that the great Kobe Bryant never won a championship without Derek Fisher by his side. Fisher’s leadership, consistent play, and knack for hitting clutch shots over the years has helped him be remembered as one of the team’s best PGs.

SG: Kobe Bryant – There are no words or adjectives that can explain the greatness that was Kobe. After an Achilles’ injury prematurely ended his prime in 2013, Kobe worked to come back for a few more seasons before retiring in 2016. His tragic passing in 2020 robbed the world of a second act that had the potential to be just as iconic as his accomplishments on-court.

SF: LeBron James – The LeBron-led Lakers may have missed the playoffs his first season with the team while he sat with injuries but the next season, they reloaded by trading almost all their young players for New Orleans Pelicans’ superstar Anthony Davis. The dynamic duo survived an extended season shutdown and the NBA Bubble to claim the ’19-’20 NBA title and the 17th banner in the franchise’s history. With James showing no signs of slowing down, the sky is the limit.

PF: Lamar Odom – Lamar only spent two seasons on the Lakers this decade, but he helped bring home the 2010 championship and won Sixth Man of the Year honors the following year. A player ahead of his time, Odom’s size, playmaking ability, and strong defensive presence helped redefine what a forward could be in the modern NBA.

C: Pau Gasol – It’s probably blasphemous to say that Kobe and Pau could rival Kobe and Shaq as a dynamic duo, but Pau was a perfect fit next to Kobe. He provided the type of playmaking and floor-spacing that the Lakers needed to get their shooters open looks and his 19pt, 18r Game 7 vs. the Celtics in 2010 should be etched into marble and placed outside Staples Center for all eternity.

Sixth Man: Kyle Kuzma – It’s tough to not include Anthony Davis on this list but considering he only played about sixth months of the decade, instead, let’s give some attention and love to Kuz. One of the only holdovers from the young core of the Baby Lakers, Kuz struggled to carve out his role playing with LeBron as he was shifted back and forth from the bench to the starting lineup. From his rookie year his scoring was very polished but his development as a passer and even more so defensively, have changed fans’ perceptions of just what he can contribute on championship-caliber teams.

With LeBron and AD as the pillars, it’s hard to bet against the Lakers having another extended period of greatness throughout the 2020s. The Western Conference is only getting better but if Rob Pelinka can continue to build smart, well-rounded teams, the sky is truly the limit.