The Mustached French Waiters’ Strike Of 1907 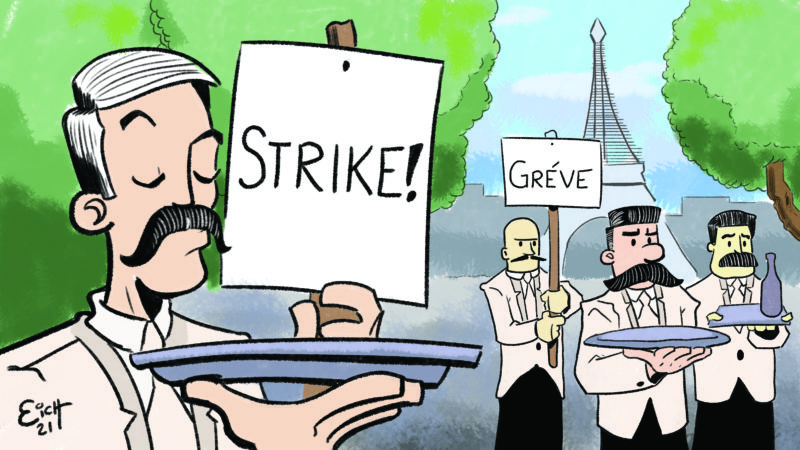 The concept of class and class stratification is something that, all things considered, isn’t very prevalent in American Society. In the past, there might have been more of an inclination for the haves to not interact with the have nots (and in affluent parts of Los Angeles that’s still the case to this day). The same could not be said of early 20th century France.

France, a country that has existed in some form since Charlemagne, has been a society that, to varying degrees, has been class orientated.

In 1907, one of the most unique workers’ strikes of all time took place within its borders – the Parisian mustached waiters strike – after in April of that year restaurant owners instituted a clean-shaven mandate.

Essentially, restaurant owners in Paris decided to institute a clean-shaven mandate, or simply, they told Parisian waiters that they needed to shave their mustaches. The rationale that restaurant owners had was that they wanted their patrons to feel like they were being served by servants, not by equals who happened to be taking their orders and bringing out their food. The allure of going to a restaurant, for the upper-class and middle-class at that time, was the feeling of being served/above people waiting on them.

Concurrently, the mustache was viewed as a symbol of masculinity, national pride, and a number of veterans and active servicemen wore mustaches as a badge of honor for serving their country. For the past one hundred years before the strike, the media and publications had built up the mustache as being something significant. Beyond that, it was seen as a fashion trend and a number of Parisian men’s wives loved the mustaches that their husbands had.

“In a time of rapid economic and social change, men grew beards or mustaches to underscore the natural virtues, and supposedly imprescriptible rights, of men. Toward the end of the nineteenth century, full beards had come into fashion in Europe and America. Meanwhile, most European armies required their officers – and sometimes enlisted men too – to wear mustaches. That turned them into a symbol of dashing masculinity that was quickly adopted by civilian men.”

In April of 1907 after the mandate had been given out, waiters and other restaurant workers decided to go on strike. They picketed restaurants, they would heckle scabs who had taken their jobs while they were striking, and as a result, the police started arresting some striking waiters.

According to Atlas Obscura:

“But the waiters also had defenders who joined them in challenging France to live up to its republican ideals. ‘These gentlemen will wear the mustache,’ wrote an observer in L’Avenir. ‘I congratulate them, and I find this conquest as fair as natural.’ For La Presse, the movement was an expression of the Declaration of the Rights of Man and Citizen and allowed the waiters ‘to finally show that they are men, free men, who have no more kings, who have no masters and who can wear at their ease this symbol of the all-powerful male, the mustache. Oh!’ the paper proclaimed, ‘the beautiful independence!’ The cause had even risen to Parliament, where Antide Boyer, the Socialist Deputy from Marseilles, proposed a bill making mustache bans illegal, on pain of up to three months’ imprisonment.”

Eventually, the men striking for the right to have a mustache won out, and the restaurant owners caved to their demands. Some socialists at the time complained that waiters should have fought harder and longer in order to achieve greater demands, but this strike wasn’t about socialism or capitalism; it was about the little guy getting trampled by those in power and how they fought back and won.

This strike, all things considered, wasn’t very significant in the grand scale of political events that took place in the early 20th century, but what is more significant is what caused the strike to happen.