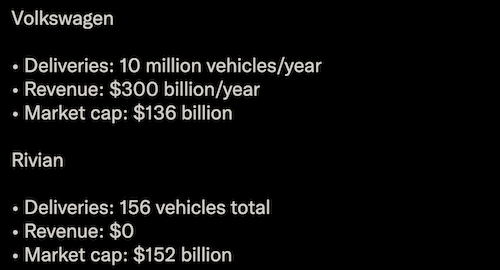 Last week we highlighted a SPAC merger deal involving an electric vehicle startup and a lingerie maker as a sign of how out of whack the market is right now.

Well, this week we bring you another head scratcher: Rivian, a high-flying EV company pimped as the next Tesla.

After the IPO earlier this week, Rivian sports a market cap of $146 billion, which makes it bigger than Starbucks and American Express. At the same time, The Houston Chronicle reports the company so far “delivered about 150 electric pickup trucks mostly to employees.”

MORE OIL? NOT SO FAST…

Now that the oil price has bolted higher, will production for fossil fuels be ramping higher also?

Well, as we highlighted in our most recent issue of Insider Weekly, “this time it is indeed somewhat different.“

Ten years ago, the “cost of capital” for developing oil and gas as compared to renewable projects was pretty much the same, falling consistently between 8% and 10%. But not anymore.

The threshold of projected return that can financially justify a new oil project is now at 20% for long-cycle developments, while for renewables it’s dropped to somewhere between 3% and 5%, according to Michele Della Vigna, a London-based analyst at Goldman Sachs Group Inc.

“That’s an extraordinary divergence which is leading to an unprecedented shift in capital allocation,” Della Vigna said. “This year will mark the first time in history that renewable power will be the largest area of energy investment.”

And you wonder why we are thinking that $150 a barrel of oil will prove to be a little on the conservative side?

DOUBLING DOWN ON INSANITY

The above appears to be completely lost on the pointy shoes who are hellbent on engineering a full-blown energy crisis.

It was put to Granholm that domestic oil production in the U.S. had abated over the last couple of years, even prior to Covid, due to a lack of investment incentives.

“I don’t know why at $80 a barrel those incentives are not there,” she said. “During Covid, it was down – they backed off because demand was not there because people were staying home, we know that. Now that things are back up, the production should be meeting that [demand], there has been rigs that have been added but not fully,” she added.

“The bottom line is, this is… exactly why we should be, as a globe, focusing on getting our resources from the sun, from the wind, from the technology that we’ve developed in electric vehicles, etcetera.”

“A lot of that though, again, is based upon geopolitical adversaries or competitors — however you want to describe it — that may be manipulating prices. And do you want to be subject to that long term? No.”

Do they seriously believe getting your energy from the sun and wind will give you energy security? Good luck on that one!

We’re not complaining because the more that they go down this renewable rabbit hole the greater the resulting energy crisis… and we’ll be there waiting with a big bone in our mouth.

In February 2020, we started warning that lockdowns will bring about inflation and shortages. This pesky stuff is now part of our daily lives. We recently set up a dedicated inflation channel in our Insider private forum, where members can share their own experiences with all things “transitory”.

Member Richard shared this “gem”. According to new research, it’s you and us — the idiotic consumers — that are causing inflation.

We need a stiff drink!