The Strange Disappearance Of Glen And Bessie Hyde 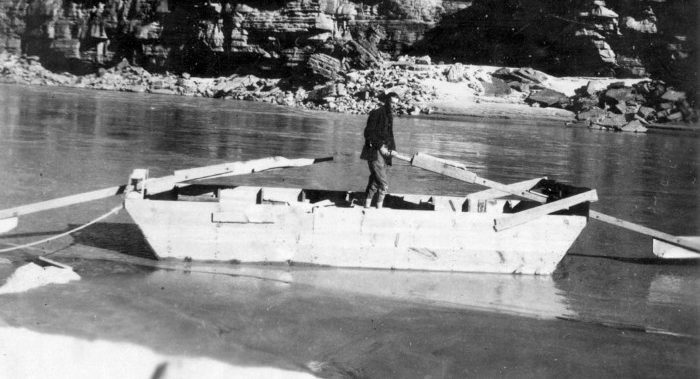 Most people expect their honeymoon to be a happy, momentous occasion filled with warm memories. Few expect to set out and never return again.

On November 18, 1928, when Glen and Bessie Hyde said goodbye to brothers Ellsworth and Emery Kolb, they set out to begin walking down a path leading to the Colorado River. There, the Hydes had a boat tied up and they planned to spend the following weeks floating down the rapids in the Colorado and Green rivers for their extended honeymoon that they had begun the previous October.

This article was written by Renee Rose.

In an eerie foreshadowing of the events that would follow, Emery Kolb’s young daughter appeared just before the Hydes were out of the line of sight and Bessie Hyde remarked on the little girl’s fashionable outfit saying, “I wonder if I shall ever wear pretty shoes again.” The couple then waved and departed to board their boat and shove off into the Colorado River.

Neither of them was ever seen again.

What Happened to Glen and Bessie Hyde?

Glen and Bessie Hyde Credit: When In Your State

November of this year marks the 92nd anniversary of the Hydes’ floating down the Colorado River and vanishing into thin air. Exactly what happened to the couple on their honeymoon remains an awe-inducing mystery to all that hear the story and guides down the Colorado River still bring up the mystery while sitting around the campfire at night. Sipping beers, the guides and the members of their group wonder aloud what cruel fate became of the Hydes.

On December 6, 1928, a search for the couple was launched by Glen’s father, Rollin, even before the couple was considered to be overdue at Needles, California. Then, on December 19, 1928, three weeks after the disappearance of the Hydes, their scow (a flat-bottomed boat capable of navigating shallow waters) was found floating and abandoned in perfectly good working order. It had been spotted by a search plane around river mile 226.

The Hydes, on the other hand, were nowhere to be found and there were no clues to suggest what had happened to them. There were no signs on the boat of having been battered by the rapids nor were there signs that the boat had been overturned at any point.

Peculiarly, the Hydes’ food and supplies for their journey were still strapped securely into the vessel, seemingly awaiting the return of their owners. A camera, recovered from the boat by Emery and Ellsworth Kolb, revealed the couple’s final photograph to have been taken near river mile 165, possibly on or around November 27th. There were no signs of disturbance apparent on the riverbank nor was there any sign of tracks leading away from the boat. The couple was simply gone.

Further evidence found by searchers seemed to suggest that the couple made it as far as river mile 226, Diamond Creek, where it is believed by many that they made camp. In Bessie’s journal, found aboard the couple’s scow, she noted that they had cleared mile 231 Mile Rapid.

While many people that first hear the peculiar tale of Glen and Bessie Hyde assume that the couple must have been unfamiliar with the area or ill-equipped to handle the dangers presented by the raging rapids, it should be noted that Glen was an expert boat builder. In fact, he handcrafted the couple’s 20-foot scow all by himself. Further, years before, he had spent time rafting down Idaho’s Snake and Salmon rivers. Sure, he wasn’t what one would call a pro necessarily but he was far from being an amateur.

Another theory that many people believe regarding the disappearance of the Hydes has to do with the immense pressure that the couple felt to accomplish the task at hand. Many people believe that in the Hydes’ desire to set a speed record for boating through the Grand Canyon, with Bessie becoming the first woman to successfully boat all the way through, the pressure caused them to get sloppy, leading to fatal mistakes along their journey. Bessie was a newbie at the time of the couple’s trip although she did have a few solid weeks of negotiating rapids under her belt. Still, if the reasoning for the couple’s disappearance was based on amateur mistakes, one would think that there would be evidence of this on their boat and in the surrounding environment where it was found.

Interestingly, historian Otis R. Marston made a compelling case that the couple was likely swept out of their boat when it hit submerged rocks in the heavy rapids near river mile 232. When describing the rapid, Marston noted:

“…pieces of granite wall lie submerged where they have damaged, snared, or capsized more boats than any other location in the canyon.”

On a commercial Grand Canyon rafting trip in the year 1971, an elderly woman said something that made this entire case all the more compelling. As the guides and members of the group all sat around the campfire discussing the mystery of the Hydes’ disappearance, the elderly woman announced to the other rafters that she was in fact the long lost Bessie Hyde. As the rafters continued to listen to her speak, filled with mixed emotions, she told them that she had in fact stabbed her abusive husband, Glen, before escaping the canyon on her own. This led the rafters to wonder if there was some truth to this woman’s claims or whether she was simply crazy.

It should be noted that the woman’s claims of Glen Hyde being an abusive husband are not rooted in any known fact. Further, when officials tracked down and questioned the mystery woman about her true identity, she later recanted this statement claiming that she had no idea what they were talking about. There was, however, some speculation after the death of famed rafter Georgie Clark in May of 1992 that she in fact was Bessie Hyde after a pistol and some documents (including, oddly, Bessie and Glen’s marriage certificate) were found in her effects after her death. However, no conclusive evidence to confirm this fact was ever found and, further, Clark’s early life is well-documented.

Photo of Georgie Clark at the time she was claiming to be the real Bessie Hyde. Credit: Grand Country Zephyr

A Body is Discovered

In 1976, the discovery of the skeletal remains of a young male on the canyon rim sparked talk that the body of Glen Hyde had finally been discovered. Theories surrounding the possible murder of the Hydes ran rampant when it was discovered that a bullet was lodged deep within the skull of the body. Suspicion that photographer Emery Kolb had somehow been involved in the deaths of the couple due to his being one of the last people to see them alive were further supported by the fact that the skeletal remains were found on his property. These suspicions were laid to rest, however, when a forensic investigation conducted by the University of Arizona concluded that the remains were that of a man no older than the age of 22 who would’ve died no earlier than 1972. This meant that these remains, in fact, did not belong to the long lost Glen Hyde.

The mystery surrounding the vanishing of Glen and Bessie Hyde still to this day mesmerizes and confounds all those that hear it. While the story still remains an unsolved case, the strange tale of the Hydes has spawned at least two non-fiction books, a novel, an episode of the popular television program Unsolved Mysteries, and even a musical.

To this day, travelers gather around their campfires in the Grand Canyon and share their own theories of what happened to Glen and Bessie Hyde on that fateful honeymoon trip. Was it murder? A fatal accident? Was it something that can’t be explained by any logical reasoning? To this day, we don’t know. Worst of all, we may never know the answer at all.