The Unsolved Valentine’s Day Murder Of 1945 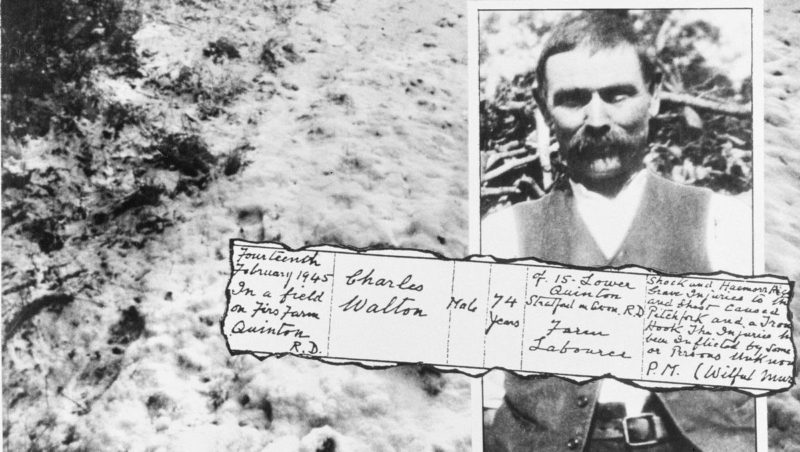 Ah, Valentine’s Day. Representative of love, devotion, and murder attributed to occultists practicing witchcraft- that’s what Valentine’s Day is all about. Oh wait, that’s just me?

Charles Walton, a 74 year old Englishman hailing from the village of Warwickshire in England was found dead on February 14th, 1945. His body was found in an area within the village known as Hillground, a spacious field at the foot of Meon Hill. Meon Hill has been infamous for being the sight of a slew of supernatural activity. It was commonly regarded as the setting of which the Devil himself kicked a boulder from the top of the hill in order to demolish the Evesham Abbey below.

On Valentine’s Day, Walton was discovered brutally impaled by his own pitchfork and his throat pierced with a hook- also his own tool. The most savage (and interesting) of Walton’s injuries, however, was the presence of a cross carved into his chest. It is said that Walton had been trimming the hedges surrounding Hillground when he was stalked and overtaken by an unknown attacker.

Due to the supernatural reputation of the setting in which Walton was found and the gruesome cross imagery cut into the victim’s chest, the investigation was directly elevated to the responsibility of Detective Inspector Robert Fabian of Scotland Yard. Unfortunately even in the case of such efforts by authorities, the notorious Valentine’s day murder has remained unsolved to this very day.

Witchcraft, a Secret Cult, and Murder

Charles Walton was well known in his village as an eccentric, while pleasant, neighbor. Intriguing rumors were abound within the community that Walton possessed powers and abilities to control animals with his mind. It was said that he was able to coax birds to eat seed directly from his hand with little effort and that he could calm vicious, barking dogs to complete domesticity with simply the sound of his voice.

When Walton was found dead, it was widely theorized within the community that he had found himself in deep trouble with some secret cult. Aside from his rumored abilities Walton also held a particular interest in things of a strange nature such as legends and folklore.

Walton’s neighbors whispered busily after his death that he must have been accepted into a cult of witches and warlocks due to his remarkable abilities until some event caused him to lose favor within the group. They decided that this must have led to his brutal demise. In their view, his body was used as a symbol to the community that there was something to fear lurking in the shadows.

The fact that Walton was killed on Valentine’s Day was also more significant than just it’s association with the holiday. February 14th, marked by the old calendar, was apparently the date associated with the pagan festival of Imbolc — further supporting the cause of supernatural forces in the Valentine’s day murder.

A Suspect, Too Close for Comfort

While the theory that Walton’s death was brought about by supernatural circumstances was the most popular, there was in fact at one time a “prime suspect” considered. Detective Inspector Robert Fabian investigated a man named Albert Potter, another member of the community, for suspected responsibility for Walton’s death. Potter had employed Walton on the day of his murder, to trim the hedges at Hillground.

Albert Potter, much like Walton, also had a reputation within Warwickshire. Potter was known as a dishonest businessman with a fiery hot temper. The man was well-known as an employer accustomed to paying his employees late (if at all) and embezzlement and juggling of funds. The case against Potter was not made any better when the story he gave investigators changed several times — providing few consistent answers to their various questions. Despite an unfortunate lack of evidence, Fabian was unable to prove Potter’s guilt and he was never charged in any crime.

While we will likely never know who (or what) is responsible for the Valentine’s day murder of Charles Walton, both theories are interesting. Was it a band of occult murderers or the plot of an aggressive businessman lurking close enough to strike? The cult idea is obviously more widely known and offered as up as explanation. Why is this more obvious, you ask?

Of the two theories, the supernatural explanation is more sensational, more exciting, and frightening. As humans, we have an innate fascination with the things that scare us most — it excites us. This is a psychology of the human experience that I plan to explore in detail in a later post.

In the meantime, the tragic Valentine’s day murder of Charles Walton — while unsolved, is certainly an unforgettable mystery.