The US Marine Corps And The Cat From Outer Space 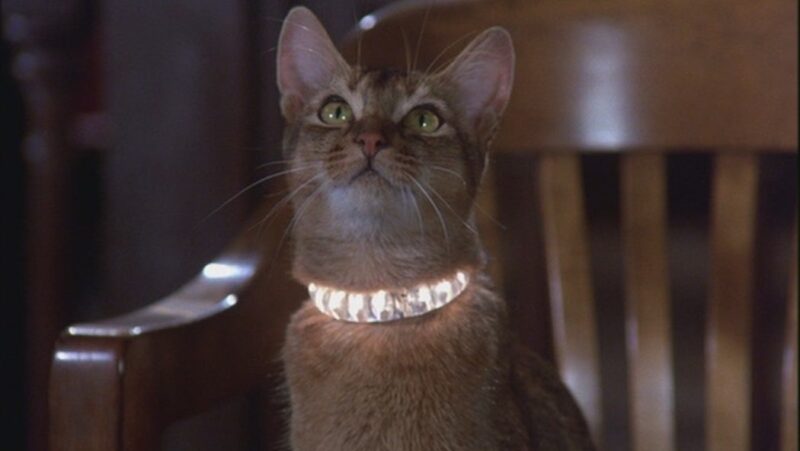 There I was, innocently digging through some 1970s entertainment liaison office reports from the US Marine Corps when all of a sudden I happened upon entries about The Cat From Outer Space.  Imagine my surprise.  Imagine my relief when, a few pages later, I found that the film was not supported by the US military after all.

For anyone who hasn’t seen it, The Cat from Outer Space is about a cat – named Jake – from outer space, who arrives on earth and promptly has its spaceship seized by the US military.  With the help of a few locals and a natty light-up collar that amplifies the space cat’s telekinetic and telepathic abilities, the cat gets into a sprawling adventure, which somehow winds up with it being granted American citizenship.  They really will let anyone in these days.

In February 1977, location manager James Tadevic toured a Marine base, looking for a large hangar to film some scenes for the movie.  The reports state:

Staff member escorted Mr. James Tadevic of Walt Disney Studios to MCAS, El Toro to take still photos of the LTA hangars located there. Tadevic has requested the use of one of the two hangars for filming a scene in an upcoming Disney motion picture, “Cat from Outer Space.” Filming is scheduled to begin in July.

It seems the Corps were skeptical about allowing the filming, due to the military’s role in playing the bad guys who seize (and keep secret) Jake’s spacecraft.  While the recommendation report is not available, the 1970s reports use this phrase when referring to something that requires further consideration or discussion.  At the time, the general US government approach to UFOs and extraterrestrials – whether feline or otherwise – was largely denial and deflection, so it seems unlikely that they’d appreciate this mini-Area 51 type of storyline.

Fortunately for the Marine Corps, they never had to officially reject The Cat From Outer Space.  An update in the report for April says:

Disney’s proposed motion picture “Cat From Outer Space” will not continue with request for use of location at MCAS El Toro. Alternate location has been found.

It is difficult to understate my relief at reading this, because if this film had somehow got past the fun police at the military’s Hollywood offices then I would have to re-evaluate my entire appreciation of cinema.  Fortunately, this story – just like the one in the film – has a happy ending.

The Cat From Outer Space Documents