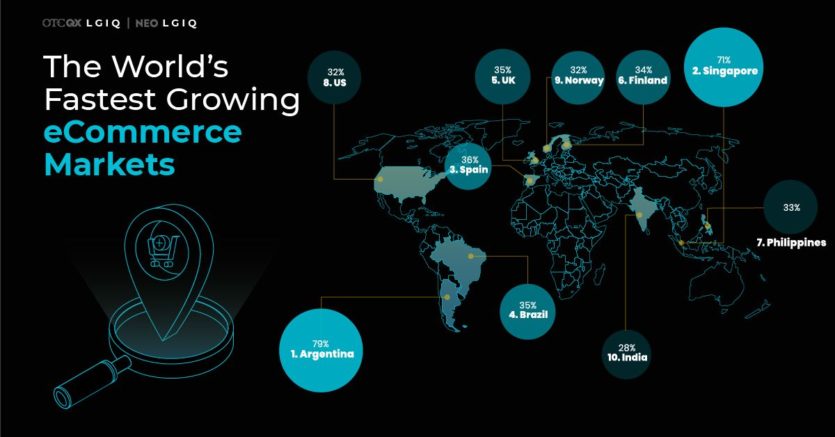 While the overall retail industry struggled amidst the global pandemic, eCommerce sales managed to reach unprecedented heights. In 2020, retail eCommerce sales grew by 27.6%, reaching a total of $4.28 trillion worldwide.

This article was written by Logiq and originally published by Visual Capitalist.

But which regions saw the biggest increases throughout 2020, and how does each market compare to one another? This graphic, presented by Logiq, explores the fastest growing eCommerce markets across the globe.

Which Markets Saw the Most Growth?

In 2020, Latin America’s eCommerce market saw the most growth of any region, surpassing Asia-Pacific’s growth for the first time since 2010.

Restrictions in Buenos Aires were on and off from late March until early November 2020, and after restrictions were lifted, citizens were encouraged to practice “intelligent” social distancing and be more cautious when socializing.

At the country level, Argentina was the fastest growing eCommerce market in 2020, with a 79% increase in online sales compared to 2019—almost double the worldwide country average.

Singapore was the second-fastest, with a 71.1% increase in eCommerce sales.

Keen to capitalize on this rising trend, Singapore has rolled out a number of policies and initiatives in an effort to support its digital industry.

For example, under the Skills Ignition SG initiative, several Singaporean government agencies have partnered with Google to provide training for aspiring tech workers.

Third on the ranking is Spain with a 36% increase in eCommerce sales. Spain was severely impacted by COVID-19—in the early days of the pandemic, cases in Spain rose quickly, causing strain on the country’s healthcare system and ultimately driving the country into strict lockdown, which forced consumers to turn to online shopping.

Though eCommerce sales in 2020 saw an overall increase, some industries saw more success than others. For instance, global spending on Food and Personal Care grew significantly (44.8%) in 2020, while Travel spending dipped more than 50%.

Of course, since travel is expected to bounce back by 2023, according to a recent report by the International Air Transport Association, these figures are likely to change in the near future.

While eCommerce has grown worldwide, each individual market looks slightly different, which means generic marketing tactics won’t work across the board.

That’s why companies need eCommerce support that caters to their unique needs if they’re hoping to level up their eCommerce game. Logiq is a holistic eCommerce platform that provides versatile services, which can help companies worldwide.

In this rapidly growing space, Logiq helps businesses better understand their audience, gather insight into the techniques that best serve them and ultimately gain their rightful piece of the pie.