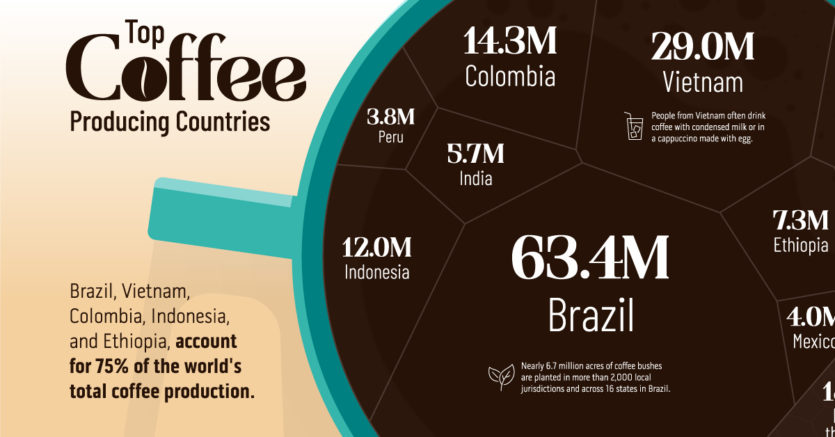 In many cities around the world, there’s a café on every corner, so it comes as no surprise that coffee is one of the globes’ top commodities. As the third most consumed beverage globally, after water and tea, coffee beans are in high demand almost everywhere.

This article was written by Anshool Deshmukh and originally published by the Visual Capitalist.

The top producing nations each produce billions of kilograms of coffee beans that find their way into the hands of eager consumers. According to the International Coffee Organization, a total of 169.6 million 60-kilogram bags of coffee were produced worldwide in 2020.

So, why does the world universally love coffee so much?

For The Love of Coffee

As most coffee lovers would tell you, drinking coffee is a complex and nuanced experience—there’s the rich aroma, the comforting warmth, and the loveliness of the ritual of sitting down with a fresh cup.

With the variety of ways it can be served and the jolt of caffeine it provides us, it’s not hard to see why the world loves its coffee. In fact, we love the beverage so much that humans have conditioned themselves to associate the bitter taste of coffee with a bout of energy and positive reinforcement.

So, where does the journey of each cup of joe originate? Let’s get to know the world’s top coffee producing countries.The World’s Coffee Production Leaders

At the end of 2020, the top 10 biggest coffee-producing nations held 87% of the commodity’s market share.

Here is a list of the top 10 largest coffee-producing nations in the world:

While some of the world’s top coffee-producing nations are well known, others may come as a surprise. More than 70 countries produce coffee, but the majority of global output comes from just the top five producers: Brazil, Vietnam, Colombia, Indonesia, and Ethiopia.

Brazil is a true powerhouse of coffee production. The country single-highhandedly produces nearly 40% of the world’s coffee supply.

Many areas in Brazil have a climate perfectly conducive to coffee farming. Coffee plantations cover about 27,000 square kilometers of Brazil, with the majority located in Minas Gerais, São Paulo, and Parana.

Brazil distinguishes itself from most other coffee-producing nations by drying the coffee cherries in the sun (unwashed coffee) rather than washing them.

The country is so influential to coffee production that the 60-kilogram burlap bags historically used to export beans from Brazil are still the worldwide standard for measuring production and trade.

Vietnam found a niche in the international market by focusing primarily on the less-expensive Robusta bean. Robusta beans can have up to twice as much caffeine as Arabica beans, giving the coffee a more bitter taste.

Though coffee has been grown in the region for well over a century, production skyrocketed through the 1990s after Vietnam’s communist government introduced economic reforms (known as Đổi Mới). Today, Vietnam accounts for more than 40% of the world’s Robusta bean production.

Coffee cultivation in Vietnam is also extremely productive. The country’s coffee yields are considerably higher than other top coffee-producing countries.

A popular advertising campaign featuring a fictional coffee farmer named Juan Valdez helped brand Colombia as one of the most famous coffee-producing nations. A coveted drink of choice, Colombian coffee is prized for its aromatic, mild, and fruity flavors.

Some of the rarest coffees in the Western world originate in Indonesia, including Kopi Luwak—a type of bean that has been eaten and defecated by the Asian palm civet. Coffee made from these coffee beans might cost you anywhere between $35 to $100 per cup.

Known for its full-flavored, down-to-earth, and full-bodied coffee beans, Ethiopia is the country that gave us the Arabica coffee plant. Today this type of coffee is considered to be the most widely sold in cafes and restaurants across the world.

The Future of Coffee Production

With global temperatures on the rise, good coffee may become increasingly challenging to grow. To future-proof good and continued growth of coffee beans, finding newer and hybrid blends of coffee beans is essential.

Several studies and research missions have found wild species of coffee growing off the coast of Côte d’Ivoire and in certain regions of Sierra Leone, which could be the answer to our coffee production problems. Coffee from these coffee plants tasted similar to the famous Arabica bean and also grew at higher temperatures.

Though the future of coffee production around the world is somewhat uncertain, our collective love of the morning cup of coffee will drive innovative solutions, even in the face of changing climate patterns.