These Are The World’s 10 Least Affordable Housing Markets 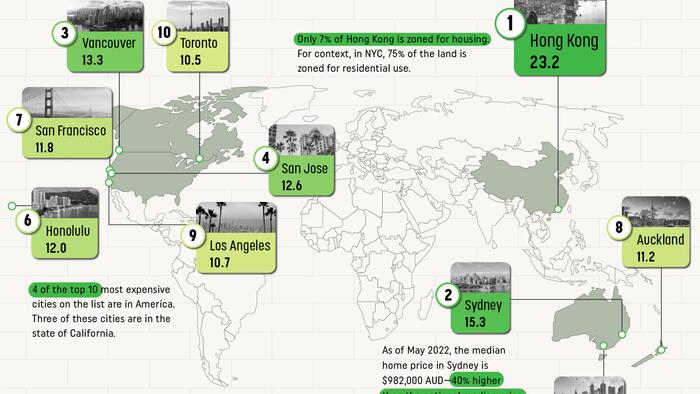 It’s become increasingly difficult for middle-class families to purchase a home over the last few years – and the global pandemic has only made things worse.

As Visual Capitalist’s Carmen Ang details below, the number of housing markets around the world deemed “severely unaffordable” increased by 60% compared to 2019 (prior to the pandemic), according to Demographia’s 2022 Housing Affordability Report.

This graphic looks at some of the least affordable housing markets across the globe, relative to median household income. The report covers 92 different cities in eight nations: Australia, Canada, China, Ireland, New Zealand, Singapore, the United Kingdom, and the United States.

Before diving in, it’s worth outlining the methodology used in this report, to help explain what’s classified as a severely unaffordable housing market.

To calculate affordability, a city’s median housing price and divided by its median household income. From there, a city is given a score:

All the cities on this graphic are classified as severely unaffordable⁠—and, for the 12th year in a row, Hong Kong takes the top spot as the world’s most unaffordable housing market, with a score of 23.2.

One reason for Hong Kong’s steep housing costs is its lack of supply, partly due to its lack of residential zoning—which only accounts for 7% of the region’s zoned land. For context, 75% of New York City’s land area is dedicated to residential housing.

Sydney moved up one spot this year, making it the second most expensive city to purchase a home on the list, with a score of 15.3. Besides Hong Kong, no other city has scored this high in the last 18 years this report has been released.

There are several theories for Sydney’s soaring housing rates, but industry expert Tom Forrest, CEO of Urban Taskforce Australia, boils it down to one fundamental issue in an interview with Australia Broker—supply isn’t keeping up with demand:

Middle-income earners were already feeling the squeeze prior to the global pandemic, but COVID-19 only exacerbated housing affordability issues.

As people began to work from home, high-income earners started to look for more spacious housing that wasn’t necessarily in the city center, driving up demand in suburban areas that were relatively affordable prior to the pandemic.

At the same time, supply chain issues and material costs impacted construction, which created a perfect storm that ultimately drove housing prices up.

But with interest rates rising and COVID-19 restrictions easing around the world, some experts are predicting a market cool down this year—at least in some parts of the world.