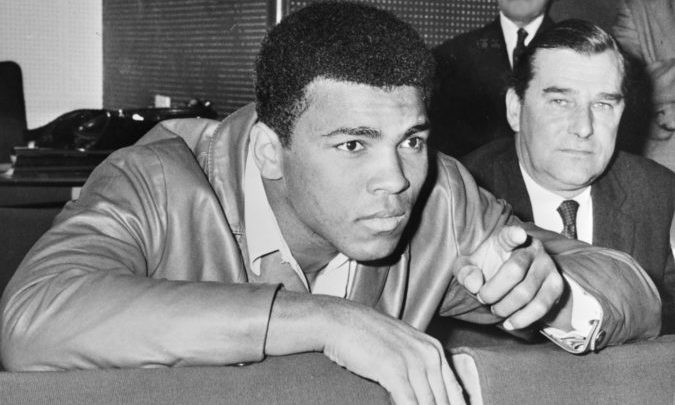 Muhammad Ali (born Cassius Clay) steps into the ring one final time to face off with Trevor Berbick in 1981. Ali, nicknamed “The Greatest,” began his professional boxing career in the light heavyweight division of the 1960 Summer Olympics. He captured the world heavyweight boxing championship in 1964. In addition to his legendary boxing career and fast footwork, Ali was also known for being a contentious objector to the Vietnam War. His refusal to the Vietnam War draft put a four-year hold on his boxing career until the Supreme Court overturned the draft evasion conviction in 1971. Despite this setback, Ali is the only three-time heavyweight boxing champion to date and has only five losses during his 35-year career, he bested 21 boxers for the world heavyweight title and won 14 unified title bouts.

Hockey legend, Wayne Gretzky, scored his 1,000th point in 1984. Gretzky was the eighteenth player in NHL history to reach the 1,000-goal mark and, at age 23, the youngest. He scored 1,000 goals in just 424 games for the Edmonton Oilers. As the center for the Oilers, Gretzky led the team to four Stanley Cup championships. In 1988, Gretzky was traded to the Los Angeles Kings and proved to be a formidable player and led the Kings to victory over his former team. As a player, Gretzky was known for his ability to improvise creative plays, his scoring accuracy, and what some called his uncanny hockey instincts. He was inducted into the Hockey Hall of Fame in 1999.

Mario Lemieux of the Pittsburgh Penguins scores five goals, five different ways, in a 1988 game against the New Jersey Devils. He scored on strength, on the power play, shorthanded, on a penalty shot, and into an empty net. The five goals carried the Pittsburgh Penguins to an 8-6 victory against the New Jersey Devils. He also assisted teammates on the Penguin’s other three goals. Lemieux, nicknamed “The Magnificent One,” was known for his speed, fakes, and dekes (feints). Despite numerous health problems, Lemieux was known as the “savior of the Pittsburgh Penguins” he was inducted into the Hockey Hall of Fame in 1997, immediately after his first retirement in 1997.

This article was written by Andrew D. Bernstein (NBA Photographer), cowritten by Veronica An.