This Month In Sports History: November 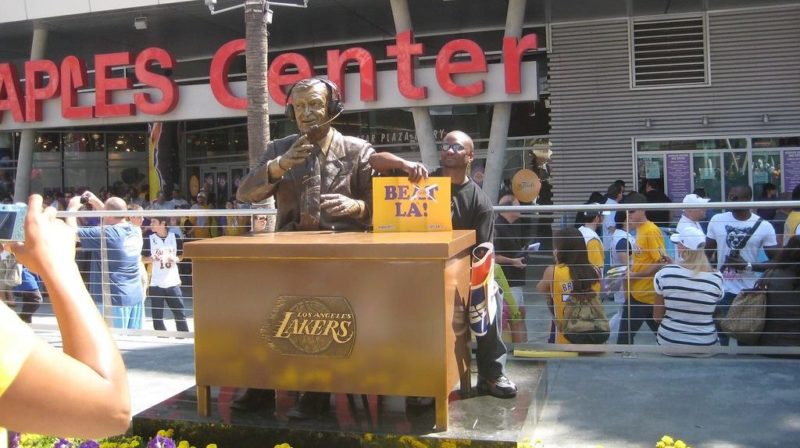 On this day in 1996, Los Angeles Lakers superstar Kobe Bryant became the then youngest player to make his NBA debut (18 years, 2 months, 11 days) in a 91-85 win over the Minnesota Timberwolves at the Great Western Forum. One of the greatest players to ever set foot on the court, Bryant backed up his competitive nature with his phenomenal work ethic and talent for the game. Bryant spent his entire 20 season career with the Los Angeles Lakers. During that time, he helped lead the Lakers to five NBA championships. In the 2009 NBA Finals, Bryant averaged 32.4 points, 7.4 assists, 5.6 rebounds, 1.4 steals, and 1.4 blocks. Bryant earned NBA Finals MVP and helped the Lakers defeat the Orlando Magic 4-1. In 2010, the Lakers repeated as champions and Bryant was again the Finals MVP. It was the first time the Lakers defeated their rival Celtics in a Game 7 in the NBA Finals. Bryant said that this was the most satisfying of all of his five championships. Bryant’s other accolades include NBA MVP (2008), 15x All-NBA Team selections, 12x NBA All-Defensive Team selections, 2x NBA scoring champion, and 18x NBA All-Star. Bryant’s no.8 and 24 jerseys were retired by the Los Angeles Lakers.

Roger Federer won the 2007 Tennis Masters Cup title when he beat David Ferrer in the Final in Shanghai, China. Federer is ranked no.5 by the Association of Tennis Professionals (ATP) and is known as a versatile, all-court player. Federer holds 103 career titles, no.2 in the Open Era, and has won the ATP Player of the Year five times (2004–07, 2009). He is credited with ushering in the Golden Age of tennis and was voted to receive the Sportsmanship Award 13 times and won the ATP Fans’ Favorite award 17 times.

In 1965, Chick Hearn began his streak of broadcasting consecutive Los Angeles Lakers’ games. By the end of the 2000-01 season, Hearn had broadcast 3,338 consecutive Lakers games, including preseason and playoff games. The legendary sportscaster was known for his staccato broadcasting style and coining an amazing list of iconic basketball phrases. What used to be known as “Chickisms,” are now simply accepted basketball lingo. Colorful phrases like “charity stripe,” “picking the pocket,” “finger roll,” and “slam dunk” were all invented by Hearn. Hearn was inducted by the National Sportscasters and Sportswriters Association Hall of Fame in 1997.

In 1996, Michael Jordan became the 10th player in NBA history to reach 25,000 points after scoring 35 in the Bulls 97-88 win over the Spurs. Jordan reached 25,000 in 782 games, faster than any other player except Wilt Chamberlain (691). Jordan finished his career with 32,292 points scored. In the 15 seasons that Jordan played in the NBA, he became a cultural icon and transformed the Chicago Bulls into one of the most successful franchises in the League. As a player, Jordan led the Bulls to two three-peats. Jordan was a six-time NBA Champion and was named NBA Finals MVP in all six finals. Jordan’s accolades include being a 14x All-Star, 5x NBA MVP, 10x All-NBA First Team, 10x NBA scoring champion, 3x NBA steals leader, and NBA Defensive Player of the Year. Jordan was inducted into the Naismith Memorial Basketball Hall of Fame in 2009 and his no.23 is retired by the Chicago Bulls.

Written by Andrew D. Bernstein (The Official Photographer For The NBA), And Veronica An.