This Month In Weird History 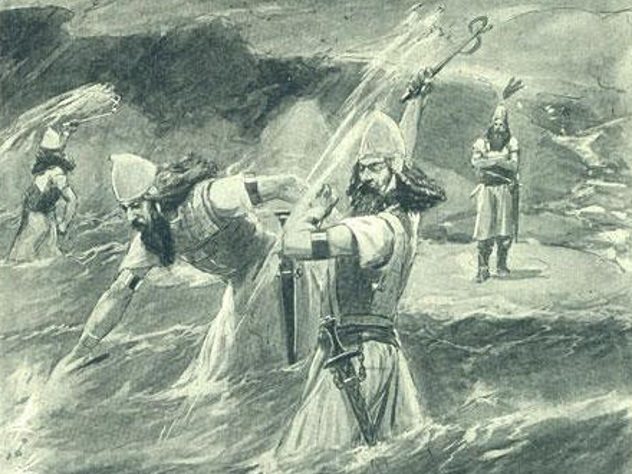 Odd, off-putting, hard to believe, strange, and sometimes even miraculous tales are found throughout human history. When reading these histories, you would be forgiven for wondering if you had accidentally grabbed the latest Dan Brown or Stephen King novel. This month we will explore the account of the Persian King Xerxes whipping the sea during the Persian invasion of Greece in the spring of 480 B.C. Is the tale fact, outright fiction, or a blend? You decide!

In the spring of 480 B.C., the Persian King Xerxes launched his long-awaited invasion of the Greek mainland with the largest army the world had ever seen to that point. Over 200,000 men marched in a column that would have stretched for miles from end to end. The King ordered a bridge built so his army could cross the Hellespont (in modern-day Turkey). The bridge was a fantastic engineering feat for the time, as it had to span just under one mile of deep ocean water. Unfortunately for the Persians, a massive storm destroyed the bridge before the army could cross. Xerxes reacted with fury and immediately had his engineers executed. Even this act of brutality was not enough to satisfy the King. Xerxes next had the ocean lashed 300 times, and manacles dropped into the water to symbolize the submission of even the forces of nature to the King. The soldiers who flogged the water were supposed to have yelled out, “your master is imposing this penalty on you for wronging him… King Xerxes will cross you whether you like it or not.” The Persians eventually rebuilt the bridge. The army crossed into Europe bound for the famous battles with the Greeks at Thermopylae, Salamis, and Platea and their eventual defeat.

It is an amusing story, but did King Xerxes have the sea whipped? Historians disagree and are limited to one source: the Ancient Greek historian Herodotus who wrote within three decades of the war. Herodotus was one of the first people to record narrative history that sought to provide an accurate account of the past with detailed explanations for why events happened. For his pioneering work, Herodotus is often honored with the title “the Father of History.” Unfortunately for those eager to see the story completely vindicated, Herodotus is also known to some modern historians as the “Father of Lies.” Why this dueling assessment of Herodotus? Herodotus described his methods as traveling around the Mediterranean so he could personally view documents and interview the eyewitnesses. While this sounds great for his accuracy, the issue is that he was eager to pass on good stories and seldom let skepticism stand in the way of being entertaining. Herodotus wrote many stories that modern readers find hard to accept. These stories include the resurrection of a pot of cooked fish and a legend about the temple of Delphi magically defending itself with lightning bolts against the invading Persians. Herodotus provided much accurate information about the war that archeology can verify but seamlessly mixed in weird accounts historians cannot verify.

Our Verdict: The invasion and the storm are undoubtedly true events. We can never know how Xerxes reacted, but the account is plausible given other reports of ancient Kings and Emperors trying to take their wrath out on a force of nature (a god in their eyes) who failed them.