Those 16 To 19 Years Old Have Returned To Work, Other Age Groups Haven’t 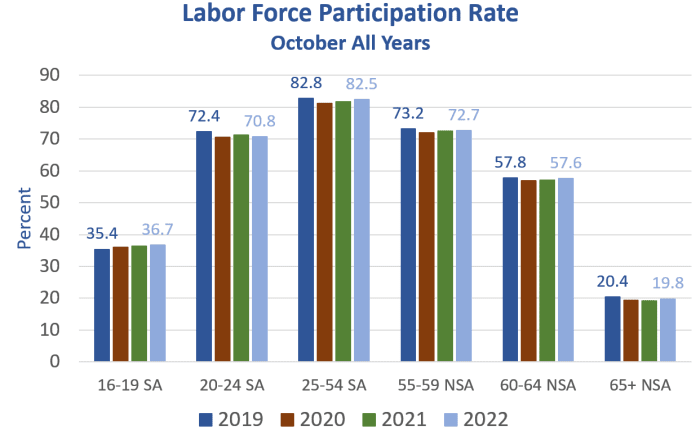 Labor Force Participation data from the BLS, chart by Mish

Where are older zoomers hiding?

Labor Market Mystery: Where Are the Older Gen Z Workers?

The exodus from the labor force in the pandemic’s early months has mostly reversed, but one group remains oddly absent: people in their early 20s.

That equals a shortfall of about half a million workers in their early 20s when comparing the current size of that workforce with 2019 levels.

In the past, a decline in labor-force participation among younger people has usually coincided with an increase in their school enrollment, generally reflecting higher relative demand for educated or highly skilled workers, especially in a weak labor market, economists said. That’s what happened during the 2007-09 recession—but it hasn’t been the case this time around.

About 1.5 million fewer students were enrolled in college this fall compared with before the pandemic, according to the National Student Clearinghouse, an educational nonprofit. College enrollment had been declining for a decade in part because of concerns about student debt and the rise of alternative credentials.

That’s a free link is you wish to explore more.

Grad school is up. but overall college enrollment is down.

In response to the WSJ article I created the lead chart. Participation is down in all but age group 16-19.