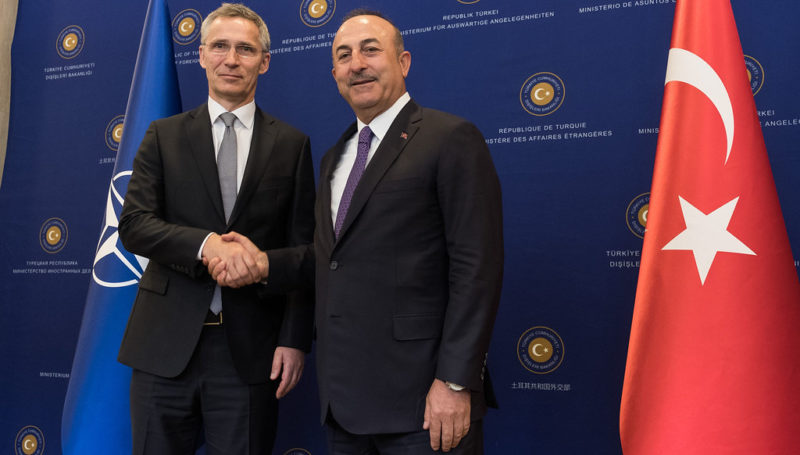 At the opening of the NATO Maritime Security Center of Excellence in Istanbul, one of several NATO centers and commands in Turkey, the nation’s defense minister, Hulusi Akar, delivered an address that both touted Turkey’s role as a NATO powerhouse and expressed chagrin that the military bloc isn’t assisting it in its now 44-year-old war against ethnic Kurds in several nations. His speech followed by a day a conversation he held with his American opposite number, Defense Secretary Lloyd Austin, whom he will meet on Monday at NATO Headquarters.

This article was written by Rick Rozoff and originally published by Antiwar.com.

Three days before the 30-nation military bloc holds its summit in Belgium, Akar advocated that NATO, already the largest and long-lasting military alliance in history – substantially so – become yet stronger under current global conditions: “NATO maintains its raison d’etre and the alliance’s importance is gradually increasing. That is why NATO needs to be further strengthened and function in the true spirit of an alliance.” He also said that as “NATO is more meaningful and stronger” currently – in large part due to Turkey – it “will move forward into the future with more confidence.” As NATO has always been and will always remain a military bloc, moving forward with confidence is a euphemism for acting more aggressively and perhaps adding to war trophies garnered in the Balkans, Afghanistan and Libya.

To remind the U.S.-dominated alliance how indispensable his country is to it, the Turkish defense minister boasted of Turkey possessing NATO’s second-largest armed forces and of being a state that puts “NATO at the center of its own security by sharing the burden and values of the alliance and is at the same time at the center of NATO’s security.” Voicing the same sense of appreciation for Turkey’s unique role in the bloc, NATO Secretary General Jens Stoltenberg recently stated, “we continue to work closely with the NATO Ally, Turkey, in stabilizing our southern neighbourhood.”

Neither Akar nor Stoltenberg mentioned that Turkey is also NATO’s only member with territory in Asia and the only one that borders the Middle East – Iraq, Iran and Syria – and the Caucasus – Armenia, Azerbaijan and Georgia. Nor that this year NATO put Turkey in command of its Very High Readiness Joint Task Force, which recently completed the 4,000-troop, 12-nation Noble Jump 2021 exercise in the Black Sea, and that Turkey will take over the Hamid Karzai International Airport in Afghanistan in a $130 million deal with NATO. Perhaps out of modesty.

Turkey’s defense chief also said that his nation is one of NATO’s top five contributors of troops and military equipment. It spends, according to NATO dictates, 2% of its gross domestic product on the military. He also engaged in this rodomontade: “I want to emphasize that Turkey, despite being busy with the risks, threats and dangers in the region, continues uninterruptedly to contribute to the alliance’s exercises, force structure and cadres while doing what is necessary to protect NATO and Europe’s borders against terrorism, smuggling and human trafficking.” Turkey is Leonidas at the Thermopylae Pass, protecting Europe from the uncivilized world.

He brushed off the question of Turkey purchasing S-400 anti-aircraft weapons from Russia, a bone of contention between Ankara on the one side and Brussels and Washington on the other: “Turkey’s contribution to NATO and NATO’s cooperation with Turkey is far more deep and comprehensive than the…S-400s.”

But in what could be construed to be an effort to call in a debt, he dressed NATO allies down for not supporting Turkey in its war against supporters of the Kurdish Workers’ Party (PKK) and organizations Turkey claims are affiliated with the latter in no fewer than three countries: Turkey, Iraq and Syria. Turkey has, simply put, invaded the last two nations and established military bases in both, with NATO, the European Union and the U.S. rendering no complaints. That’s not good enough for Turkey, however.

The defense minister accused his NATO allies of having abandoned his country in its hour of need, of having “left it alone” in the face of terrorism. Although the Brussels-based bloc fights against terrorism elsewhere in the world, in the Middle East it refuses to support Turkey’s wars in Iraq and Syria, especially the latter. “Turkey has repeatedly called on its allies to fight together against the YPG [People’s Protection Units]/PKK and Daesh terrorist organizations in northern Syria, which threaten our national security and regional stability.” What a priceless opportunity for another NATO military operation, he intimated. And what a violation of trust, what an unconscionable lack of gratitude toward Turkey by not availing itself of the chance.

He added: “Time and again, we told our NATO allies about the need to create a safe zone in Syria. We even agreed on some plans, but the requirements of these agreements were not fulfilled and Turkey was left alone in the fight against terrorism.” The defense chief lambasted the NATO member state with the largest armed forces, the U.S., for providing military training and equipment to the YPG, which he had the temerity to claim presents a threat to Turkey.

On the same day Turkey’s President Recep Tayyip Erdoğan said his country had “secured most of the areas in Syria near the Turkish border,” as part of his “determination to complete the construction of a great and powerful Turkey, which is the hope of all our friends and brothers in our region….” His increasingly bellicose foreign policy, as has been evidenced in recent years in and in relation to Iraq, Syria, Libya, Nagorno-Karabakh, Afghanistan, Yemen, Cyprus and Ukraine, has been one actuated by racial, religious and linguistic loyalties far more than any principles of international law. It’s not a difficult task to decipher who he means by friends and brothers.

It’s not impossible that Turkey’s NATO allies will give heed to Defense Minister Akar’s combination of admonition and appeal and abandon the Kurds in Syria as well as Iraq to Ankara’s less-than-tender mercies. If so it would not be the first time Kurds have been betrayed by the West.