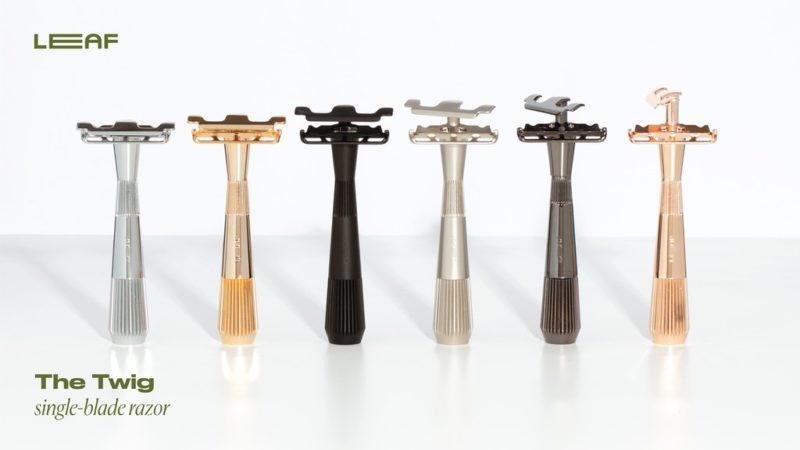 Image Courtesy Of Twig And Kickstarter

I’ve mentioned the Leaf razor a number of times on Sharpologist (including HERE and HERE).  The original Leaf razor may be the most “flexible” razor I know of, in terms of how you can use it: load one, two, or three blades on a pivoting head platform that’s great for a number of different shaving circumstances. And the blades for the Leaf are double edge (DE) razor blades snapped in half so blade choices are much wider (and cheaper!) than cartridge razors.

This article was written by Mantic59 on Sharpologist.com.

But Leaf decided they wanted to take a slightly different approach for their next razor.  They still wanted to used snapped-in-half DE blades but in a much different format. From the Twig crowdfunding page:

“We first had the idea for The Twig back in 2016, while we were running our campaign for The Leaf razor on Kickstarter. So we designed a small prototype, and built an opt-in system for users of The Leaf razor to grab a free prototype of The Twig to try out. We sent out thousands of these little guys, and received so much incredible feedback over the past two years.

“All of that feedback went into the upgrades, modifications and final design decisions for The Twig. So this truly is a razor designed by our users. We are confident that whether this is your first foray into shaving plastic-free, or if you’re looking to pair The Twig with your Leaf razor — that you’re going to love this new shave.”

“Meet our version of a classic safety razor—with a single-blade, fixed-head design. The Twig is specifically designed to be easy to use and gentle on your skin, and it delivers a smooth shave that’s better for the environment. Patent pending.”

“Designed with the smallest safety razor head available. This makes it the most agile and accessible shave, tight spots and crisp edges are a breeze.”

“Unlike traditional double-edge safety razors, The Twig is tuned to be forgiving for a quicker, easier learning curve.”

The crowdfunding campaign was hugely successful, raising well over US $155,000 for final design and production.

Weight: 2.5 oz (it’s about 68 grams without blade on my digital kitchen scale)

My Experience With The Leaf Twig Razor The first thing that I noticed about the production Twig razor is the build quality.  It looks good and “feels” substantial in the hand–noticeably better than any of the prototypes I tried.

The next most noticeable thing for me is blade loading.  Loading a half DE blade can be a bit tricky since the blade is comparatively small.  Loading a Twig may not be quite “stupid simple” but it’s very easy: get the blade close to the correct position and the magnetic head base holds the blade so you can just use the tip of your finger against a back corner of the blade (opposite the blade edge) to move it into position (popping into a post on each side of the head base).

Prototypes I tried did not have the magnetic head base so this was a welcome addition to the final product for me!

The Twig loading/unloading mechanism is kind of similar (or at least familiar) to “twist to open” double edge razors: turn the bottom dial and the top of the razor head rises off the base and twists out of the way.

Both “factory-made” half DE blades and DE blades snapped in half myself work fine for me in the Twig (some other razors that use half DE blades prefer one or the other for best results).  This means you have a wide choice of blades that work best for you.

Like many single edge razors, the Twig head is angled for a more natural, comfortable hand grip.

The shape of the razor makes it quite “bottom heavy” with a center-of-gravity near the bottom of the handle.  I prefer “top heavy” razors with the center-of-gravity nearer the head but admittedly this is a bit of a “nit pick” personal preference.   I still get comfortable shaves (from the hand-holding perspective) with the Twig.

I find the “sweet spot” of blade angle range comparatively wide with the Twig so I think it would classify this as a “forgiving” razor and I think the “aggressiveness” of the razor is somewhere between the typical cartridge razor and the average double edge razor. Of course the aggressiveness of the razor also depends on the specifications of the blade and here again you have a range of options, using different blade brands to make the Twig milder or more aggressive.

The Twig blade head is so small that it makes getting into tight areas (like under the nose or…ahem…”intimate areas”) a non issue.

Bottom line, I get great shaves with the Twig razor.

Someone using a typical consumer cartridge razor will probably find the learning curve getting used to shaving with the Twig to be shorter than using a double edge razor.  And using the Twig may also give the shaver more blade options than they’ve ever had before, allowing them to tweak their shave for best comfort and efficiency.

Leaf is targeting the average cartridge user looking for a more environmentally friendly product and I think the Twig razor hits that target.