Used Car Are Prices Up 42 Percent In One Year, Have They Finally Peaked? 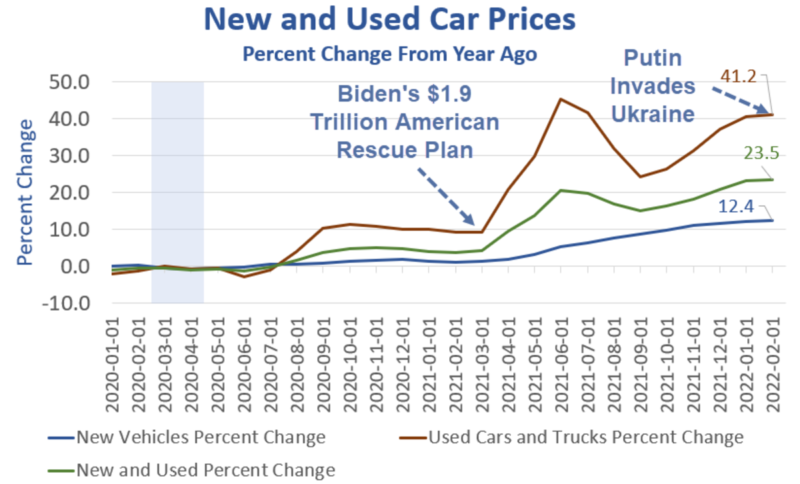 Car prices new and used have been on a year. What’s going on?

The US federal government sent out three waves of stimulus payments since the start of the covid-19 pandemic in March 2020. Here’s a look back at Three Rounds of Stimulus.

Why Did the CPI Finally Jump?

Those blaming money supply have the wrong narrative. It was FREE MONEY.

Note those three spikes on that top yellow line. The biggest one was courtesy of the Biden Administration.

Those were three rounds of free helicopter drop money.

The CPI took off after Biden did a massive shotgun blast of free money to nearly everyone.

In previous posts, I stated two rounds of stimulus happened under President Biden. Technically that is true, but the authorization of the second round was by Trump.

The third round of stimulus, Biden’s American Rescue Plan, was tremendous overkill. The economy and jobs were already in a fast recovery. Yet, the overall $1.9 trillion package was the largest by far.

I got a phone call a few days ago from a nearby car Toyota dealer (TD) it went like this.

Seriously, that was the call. It shows how desperate dealers are for cars. But it also got me thinking: This has to be close to the top in used car prices.

Meanwhile, I am pleased to report this exciting news: “Government Spending Reduces Debt.”

Also From the Rabbit Hole