A video of a kangaroo hopping and rushing to enter the gate of the Russian Embassy in Australia is circulating on social media.

The video was shared on Thursday by the official Twitter account of the Russian Embassy in Australia.

The CCTV cameras outside the embassy captured the video. The caption of the tweet said they recorded  “an attempted unauthorized access”.

“No harm was done”, the caption read, possibly referring to the animal’s safety. The kangaroo’s attempt to enter the gate was unsuccessful and it hopped away.

The video garnered some funny responses with Twitter users sharing the video with witty captions.

Twitter user Bakhti Nishanov made a comment about the Russia-Ukraine invasion, saying the kangaroo chose its side in the war. 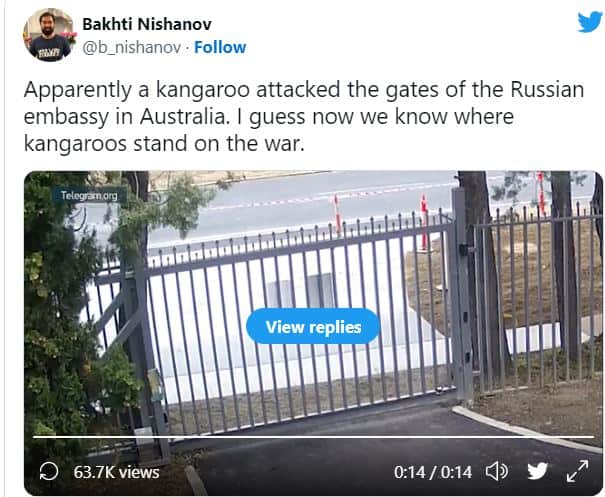 “You’ve got it wrong. Kangaroo was trying to defect. Drunk Russian embassy staff didn’t let it in,” one person replied. Another person wrote: “Thank god my heart couldn’t take a pro-war kangaroo.”

Not the first time Russian embassy was under ‘attack’

There have been previous incidents of the Russian Embassy under ‘attack’.

Some months ago, a flaming car crashed into the Russian Embassy in Bucharest, Romania, Euro Weekly News reported.

On April 6, Twitter users shared videos of a car covered in flames shoved into the gates of the Russian Embassy. The police stood by unable to do anything.

Firefighters were able to extinguish fire, but the driver passed away at the scene  after ‘dousing himself in petrol’, Daily Mail reported. There were no casualties at the building, the authorities informed.

“We must state with regret that whatever the motives of the driver, there is no doubt that he committed this act under the influence of an explosion of anti-Russian hysteria in connection with a staged provocation in the city of Bucha,” The Russain Embassy added.

On March 7, the Dublin police arrested a man after he smashed his lorry through the gates of the Russian embassy on Orwell Road. Moreover, the perpetrator also reversed his vehicle and then came to a standstill at the front of the building. A crowd of people cheered for him, Euro Weekly News reported.