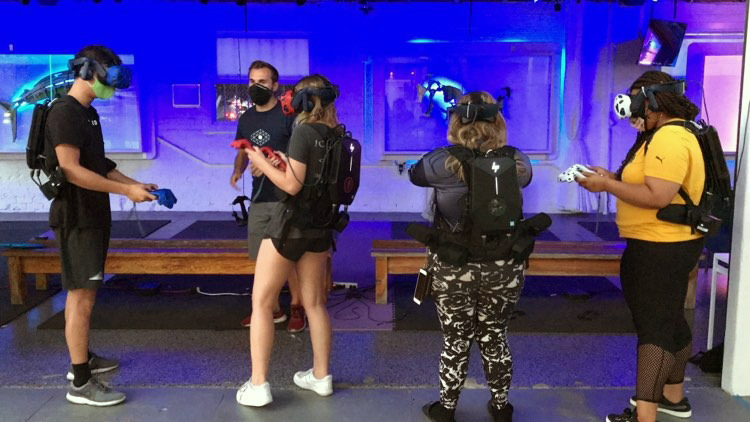 It is a warm summer evening, and just half a block off of downtown Santa Barbara’s busy restaurant and bar district, four people are wearing some strange looking headsets and masks as they walk around a patio, pushing some handheld game controllers. They are off in their own world as they shout things like “Watch out,” and “Shoot the monsters!” They are at a Virtual Reality studio, which is like a gigantic video game that immerses the players in the game.

Surreal Virtual Reality Studio is part of a growing string of VR businesses around the world that are taking video technology to the next level. Sophisticated headsets, and high-end computer set-ups allow for highly interactive gameplay that is unaffordable for home gamers.

Surreal Studio manager Mark Carlson explains the concept as an alternate reality created through a computer. The computer is connected to a headset that renders a virtual environment around you. Physical actions like turning your head, or moving your arms around, correspond to action in the virtual space, which creates the immersive experience. In most games, you have two controllers with grips in the form of hands. In the case of the game “Beat Saber,” you use two lightsabers to cut bricks to the timing of the music.

The Santa Barbara VR Studio is located on the 400 block State Street in Santa Barbara, which is part of the city’s downtown area. It is in a converted auto shop. Because the building has big garage-style doors that open to a patio area, the business can stay open, while enclosed locations like movie theaters are closed due to COVID-19 health orders.

Carlson says protective measures are taken to keep people safe. These measures include a face liner being put in for each headset, then taken out after each use, and sprayed with CDC-approved sanitizer. The gear and controllers being wiped down and providing a hand-sanitizer to each player before they put on the gear. Players are also required to wear masks at all times.
While gamers might feel at home with the concept of VR, regular people are often the ones who walk away excited about the experience. Carlson says very little technical knowledge is required. Putting on the gear and getting instructions on how to use it only takes a few minutes.

The studio is an entertainment experience now, but Carlson says he sees the technology eventually becoming commonplace in our lives. It can also be used for education and research. The surge of people using Zoom and other online technology during the COVID crisis is conducive to growing interest in everyday practical applications.

VR products can essentially be separated into two categories: lower-cost consumer products, and higher quality, more expensive technology with a niche base. Oculus, a VR headset company owned by Facebook, is going further in the direction of wireless consumer-friendly software. Gaming company Valve created the Valve Index headset and released it along with its headliner game, “Half-Life: Alyx.” It is offering perhaps the highest-quality consumer VR experience suitable for home gamers. The HTC Vive is a VR headset developed by HTC and Valve, which is what the Santa Barbara VR studio uses. These headsets are among those that use “room-scale” tracking technology, which allows you to move through the simulation rather than passively observing the surroundings.

The most unique thing about the Santa Barbara VR studio is that they have “Free-Roam VR,” which allows players to walk around in a designated outdoor space, with a capacity of up to four players at a time. There are about 20 different single-player or multiplayer games and experiences. Some of the multi-player games include escape rooms, arcade games, and shooting games. One of their most popular games is called the “The Raft,” in which four players work together to get out of the swamp on a raft, or risk being infected by evil supernatural aliens.

Carlson believes that VR is going to be the next big thing, possibly more popular than smartphones. He thinks many of our social interactions will be through the use of VR, as well as many types of entertainment. Carlson brings up the Steven Spielberg film “Ready Player One” as a vision of what the future might hold.

Ella Onishuk of Santa Barbara is one of the VR players at the studio. It was her first experience with the technology. She said her experience playing “The Raft” was fun and felt like she was actually there battling aliens.