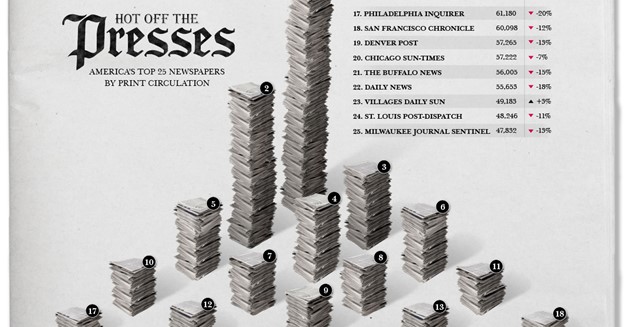 Most people today—more than 8 in 10 Americans—get their news via digital devices, doing their reading on apps, listening to podcasts, or scrolling through social media feeds.

This article was written by Avery Koop and originally published by the Visual Capitalist.

It’s no surprise then that over the last year, only one U.S. newspaper of the top 25 most popular in the country saw positive growth in their daily print circulations.

Based on data from Press Gazette, this visual stacks up the amount of daily newspapers different U.S. publications dole out and how that’s changed year-over-year.

Extra, Extra – Read All About It

The most widely circulated physical newspaper is the Wall Street Journal (WSJ) by a long shot—sending out almost 700,000 copies a day. But it is important to note that this number is an 11% decrease since 2021.

These papers, although experiencing negative growth when it comes to print, are still extremely popular and widely-read publications digitally—not only in the U.S., but worldwide. For example, the New York Times reported having reached 9 million subscribers globally earlier this year.

The one paper with increased print circulation was The Villages Daily Sun, which operates out of a retirement community in Florida. Elderly people tend to be the most avid readers of print papers. Another Florida newspaper, the Tampa Bay Times, was the worst performer at -26%.

In total, 2,500 U.S. newspapers have shut down since 2005. One-third of American newspapers are expected to be shuttered by 2025. This particularly impacts small communities and leaves many across America in ‘news deserts.’

Regardless of print’s downturn, digital subscriptions remain much higher for most of these papers. As one example, The Washington Post has over 3 million online subscribers, compared to their 159,000 print readers.

To put things in perspective, around 24 million print papers now circulate throughout the U.S. on any given day. But looking back at the industry’s peak in the 1980s, almost 64 million were distributed on any given weekday.

And digital is not done growing. Newsroom hires have been ramping up for “digital-native” news sites—publications that started online and never had a print version. On the flipside, employment at traditional papers has more than halved since 2008.

American news media can be extremely divisive. Many newsrooms across the country play into fear, sensationalism, and partisan politics.

Digital news only makes this worse, utilizing algorithms designed to keep a person’s eyes on the page longer, pushing stories with narratives a person shows interest in, and often taking them down a rabbit hole of fringe information—sometimes towards the extremes.

Additionally, the business of journalism is an increasingly less lucrative industry. Most revenue comes from digital ads running on news sites—so rather than selling the news to consumers, it’s the time and attention of consumers that is being sold to advertisers. Furthermore, some of the best quality content is locked up behind subscription-based paywalls.

Print may actually be one way to avoid some of the more obvious issues, particularly because there’s no way to track the data on which stories you read. But all publications still have inherent bias, of course, and it’s clear that print papers are not bouncing back any time soon.