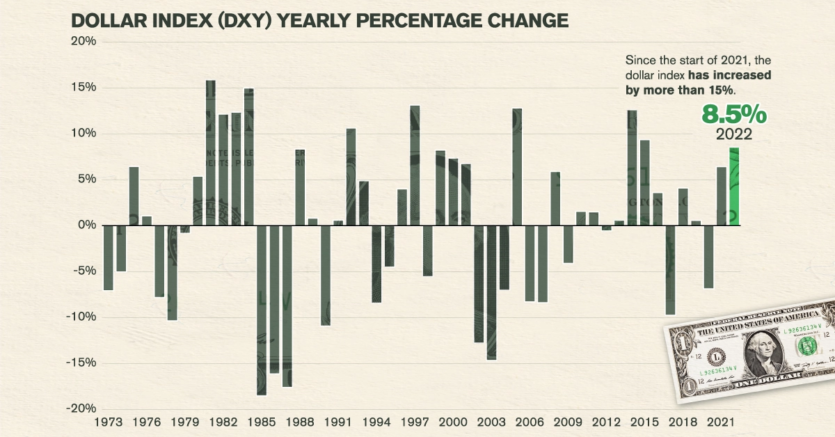 In a highly volatile and difficult year for many currencies and equities, the U.S. dollar has been a safe haven for investors.

The greenback has provided exceptional stability, with almost every currency around the world declining against the U.S. dollar in 2022.

This was originally posted on Elements. Sign up to the free mailing list to get beautiful visualizations on natural resource megatrends in your email every week.

This graphic visualizes almost 50 years of the Dollar Index’s returns along with the decline of major currencies against the U.S. dollar in the past two years using price data from TradingView.

As shown in the graphic above, the past two years have seen nearly every major currency lose value against the U.S. dollar.

One of the currencies hit hardest is the euro, which briefly fell below parity (meaning the euro was worth less than one U.S. dollar) in September and October of 2022, before recovering with a 5.3% rally in November.

However, the Japanese yen was the major currency hit hardest, having fallen more than 25% since the start of 2021. At the yen’s lowest point this year in October, the currency breached 24-year lows, resulting in the Bank of Japan intervening with $42.8 billion to support the country’s falling currency.

The Swiss franc and Canadian dollar have been the most resilient major currencies against the U.S. dollar since 2021, largely due to the financial and political stability of those nations. Along with this, Canada has benefitted from surging crude oil prices in 2022, exporting the majority of its crude oil across its southern border to America.

Three Reasons for the U.S. Dollar’s Strength in 2022

A variety of factors have contributed to the U.S. dollar’s strength in 2022. The rapid raising of interest rates by the Federal Reserve and tightening of their balance sheet has resulted in U.S. dollars becoming a more scarce and valuable yield-bearing asset.

As interest rates have risen, so have yields for savings accounts and fixed-income securities like U.S. treasuries, making them a more attractive alternative for investors.

At the same time, falling equity prices (especially in the technology sector) only further incentivized investors to pull out of riskier equity markets into the safety of the dollar.

Lastly, compared to many other global economies, the U.S. economy has remained resilient with the fewest risks on its horizon. Europe continues to face an ongoing energy crunch with the Russia-Ukraine conflict nearby, while China’s zero-COVID policies have hampered the country’s manufacturing sector, as well as other industries.

While the U.S. dollar has surged for much of 2022, its rally has started losing steam in the final months of the year.

In September of 2022 the Dollar Index was up 20% on the year reaching a high of 114.8, but has since retreated and given back more than half its gains for this year so far.

Investors around the world will be watching closely to see if the U.S. dollar’s rise will continue, or if this end-of-year reversal will carry through and provide major currencies some relief going into 2023.