The Most Widespread Blood Types, by Country

Blood is essential to the human body’s functioning. It dispenses crucial nutrients throughout the body, exchanges oxygen and carbon dioxide, and carries our immune system’s “militia” of white blood cells and antibodies to stave off infections.

This article was originally written by Anshool Deshmukh and originally published by Visual Capitalist.

Using data sourced from Wikipedia, we can map the most widespread blood types across the globe.

Of the 7.9 billion people living in the world, spread across 195 countries and 7 continents, the most common blood type is O+, with over 39% of the world’s population falling under this classification. The rarest, meanwhile, is AB-, with only 0.40% of the population having this particular blood type.

Breaking it down to the national level, these statistics begin to change. Since different genetic factors play a part in determining an individual’s blood type, every country and region tells a different story about its people.

Even though O+ remains the most common blood type here, blood type B is relatively common too. Nearly 20% of China’s population has this blood type, and it is also fairly common in India and other Central Asian countries.

Comparatively, in some West Asian countries like Armenia and Azerbaijan, the population with blood type A+ outweighs any others.

Here is a breakdown of the most common blood types in the U.S. by race: 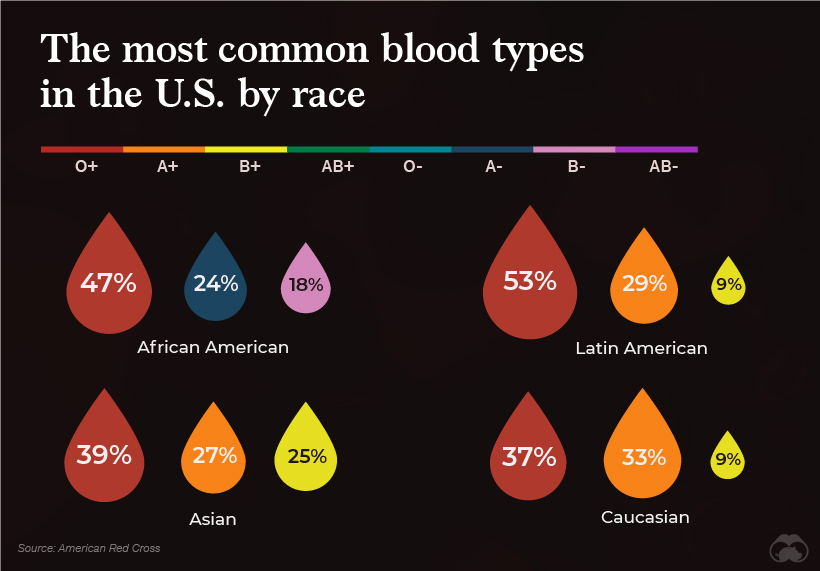 O+ is a strong blood group classification among African countries. Countries like Ghana, Libya, Congo and Egypt, have more individuals with O- blood types than AB+.

The A blood group is common in Europe. Nearly 40% of Denmark, Norway, Austria, and Ukraine have this blood type.

O+ and A+ are dominant blood types in the Oceanic countries, with only Fiji having a substantial B+ blood type population.

More than 41% of the population displays the O+ blood group type, with Lebanon being the only country with a strong O- and A- blood type population.

Nearly half of people in Caribbean countries have the blood type O+, though Jamaica has B+ as the most common blood type group.

Here is the classification of the blood types by every region in the world: 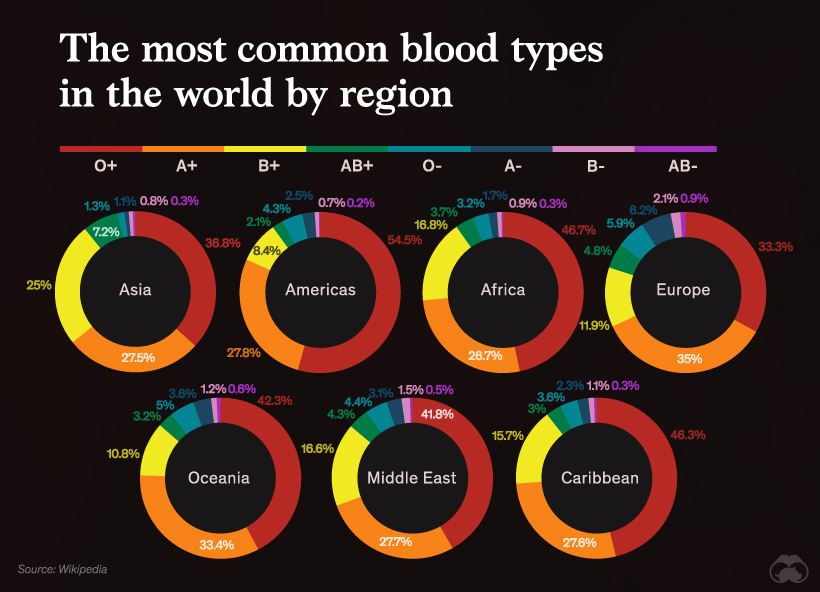 Even though ethnicity and genetics play a vital role in determining a person’s blood type, we can see many different blood types distributed worldwide.

Blood provides an ideal opportunity for the study of human variation without cultural prejudice. It can be easily classified for many different genetically inherited blood typing systems.

Our individuality is a factor that helps determine our life, choices, and personalities. But at the end of the day, commonalities like blood are what bring us together.