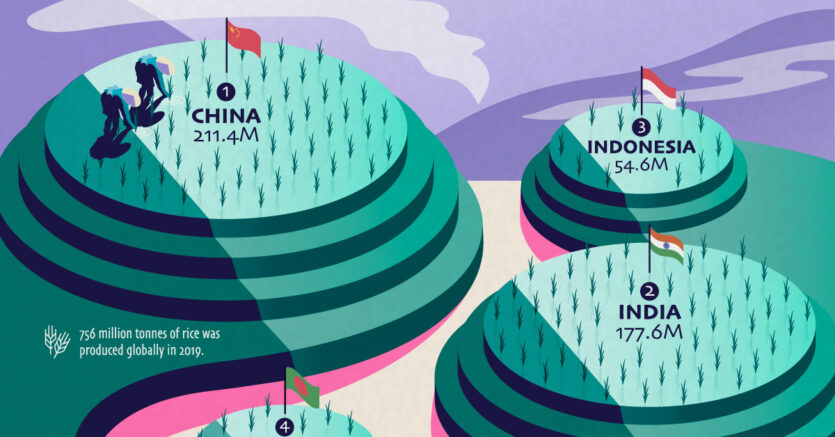 It’s hard to overstate the importance of rice to the world.

This article was written by Omri Wallach and originally published by Visual Capitalist.

As a staple food, over half of the global population depends on the crop as a major part of their diet. In fact, rice is considered a vital part of nutrition in much of Asia, Latin America, Africa, and the Caribbean, and is estimated to provide more than one-fifth of the calories consumed worldwide by humans.

This graphic highlights the world’s 10 biggest rice-producing countries, using 2019 production data from the UN’s FAOSTAT and the USDA.

Which Countries Produce the Most Rice?

With 756 million tonnes produced globally in 2019, rice is the world’s third-most produced agricultural crop behind sugarcane and corn (maize), which both have a wide variety of non-consumption uses.

Just 10 countries are responsible for a bulk of global rice production:

At the top of the charts are China (#1) and India (#2), which produced 389 million tonnes combined, accounting for more than half of global production.

They’re significantly ahead of #3 and #4 countries Indonesia and Bangladesh, which produced around 54.6 million tonnes each. Almost all of the top producers are located in Asia, with the exception of Brazil (#10).

With 84% of rice being harvested in just 10 countries, it’s clear that many countries globally must rely on imports to meet domestic demand.

In 2019, India, Thailand, Pakistan, and Vietnam were large net exporters of rice, shipping out nearly $16 billion of rice combined. Other countries including Iran, China, Saudi Arabia, and the Philippines consume above production numbers and rely on imports to meet their needs.

And not everything makes it from plant to table. In developing countries especially, estimates of 8–26% of rice are lost due to postharvest problems and poor infrastructure.

As the global population continues to grow, rice will continue to be a key source of calories around the world—and as our diets change, it’ll be interesting to see how that role shifts in the future.