Walmart Owns Most Of The Supermarkets In Mexico 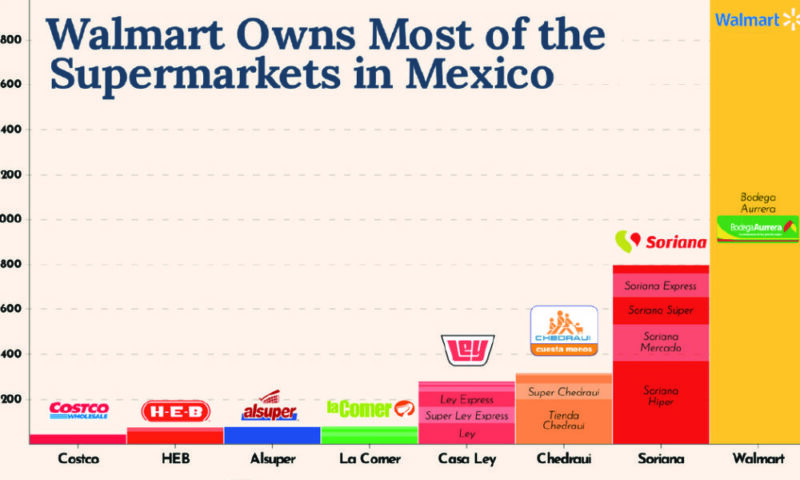 Walmart Owns Most of the Supermarkets in Mexico

The U.S. and Mexico have influenced each other in many ways over the course of their history, through both the exchange of culture and the cross-border trade of goods and services. One lesser-known area of overlap between the two nations? Supermarket ownership.

This article was originally published by Visual Capitalist.

This graphic from Latinometrics ranks supermarket popularity in Mexico by tallying the number of locations per chain, and showing who owns those brands.

When it comes to supermarkets in Mexico, no single company comes close to matching the reach of Walmart. Also the world’s largest company by revenue, Walmart has over 2,700 stores in the country, including chains it owns such as Sam’s Club and Bodega Aurrera. The latter is both the largest supermarket within the Walmart category, and also the most popular in Mexico.

Bodega Aurrera was first established in the 1970s, two decades before Walmart entered Mexico’s market directly in 1991. The discount store now has some 2,000 locations across the country.

In fact, it’s almost safe to say that Mexico is Walmart’s second home. After the U.S., which has just over 5,000 stores, the greatest number of Walmart stores reside in Mexico. But on a per capita basis, there are more Walmart-owned stores in Mexico. Specifically, there is about one Walmart-owned store per 47,000 Mexicans, compared to 62,000 for Americans.

The company’s presence in Mexico is so strong that Walmart’s Mexico division trades separately on the Bolsa Mexicana de Valores (BMV) under the name Walmex. In March of 2022, Walmex had a market cap above 1.3 trillion pesos, or $64 billion.

Overall, with the thousands of stores that they operate, Walmart’s revenue in Mexico gives it a 68% market share within the country’s supermarket industry.

Other American grocery retailers to make the list include H-E-B, a San Antonio-based chain with stores in northeast Mexico, and Costco, which opened its first Mexican location in 1992 as Price Club (before the companies merged).

Sorianna, the next biggest supermarket operator, holds about 15% of the industry’s market share. It is joined by Chedraui, Casa Ley, La Comer, and Alsuper as Mexico’s biggest domestic grocery chains, with some of them also extending their reach into the Southwest United States.