Want To See The World’s Best Library Of 2022? Look No Further! 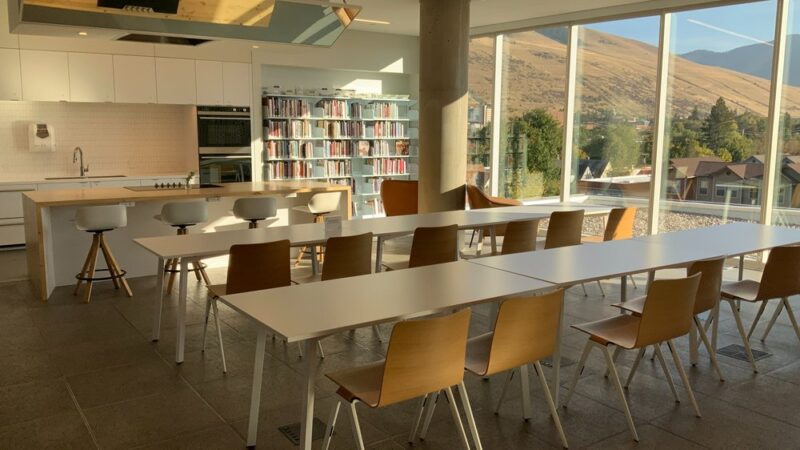 The Missoula Public Library’s demonstration kitchen, where I’d like to make myself a midnight snack.

To the average tourist, Montana is famous for fly fishing, skiing, mountain landscapes, and big skies, but rarely noted as a cultural hub. This is why I was surprised when I picked up my friend Kate up at the airport back in August and she reported that her seatmate from Phoenix to Missoula had waxed poetic for much of the flight about none other than Missoula’s public library.

This article was written by Karla Theilen and originally published by Strong Towns.

I agree that the Missoula Public Library is one of our state’s greatest wonders, so that wasn’t the source of my surprise. It didn’t take being named “Public Library of the Year” by the International Federation of Library Associations and Institutions to sway me, either. I’ve been a fan since the day the library’s doors opened, simply transferring my abiding love for the smaller, darker, older version to the expansive modern masterpiece, built just one block away.

Since its opening in the summer of 2021, I’ve had the locals-only luxury of exploring the library the way people who live in Paris have the privilege of experiencing the Louvre; indulging in one section at a time instead of trying to swallow it whole the way tourists have to choke down all of that art in one gulp.

At the new library you can record a podcast, get assistance with genealogy research, join writing groups, book groups, and watercolor painting classes; you can borrow a laptop for a few hours, or use the maker space for 3-D printing and scanning, even sewing. There are yoga classes, cooking classes, and films to watch. All of a sudden, I feel very busy.

I’ve lingered in the sunlit spaces perusing cookbooks, graphic novels, magazines, art books, and newspapers from around the world. I’ve plunged into novels and memoirs and lazed my way through poetry while lounging on classy, mid-century-style furniture, thinking how good it would look in my living room until one day I realized that the library kind of was my living room.

Up until a few days ago, I’d always zipped up the staircase right past the second level, the children’s section, though not without some level of intrigue. Something I will refer to as a giant Lite-Brite has been calling my name, but the hordes of kids usually deter me; I’m not sure how they would take to a full-sized adult horning in on their fun.

But just the other day, an hour before library closing time, I looked down at the Lite-Brite board as I descended the stairs from the third floor and for the first time ever it was empty, looking lonely without the usual crowd of kids. I accepted the invitation.

A library employee at the entrance to the children’s section in the characteristic green vest asked if I was looking for my child, motioning to a collection of random, unattended kids playing with giant magnets, looking eager to find an adult match for at least one of them.

“It’s just me,” I said, like I was requesting a table for one at a restaurant. “But maybe I’m looking for my inner child,” I laughed, gesturing at the Lite Brite.

I often find myself in situations and places where adults are traditionally accompanied by a child. My sister and I, full-fledged childless adults, were at an indoor trampoline park where a few kids stared on with amazement as we leapt and tumbled, laughing out loud. “Which ones are your kids?” they asked. When we explained we didn’t have any kids they continued, perplexed, “Then are your moms here?” as if that was the only other reasonable explanation.

After I made a Pac Man—for some reason the only thing I could think of—on the Lite-Brite, I ventured off into the shelves of books where a boy who appeared to be about ten years old was asking the children’s librarian about Halloween stories. Halloween seemed out of context from the bright, sunny day that felt more like mid-summer, but it was October after all, and these days the Halloween decorations go up around Labor Day as far as I can tell.

“Not a lot of witches,” he clarified, “but maybe a few. Some magic, but not tooooo creepy—spooky. A little scary is okay,” he mused.

“Do you want fifth-grade scary?” The librarian asked with one raised eyebrow, to which the kid replied, tapping a fingertip to his lips, knitting his brow, “Maybe more like fourth-grade scary.”

“Ah-ha,” she said, leaning in, and in a stage whisper described a story that involved a bus breaking down, a haunted house, and scarecrows coming to life. I watched the kid’s eyes widen as, like magic, she pulled the book she was describing from the shelf.

The library goddess in my world was Ruth Padgett, who lived at the bottom of a wide, granite staircase on the lower level of the Brainerd Public Library; a space that smelled of paper and paste and the insides of books, where a world of possibilities came to life with the creaking open of pages.

From a seat on the floor of the children’s section, I listened in awe as Ruth breathed life into the adventures of Flicka, Dicka, and Ricka—three sisters I liked to imagine were the Swedish version of my two sisters and me—watching her run her fingers under the words, smoothing a palm over each colorful page she turned to flatten out for her audience.

Though the Brainerd Public Library outgrew the original building, the gorgeous old Carnegie Library, in the late 1980s, I’m glad the building still stands to contain my memories, even if it now houses a law office. At least it hasn’t turned into a vape shop; Ruth would turn over in her grave.

Ruth Padgett died in 1998, and the only photo I can find of her online is of her gravestone, where she is immortalized as a loving wife and mother, but there is no mention of her being a librarian. I imagined an etching in the granite of her sitting behind an open book, surrounded by a semicircle of dazzled children.

In the innocent way that children believe they are the center of the universe, I had the notion that Ruth Padgett existed solely for children, and for books. Maybe this is the mythical status people take on when they are doing something they truly love, something they believe in, and maybe it’s children who can see this most clearly.

Back in my adult body in Missoula, I headed out of the books and back to the hands-on discovery area with a simulator that allows you to feel what it’s like when the ferocious winds are whipping down Missoula’s Hellgate Canyon. I actually live in the Hellgate Canyon, so I really didn’t need the simulator, but it was fun to watch the digital numbers climb to 80 mph. Plus, the wind in the plexiglass chamber wasn’t gritty, and didn’t blow my trash can down the alley.

“I’d remove your earrings though,” the green-vested library worker told me before I’d entered the wind tunnel. I reached up to my earlobes to feel the feather earrings I’d forgotten I was wearing. “You never know, you might just fly right out of here,” she laughed.

Which is exactly what I did. Or maybe I floated. Either way, when I left the library that evening with my bike pannier filled with children’s books I couldn’t wait to read, my feet barely touched the ground.