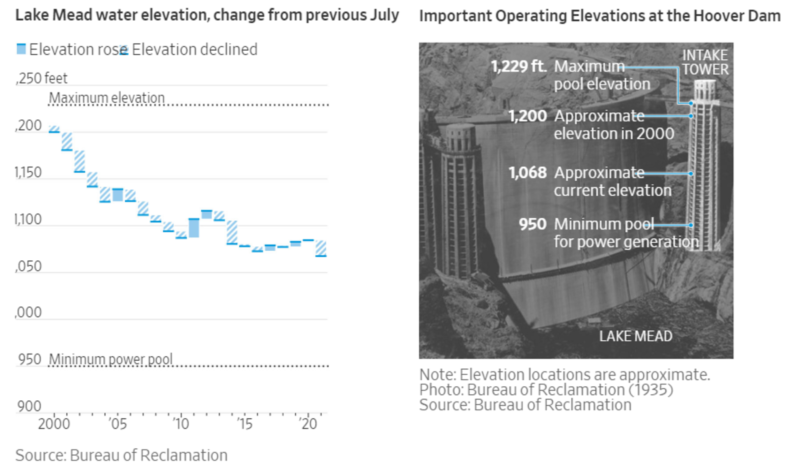 The water level at Lake Mead, the Colorado River reservoir serving the Hoover Dam, fell to 1,068 ft. in July, the lowest level since the lake was first filled following the dam’s construction in the 1930s. This month, the federal government is expected to declare a water shortage on the Colorado River for the first time, triggering cutbacks in water allocations to surrounding states from the river.

If the water level drops 118 ft. from July’s level, to 950 ft., it would fall below the turbines and the dam must shut down, said Patti Aaron, public affairs officer at the U.S. Bureau of Reclamation.

The power declines are significant. At 1,200 ft. water elevation—where it was in the year 2000, when water levels were among the dam’s highest levels—the dam can power up to 450,000 homes. At the current elevation, that figure falls to 350,000.

The California Independent System Operator, or Caiso, which oversees the state’s power grid, last summer resorted to rolling blackouts during a West-wide heat wave that constrained the state’s ability to import electricity. The supply crunch was most acute in the evening, after solar production declined.

Lake Powell is part of the Colorado River Upper Basin and Lake Mead is in the Lower Basin.

Think of Lake Powell and Lake Mead as one big reservoir, connected by a Colorado River canal.

Lake Powell cannot supply Lake Mead with water because Lake Powell is at an even more critical water level than Lake Mead.

State of Emergency at Lake Powell

I discussed the critical nature of this setup in State of Emergency at Lake Powell: Fears of Hydroelectric and Water Shutoffs Mount

Lake Powell is getting an emergency release of water from upstream reservoirs. Water levels have approached a critical level.

The reservoir is projected to hit a critical new low of (1,075 meters) by April 2022, just 25 feet (7.6 meters) above the level at which hydropower can no longer be generated.

California, a Lower Basin state, is using more than its fair share as designated by a 1922 consent agreement.

Utah points that out and has plans for more consumption from Lake Powell.

Realists point out the water level of Lake Powell is down 100 feet since 2000. In another 25 feet, the Lake Powell turbines shut down.

Headed to the Supreme Court

At least 7 states are involved in Colorado River claims, and disputes are rising.

First come first serve and California’s hybrid solution will soon meet reality: There is not enough water to make anyone happy, so something has to give.

This mess is headed to the US Supreme Court because that is the only way state-to-state conflicts are resolved.

Nature Will Have the Final Say

No matter what the Supreme Court decides, nature has the most critical say.

Unless things get suddenly wet and stay that way for a long time someone is going to run out of water or power or both.

The courts might be able to allocate an equitable distribution of available resources. However, the courts cannot produce rain or snow. The bickering states seem oblivious to that simple fact.