Weird Weapons On Their Way 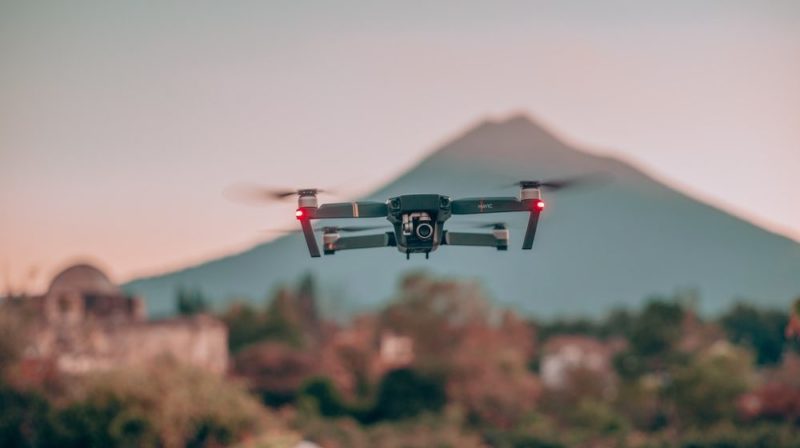 We take for granted how accessible and powerful drones are.

The forests on our property are about to be devastated by gypsy moths, an invasive species that is poised to devastate a lot of forests across Ontario and North America. While a home owner with one or two trees might stand a chance, there’s little for us to do, short of documenting it.

This article was written by Jesse Hirsh and originally published by Axis of Easy.com.

It was with this in mind that I bought a mini drone last year, one capable enough of flying over the tree tops and recording video, but light enough that it did not require a drone pilot’s license or registration.

In purchasing the drone, conducting research, and playing with software, I’ve primed the algorithms to deliver me an endless supply of drone news and links.

A “lethal” weaponized drone “hunted down a human target” without being told to for the first time, according to a UN report seen by the New Scientist.

The March 2020 incident saw a KARGU-2 quadcopter autonomously attack a human during a conflict between Libyan government forces and a breakaway military faction, led by the Libyan National Army’s Khalifa Haftar, the Daily Star reported.

The Turkish-built KARGU-2, a deadly attack drone designed for asymmetric warfare and anti-terrorist operations, targeted one of Haftar’s soldiers while he tried to retreat, according to the paper.

Here’s a product video produced by the company that manufactures these weapons:

It’s not just that this weapon was used in 2020, and that we’re only hearing about it now, but that these weapons are already proliferating.

It may not be alarmist to declare that indeed, the age of autonomous killer robots may be upon us.

However this doesn’t mean that humans are not responsible. Quite the opposite. Let us not indulge in the mythology to believe that autonomous means unaccountable.

In place of rockets, militiamen have turned at times to small, fixed-wing drones that fly too low to be picked up by defensive systems, military officials and diplomats say. An official with the U.S.-led coalition described the evolving drone threat as the military mission’s biggest concern in Iraq.

In April, a drone strike targeted a CIA hangar inside the airport complex in the northern city of Irbil, according to officials familiar with the matter. The drone’s flight was tracked to within 10 miles of the site, but its path was then lost as it moved into a civilian flight path, the coalition official said.

The drone’s remains were partially recovered, and preliminary analysis suggested it was made in Iran, a coalition official said. The attack deeply concerned White House and Pentagon officials because of the covert nature of the facility and the sophistication of the strike.

Drones as weapons enable a kind of asymmetric warfare that can be potent and powerful. In this case enabling a diffusion of proxy forces to use sophisticated weapons supplied by their state based patrons in order to wage remarkably effective attacks.

I suppose this is why the US Army is investing in augmented reality as a replacement for night vision? Need something to identify incoming hostile flying robots.

Which on a larger scale means that drones as weapons, or even drones as unauthorized flying objects, is now fueling an anti-drone industry.

In April, U.S. Army officers met with representatives from Aurora Flight Sciences, a Virginia-based subsidiary of Boeing, to test whether the company’s technology could intercept and bring down an enemy drone. Aurora was one of three companies that took part in the test at the army’s Yuma Proving Ground, just 50 miles from the U.S.-Mexico border in Arizona.

A marketing video shows how the system works: The AI-guided drone uses ground-based radar to locate other drones (called UAVs or UAS, short for unmanned aerial vehicles or unmanned aircraft systems) from range. When it gets close to an “enemy” drone, it “locks on with an onboard sensor” and fires a small projectile. The object fouls up the helicopter blades, and the “enemy” drone falls to the ground.

The demonstration was the first of its kind, held by the Defense Department’s Joint Counter-Small Unmanned Aircraft Systems Office — the Joint C-sUAS Office, also called JCO — and a second one is planned for September. According to U.S. Army Col. Greg Soulé, director of the acquisition and resources division at JCO, who briefed reporters in April, the test came after 35 separate companies submitted white papers in response to a January request for information.

The demonstration was specifically focused on ways to defeat small drones in such a way as to “minimize collateral damage,” said Leland Browning, deputy director of JCO. “For example, if you were operating in urban terrain, and you wanted to minimize the amount of collateral damage from taking out one of these enemy UAS,” Browning continued, acknowledging the risk drones can pose to bystanders and infrastructure.

Granted this is all in the context of military and border agencies. What about police?

There’s a man pacing back and forth in the grocery store parking lot, evidently agitated, shouting at the sky. Concerned, you ring 911. On the phone, a police dispatcher reassures you that someone is coming over to help—and so is a drone. Soon, you hear the telltale buzz of a drone overhead. Through its camera, someone is watching the agitated man in the parking lot, feeding information back to emergency services. They are also, intentionally or not, watching you, and everyone else who happens to wander into the drone camera’s expansive field of view.

In the Southern California town of Chula Vista, drone flights like this fictional example happen dozens of times a day, launched to the scene almost every time someone calls 911. The Chula Vista Police Department’s is the first of its kind, enabled by a special, sweeping 2018 regulatory waiver from the Federal Aviation Administration.

Most everywhere else in the U.S., drone pilots must secure hard-to-get waivers to fly beyond visual line of sight or over people. But in 2018, the Chula Vista Police Department procured a special waiver connected to the Trump-era UAS, or Unmanned Aerial Systems, Integration Pilot Program run by the FAA, which aimed to evaluate how drones can become more involved in American life. That waiver permitted the department to create its “Drone as First Responder” program, which allows police to fly over the entire city using small multirotor drones that are launched and piloted largely from central headquarters. By August 2019, the CVPD was permitted to use drones over 33 percent of the city’s area, and in March 2021, the FAA approved an expansion of the CVPD’s range to cover the entirety of the city. Now, when a call comes in to 911, the dispatcher decides whether to send a drone. The answer is usually yes, in which case the drone launches from the department HQ and flies to the scene of the incident at an altitude of about 300 to 400 feet. All along the way, it records video through a zoom camera lens, streaming footage back to HQ and to responding officers’ mobile devices. The footage is stored in Chula Vista’s evidence.com data repository, where detectives and police can access it, as well as the district attorney’s office. (The department has denied public access to the footage, claiming an exception under the California Public Records Act, but an April lawsuit filed by a San Diego newspaper is challenging this claim). According to the police force, as of March, the drones have flown more than 5,400 missions and played a role in more than 650 arrests.

Why have police wear body cams when they can be followed by a drone cam?

Not all police departments are able to do what Chula Vista can, often for reasons of resrouces.

Although it would seem that Chicago PD found a way around that fiscal challenge.

The Chicago Police Department started a secretive drone program using off-budget cash to pay for the new technology, the Sun-Times has learned.

Details of the police department’s drone program were included in an email sent last summer by Karen Conway, director of police research and development. In the email, Conway told other high-ranking police officials that the department’s counter-terrorism bureau “utilized 1505 funds for a pilot Drone program that operates within the parameters of current laws.”

The drones “have been purchased and the Electronic & Technical Support Unit (Counter-terrorism) is in the process of creating a training to start a pilot. Some of the Drone uses will be for missing persons, crime scene photos, and terrorist related issues,” Conway said in the June 12, 2020, email to former Deputy Supt. Barbara West and Michele Morris, the department’s risk manager.

How do we make sense of all this?

Perhaps we should ask the artists.

In late May, a Predator drone replica, appearing suddenly above the High Line promenade at 30th Street, might seem to scrutinize people below. The “gaze” of the sleek, white sculpture by Sam Durant, called “Untitled, (drone),” in the shape of the U.S. military’s Predator killer drone, will sweep unpredictably over the people below, rotating atop its 25-foot-high steel pole, its direction guided by the wind.

Unlike the real Predator, it won’t carry two Hellfire missiles and a surveillance camera. The drone’s death-delivering features are omitted from Durant’s sculpture. Nevertheless, he hopes it will generate discussion.

“Untitled (drone)” is meant to animate questions “about the use of drones, surveillance, and targeted killings in places far and near,” said Durant in a statement “and whether as a society we agree with and want to continue these practices.”

Durant regards art as a place for exploring possibilities and alternatives.

While I’m tempted to imagine a lethal drone to attack the gypsy moths that are poised to decimate my forest. I can also recognize that responding to an invasive species by enabling a more powerful and artificial invasive species is probably not the best idea.

Weird weapons are on their way. What are you doing to protect yourself?