What Are The Most Produced Cash Crops In Africa? 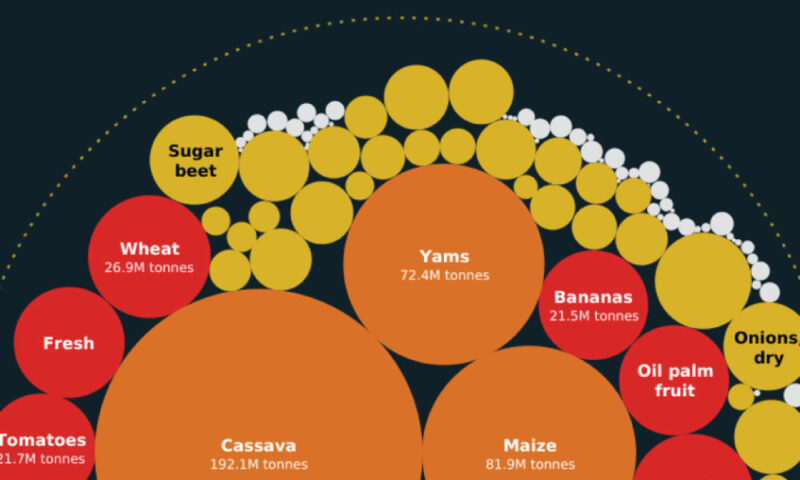 Agriculture makes up nearly 20% of Sub-Saharan Africa’s economy—a higher percentage than any other region worldwide.

From Nigeria to the fertile land across the East African Rift Valley, the continent is home to 60% of the world’s uncultivated arable land.

This article was written by Zainab Ayodimeji and originally published by Visual Capitalist.

Given the massive role of agriculture across the region, this infographic from Zainab Ayodimeji shows the most produced cash crops in Africa and their share of total global production.

The Top 20 Cash Crops in Africa

Cash crops, such as coffee or rice, are crops that are produced for a salable market.

With data from the Food and Agriculture Organization Corporate Statistical Database (FAOSTAT), here are the most produced cash crops in Africa:

Cassava, also referred to as yuca, is the most produced cash crop by a wide margin. With nearly 200 million tonnes of it produced annually, Africa’s production of cassava makes up a majority (63%) of the global total.

While cassavas are not well known in the Western world, they feed 800 million people globally. Cassavas are an essential root vegetable that has similar uses to potatoes.

Notably, Africa’s yam production is 97% of the global total. West Africa is known as the “yam belt,” covering Nigeria, Ghana, Benin, and Côte d’Ivoire. With over 60 million people across the yam belt directly or indirectly involved in its production, yam cultivation is an important component of the region’s economic vitality.

Agriculture Composition of GDP, by Region

While agriculture plays a significant role in Africa’s GDP, what role does it play across other regions around the world? Like Sub-Saharan Africa, agriculture is a major part of South Asia’s economy. India produces nearly 24% of rice around the world, while Bangladesh produces over 7% of total global production. Meanwhile, over 14% of the global wheat supply is also produced by India.

On the other hand, agriculture makes up just 1% of North America’s GDP. The number of farms in the U.S. peaked in the 1930s and has sharply declined from almost 7 million to 2 million in 2020.

The Future of Africa’s Cash Crops

Despite Africa’s expansive agriculture sector, there remain bottlenecks to productivity.

In light of these challenges, several technological advances have the potential to improve farmers’ bottom lines. For instance, precision technology measures rainfall, soil information, and soil productivity. At the same time, remote sensing technology can provide information on weather and climate.

This, coupled with the majority of the world’s uncultivated arable land, presents a significant opportunity for cash crops going forward. By one estimate, cereal and grain production has the potential to increase threefold.